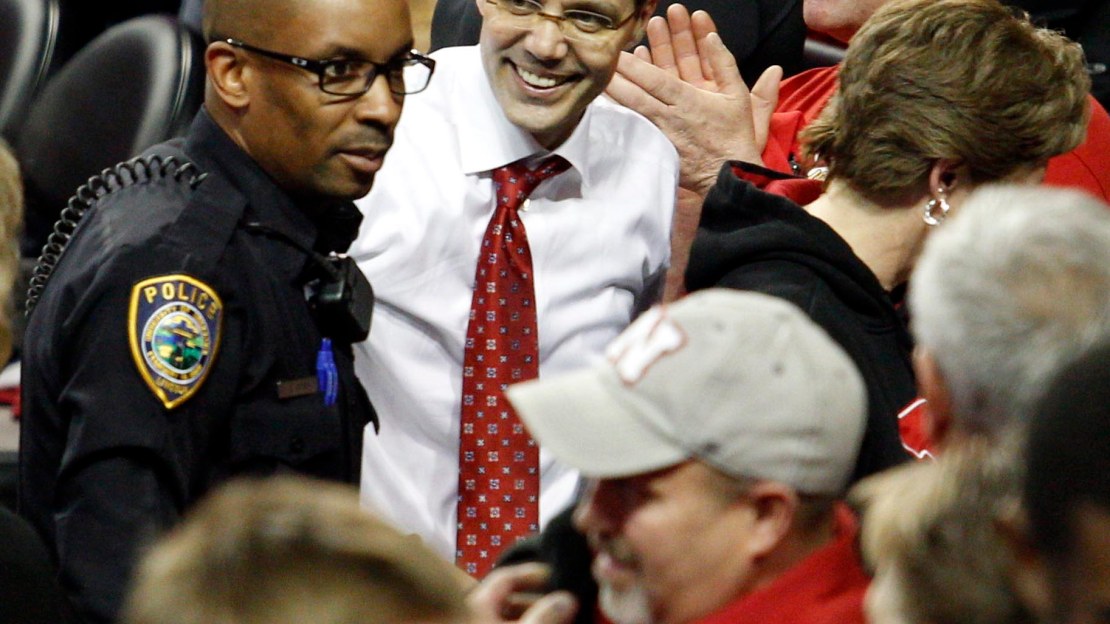 Nebraska secured perhaps the best win ever at Pinnacle Bank Arena when it took down the Badgers last night. The Huskers got 26 points from each of Shavon Shields and Terran Petteway, the latter of which is making a push to be included on the All-Big Ten 1st team.

Judging from the tone of Tim Miles? postgame speech to his team, it sounds like Nebraska thinks it?s in the Dance.

VIDEO: Our cameras were in @Huskers locker room for @CoachMiles' postgame talk to @HuskerHoops. WATCH – http://t.co/afLZCAQqH8

Right now, the crowd seems to agree, but barely. They?re part of the last four in, so the team could certainly use one more victory in the Big Ten Tournament.

The loss probably didn?t do too much to Wisconsin?s postseason hopes. The Badgers were already locked-in as a 2-seed in the Big Ten Tournament prior to tip-off, and realistically a great performance in Indianapolis is going to outweigh last night?s loss. The likeliest scenario is that Bo Ryan?s team ends up as a 2-seed in the Dance as well, but a run to the Big Ten title game could change all that.

Illinois staved off a last-place finish thanks to a three-pointer by senior Jon Ekey with 00.5 seconds remaining. Illinois got off to a fast start in this game, opening up a 20-6 lead in the first seven minutes. Much of that attack came from Nnanna Egwu, who exploited Iowa?s still-abysmal interior defense.

As for why Iowa?s defense stinks right now, Illinois scored a lot of points off putbacks, as John Groce?s team captured 40 percent of its misses. But that hasn?t been a big issue for Iowa over the conference season. Another problem is that Iowa might be too tall for its own good. Rather than have one of his bigs guard the likes of Rayvonte Rice, Fran McCaffrey frequently had players like Josh Oglesby trying to check the Illini guard. Oglesby is tall enough, but he gives up 30 pounds or so to Rice.

I still think Iowa can do some damage in March, but this defense is putting a lot of pressure on the offense. At a minimum, the Hawkeyes should keep the defensive glass clean. If they?re going to allow open looks, at least try to keep it to one look per possession.

John Groce?s team has been all over the map, but it?s hard to see this team putting a real run together in the Big Ten Tournament. It?s just too easy for this team to go ice cold, and the single elimination format won?t do the team any favors there.

Northwestern pulled a nice upset to drag Purdue down into last place with it. Drew Crawford had a nice ending to his regular season career, with 27 points on 13 shots. That was enough to propel the Wildcats to their second-best offensive output in conference play. Another bright spot was the much-maligned Dave Sobolewski, who converted on all 8 of his free throw attempts and had just one turnover.

Purdue was led by Raphael Davis, who had 13 points on 9 shots.

Minnesota put together a nice ?eye-test? game for the Committee by dismantling Penn State by 18. Five players scored in double-figures for the Gophers, who got an especially strong performance out of backup center Maurice Walker (16 points on 5 shots).

Usually after a game like this, the coach would kick off a stump speech about how ?I don?t know how anyone could put 67 teams ahead of us,? and ?I think we?ve proven we belong in the NCAA Tournament? and all of that. Not Richard Pitino.

Richard Pitino was asked if he'd have the #Gophers in the NCAA tournament if he were on the committee. "Right now, no."

Is he refreshingly honest? Too reckless? Eschewer of coachspeak, or naive to how the game is played? All I know is that he?s entertaining.

Ohio State held on at home against Michigan State, thanks to some great on-ball defense from Aaron Craft.

Well, unless you?re a Michigan State fan. Then you might have seen it differently:

Not to be that guy, and you're not going to get this call, but I mean… pic.twitter.com/ttmmsTroOL

Thus, Ohio State finishes the regular season as about the same team we thought they would be-as a dominant defensive team that is prone to droughts on offense. Ohio State can make sound noise in the Dance, but just how much might depend on how tightly the games are called. Calling it fouling or call it physical, but there?s no question that Craft and Shannon Scott aren?t afraid to pressure ballhandlers. A loosely-officiated contest probably plays to the Buckeyes? strength.

Mike and I will have more on this later today when we sum up the season, but this has not been the year that most envisioned out of Michigan State. Sure, injuries played a part, but even when all hands are on deck this hasn?t been the top-5 team that most expected. Of course, Tom Izzo is at his best in March, and he?s taken worse teams to basketball?s final weekend. It?s not over, yet.

Indiana gave a scare to Michigan, but came up short in Ann Arbor. The ?we beat ourselves? cliché is too dismissive of the winning team, but Indiana largely beat themselves in this game. The Hoosiers shot a blistering 71 percent on 2s, 39 percent on 3s, and 88 percent at the free throw line. On the rare 20 occasions a live ball did not go through the net, the Hoosiers got the rebound 6 times. That means there were just 14 times when an Indiana possession ended without points, when the Hoosiers got a shot off.

Of course, that omits the 15 times the Hoosiers turned it over. And yes, give credit for John Beilein daring IU into some of those turnovers by going zone, but it might be coaching malpractice not to zone Indiana these days.

Really just need to sit back in a zone against Indiana and wait for them to beat themselves. Nice change-up by Beilein.

Michigan, meanwhile enters the postseason as a team that still doesn?t bother with defense, but will probably beat you anyways.The Wolverines are one of the best-shooting teams in the country from the outside, and Beilein?s spread system allows for easy finishes inside the arc as well. The perimeter-focused approach, along with three capable ballhandlers on the floor most of the time also ensures the minimum number of turnovers.

Thus, the regular season comes to a close, and the real fun begins on Thursday in Indianapolis. Be on the lookout later today for some final regular season thoughts from Mike and me, as well as our annual Geek awards.