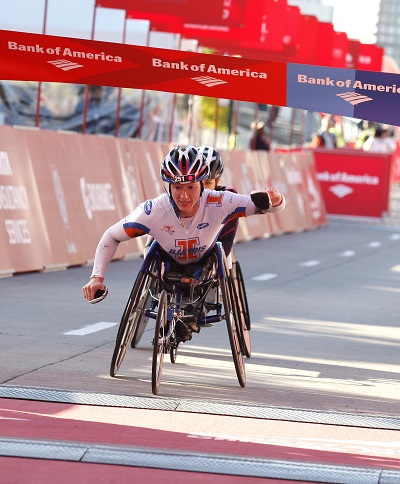 For a handful of universities across the country, an iconic athletic program is intertwined with its institution's identity — to the point that many instinctively associate school and sport.

But one collegiate program, while flying under the national radar, boasts a decades-spanning dynasty that belongs alongside and perhaps atop that elite collective: you'll find the hub of world-class wheelchair athletics at the University of Illinois. And, as the 2014 Winter Paralympic Games begin in Sochi, Illini will once again be in the spotlight.

"In my own biased opinion, it's the best place in the world to come to if you want to be a world-class para athlete," said Adam Bleakney, coach of the Illini men's and women's track, field and racing teams. "We have a long tradition of success for producing some of the best in the world in wheelchair racing and athletics."

At Illinois, Bleakney has had the advantage of building on an unshakable foundation. After the university became the first in the country to establish wheelchair basketball programs (1948 for the men; 1970 for the women), pioneering racing coach Marty Morse arrived to help mold Jean Driscoll and Bleakney himself into famed Olympic athletes.

As recently as the 2012 London Games, Bleakney, the 2007 USOC Paralympic Coach of the Year, competed alongside a contingent of his own Illinois student-athletes at the highest level.

"It seemed like this was the mecca," Illinois' Aaron Pike recently told the News-Gazette, speaking about his alma mater. "It all started here and spread. It had deep roots. I kind of like that about the school, there's a lot of tradition. You see a lot of people who went to the Paralympics, and you knew that was possible, coming here."

Pike competed with Bleakney in London as part of a massive delegation of Illinois athletes — of the 227 Paralympians on hand at those Games, 28 were current or former Illini student-athletes.

Even now, Pike and Illinois' most decorated current star, Tatyana McFadden, are in Sochi to compete in the 2014 Winter Games. McFadden — a 10-time Paralympics medalist who became the first athlete to pull off the grand slam of wins in the 2013 Boston, Chicago, London and New York marathons — chose to enter the biathlon and cross-country skiing events in Sochi on a lark. But it's a testament to the facilities and infrastructure at Illinois, Bleakney says, that allows athletes such as McFadden to thrive in whatever endeavor they choose.

"The reason the student-athletes come is the unique opportunity it offers them, academically and athletically," Bleakney said. "We have the best support staff in the world, from the trainers to the physical therapists to the administrators, and on down.

"The alumni often stick around, becoming part of the community, and they act as role models to the younger athletes. That, to me, makes my job so easy. You can't match that."

And it isn't merely the athletes who benefit. At Illinois, the Disability Resources & Educational Services program (DRES) is widely considered one of the most comprehensive and influential of its kind. In addition to overseeing the wheelchair athletics departments, it has been integral in creating an environment and opportunities to allow all disabled students on campus to flourish.

As stated on its website, the DRES program is charged with providing students with ?academic accommodations and access? and has, in recent years, committed itself to ensuring those same services for students with "nonvisible disabilities." Those services range from accessible transportation and housing to on-campus physical therapy and support groups to organization and time management coaching.

For example, with two full-time physical therapists and the DRES gym at their disposal, Illinois' disabled students are encouraged to be physically active and can be coached through range-of-motion exercises and receive assistance in developing exercise programs that have immediate and long-term value. Said Maureen Gilbert, the university's DRES Campus Life Coordinator: "After they move on, they can teach someone else how to work with them."

And that, ultimately, is the goal, according to Gilbert: DRES is designed to empower students with disabilities, not only providing equal opportunity for education and a vibrant campus experience but also ensuring that those students have the knowledge and confidence to advocate for themselves and others with disabilities after they leave campus.

For information about this remarkable program, visit their website.