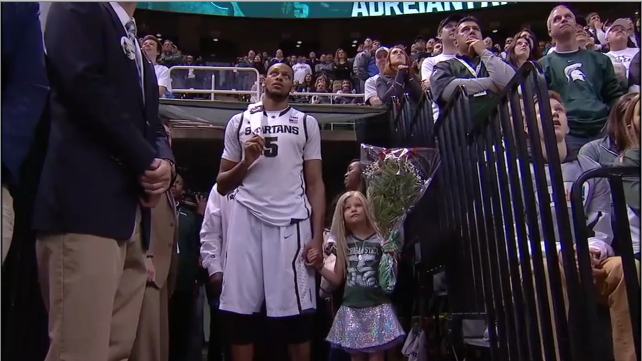 It's a story that can make just about anyone tear up. Several years ago, there were worries about whether 8-year-old Lacey Holsworth would ever walk again. Tonight, she did just that, with her hero, Adreian Payne, right by her side.

Holsworth accompanied Payne on the Breslin Center court for his senior day ceremony, following the Spartans 86-76 win over Iowa.

Payne and Lacey were introduced a couple years back after he and other members of the MSU basketball team visited her in the hospital. She had just been diagnosed with neuroblastoma, a large tumor in her abdomen wrapping around her spine and paralyzing her for a couple months.

BTN's "The Journey" did a feature on Holsworth last year, telling the story of her relationship with Payne.

Since meeting Payne, Lacey, or Princess Lacey as she goes by on Twitter, regained her ability to walk and appeared to be on her way to being cancer-free this past fall. But the cancer came back in November, and Lacey is still battling it today.

In honor of Lacey, members of the Izzone wore the following shirts to Thursday night's game, which read "one step closer," with a picture of a Green and White heart-shaped basketball, with a princess crown on top.

Payne also thanked Lacey and her family during his senior speech and asked Michigan State fans to please continue to pray for her.