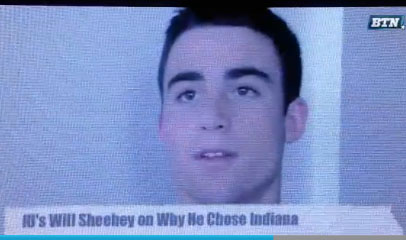 The star player of Indiana's senior class usually has so many people to thank and so many great memories to share during the team's annual Senior Night ceremony. On Wednesday night, Sheehey, the star of Indiana's 2014 senior class, spoke for 56 seconds. One longtime Indiana scribe thinks it might have been the shortest such speech. Either way, Sheehey made the most of the 56 seconds and left with a bang.

VIDEO: @IndianaMBB's Will Sheehey kept his Senior Night speech short and sweet. And, he nailed it. WATCH – http://t.co/uiJCeAl65G

Indiana also ired a special tribute video to its seniors on the big board following Wednesday night's game vs. Nebraska at Assembly Hall. The seniors, highlighted by Sheehey, helped make Indiana basketball relevant again. Check out the video featuring the top moments for Sheehey, Jeff Howard, Evan Gordon and Taylor Wayer in this post.

VIDEO: Here's the video tribute to the @IndianaMBB seniors that played on the big board at Assembly Hall. WATCH – http://t.co/PoaDl9lXmE