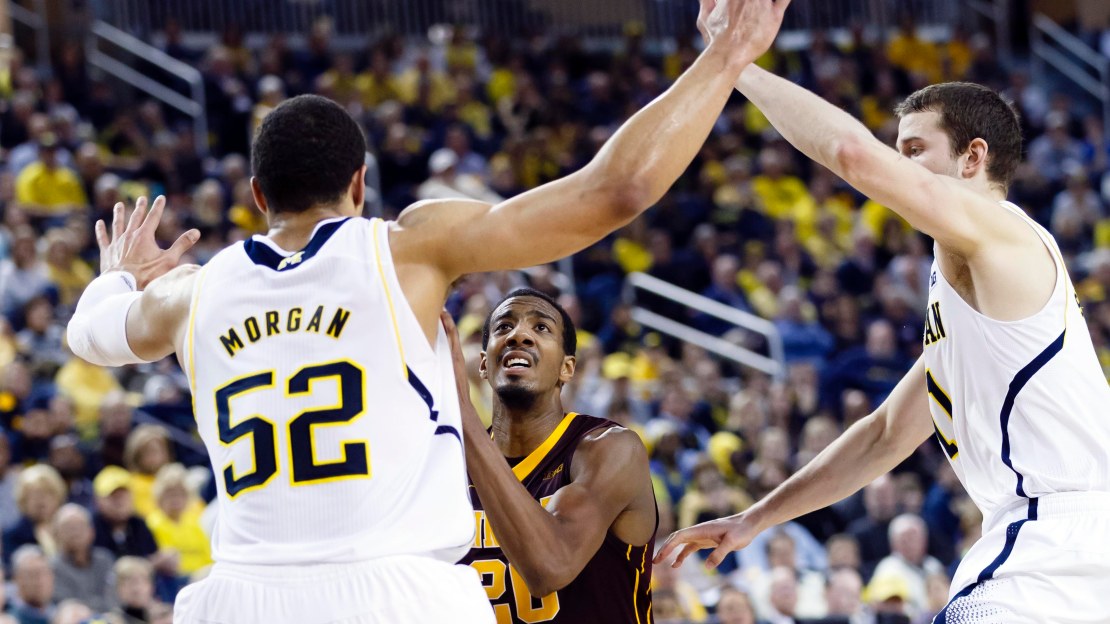 We have a Big Ten champion! No. 16 Michigan claimed a share of the Big Ten crown with its win over Minnesota on Saturday. Win one of its final two games, and Michigan will be the outright champ for the first time since 1986. In other action, Illinois upset No. 18 Michigan State and Nebraska swept Northwestern. Catch up on all the day's action and video highlights in this post.

MICHIGAN 66, MINNESOTA 56 | RECAP | BOX | PLAY-BY-PLAY
(AP) Nik Stauskas scored 21 points and Glenn Robinson III provided an emotional lift with his dunks as No. 16 Michigan clinched at least a share of the Big Ten title with a 66-56 victory over Minnesota on Saturday night. The Wolverines (21-7, 13-3) didn't arrive at the Crisler Center expecting to have a chance to lock up their third banner in three years, but Illinois changed that by upsetting Michigan State in East Lansing.

MUST SEE: @umichbball sophomore Glenn Robinson III just threw down a dunk that will make your jaw drop. WATCH – http://t.co/MLgxVym3rZ

VIDEO: Got to like this, @MSU_Basketball fans: Branden Dawson gets quick bucket in his much-awaited return. WATCH – http://t.co/i1CBuvCCnJ

NEBRASKA 54, NORTHWESTERN 47 | RECAP | BOX | PLAY-BY-PLAY
(AP) Shavon Shields had 17 points and 10 rebounds to lead Nebraska, which took a 10-point lead with 7 minutes left and held on to defeat Northwestern 54-47 Saturday. With the win, Nebraska (17-11, 9-7 Big Ten) is guaranteed a top-six finish and .500 conference record, both Big Ten firsts for the Huskers, now in their third season in the conference. Nebraska won nine conference games for the first time since 1998-99 and only the 10th time since World War II.