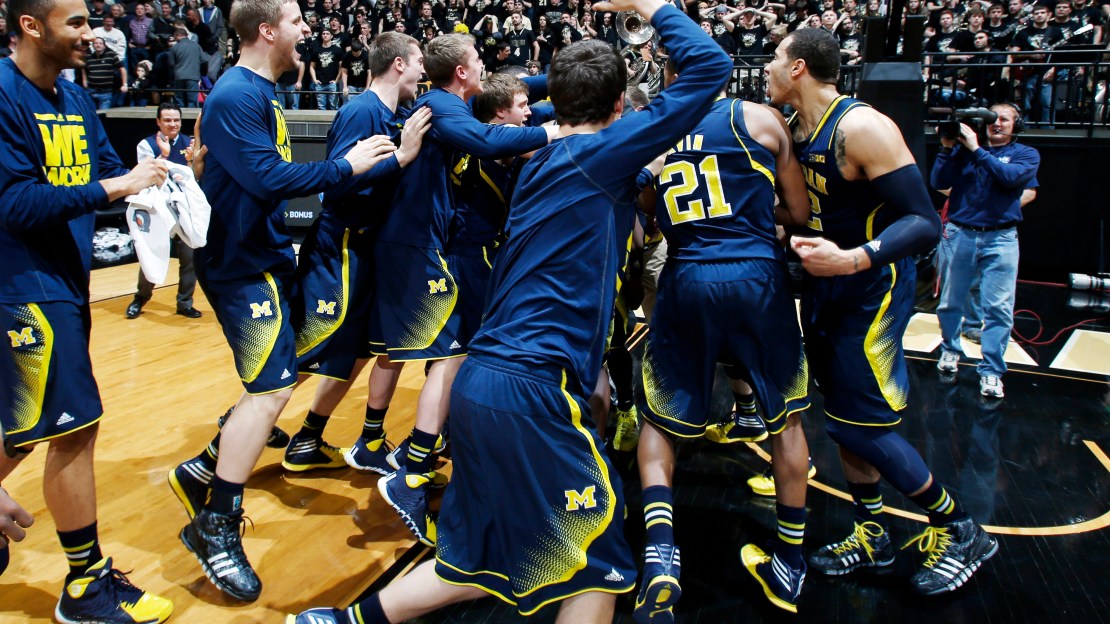 An interesting week in the Big Ten, as Michigan surged to the top of the conference as it looks for its outright conference championship since the 1985-86 season.

Wisconsin also is rolling. What has happened to Iowa? Check it all out in this week's Three-Pointers, and use our scoreboards to get updated TV info and times for this weekend's six games.

1. Michigan. What a week for the Wolverines, who have to feel like a team of destiny after pulling out that miraculous overtime win at Purdue on Wednesday night. Michigan opened the week with a home victory over Michigan State on Sunday. Yep, it?s good to be a Wolverine. You have to like Michigan?s chances to win out with games left vs. Minnesota, at Illinois and vs. Indiana.

2. Wisconsin. The Badgers just can?t be stopped, riding a six-game winning streak with wins over the likes of Michigan State, Michigan and Iowa. Prior to that, Wisconsin had lost five of six games and was 4-5 in the Big Ten. This team is rolling. How good is Bo Ryan?

3. Michigan State. Yes, the Spartans lost that showdown game at Michigan on Sunday and are just 4-5 in their last nine games. Still, MSU is just a game off the pace. And Branden Dawson is coming back to the lineup after being out with a broken hand. Gotta like the Spartans? chances to win-out vs. Illinois, vs. Iowa and at Ohio State.

1. Iowa. The Hawkeyes too often this season have been a mystery wrapped in a riddle, losing some games you swear they shouldn?t lose. Where is the defense? Woof. The club has lost a season-high three games in a row, falling at home to Wisconsin and getting beat on the road at Minnesota and Indiana-neither of whom was playing well. That basically ended any faint league title hopes for Iowa and cast more doubt on the Hawkeyes? postseason viability.

2. Nebraska. Don?t be too quick to sell the Huskers, but their five-game winning streak came to thud at Illinois on Wednesday. Nebraska is 8-7 in the Big Ten. Most pundits think the Cornhuskers need to go 10-8 and win a game in the Big Ten tourney to reach the NCAA tourney for the first time since 1998. The remaining games: vs. Northwestern, at Indiana, vs. Wisconsin. Things could get interesting.

3. Ohio State. The Buckeyes looked to be over their mid-season blues that saw them lose five of six games. Ohio State had won six of seven games. Thad Matta?s crew appeared to be peaking at the right time. Then, the Buckeyes lost at last-place Penn State last night. Pfffttttt.

1. Sorry, Tim Miles. But John Beilein has all but sewn up Big Ten Coach of the Year honors. He has Michigan poised to win its first outright league title since 1985-86. And he?s doing it without Mitch McGary, who has played just eight games because of a back ailment. Oh, and the Wolverines also lost league player of the year Trey Burke after last year.

2. While the Big Ten may lack an elite team, the good news is there really doesn?t appear to any elite teams in the nation. What?s it mean? It should be a really fun March, as there are a lot of evenly matched teams. In fact, there are more than ever. It's gonna be all about your draw.

3. Unlike the coach of the year race, there is no clarity in the player of the year race. Who is it gonna be? Nebraska?s Terran Petteway? Michigan State?s Gary Harris? Michigan?s Nik Stauskas? Iowa?s Roy Devyn Marble? I have no idea.

A battle between the Big Ten?s top teams lived up to its billing. And, for the second time this season, the Wolverines topped the Spartans. The win was fueled by 25 points from Nik Stauskas and it gave first place to Michigan, which has won six of the last eight meetings. Can you feel the tide in this rivalry turning? Sure you can.

Not many people saw this coming. The Gophers had lost six of eight games, their NCAA tournament dreams fading. But this victory put Minnesota back on track, as Austin Hollins scored a career-high 27 points. In their previous two games, losses to Illinois and Ohio State, the Gophers scored an aggregate 95 points. They matched that total in this game.

The improbable win vs. the No. 22 team in the nation kept alive the Nittany Lions? postseason hopes. The victory also gave Penn State a sweep of the season series with the Buckeyes. Who saw that coming, right? D.J. Newbill?s 23 points led the way vs. an OSU team that had won six of seven games. Since starting 0-6 in the Big Ten, the Nittany Lions have gone 5-4.

Three games to look forward to

1. Michigan at Illinois, Wed., March 4. The Wolverines are clinging to a one-game lead, so each game is big. Michigan almost lost at Purdue on Wednesday. This trip to Champaign has ?danger? written all over it. The Fighting Illini are playing well after enduring an eight-game losing skid that threatened to torpedo the season. Illinois has won two in a row and three of five games.

2. Nebraska at Indiana, Wed., March 5. The Cornhuskers are battling for their NCAA postseason life. And this is a game they probably will need to win. The Hoosiers are having a season to forget but still would like to finish strong. The home win vs. Iowa last night was a start. Nebraska beat IU, 60-55, earlier this season in Lincoln.

3. Iowa at Michigan State, Thurs., March 6. This game could have a whole lot of meaning for the Spartans. A win in East Lansing would do wonders for the psyche of the Hawkeyes, who lost at home earlier this season to MSU, 71-69, and are riding a season-long three-game slide.