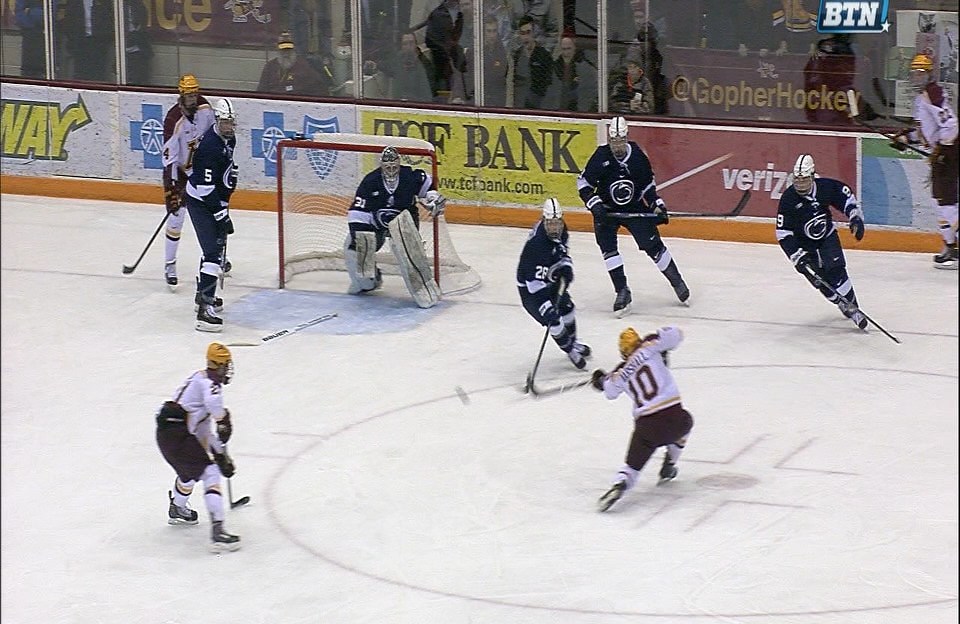 We had two Big Ten men's hockey games on Friday night. In the first game of the night, Ohio State and Michigan skated to a 2-2 tie, with the Buckeyes notching a 1-0 win in the shootout. In the second game of the evening, No. 2 Minnesota cruised to an impressive 5-1 victory over Penn State at Mariucci Ice Arena. Catch up on all the scores, stats and highlights in this post.

Sophomore Kenny Brooks' (Las Vegas, Nev.) power-play goal gave the Nittany Lions the early lead, but the Penn State men's hockey team fell to No. 2/2 Minnesota, 5-1, at Mariucci Arena Friday night. The Nittany Lions fell to 6-21-2 overall and 2-12-1-0 in the Big Ten, while the Gophers improved to 22-4-5 and 11-2-2-0, respectively. A Las Vegas, Nev., native, Brooks put the Nittany Lions up by a 1-0 score 3:12 into the game. The Gophers then responded with three goals in the first period and two more in the second frame en route to the 5-1 score.

Check out @GopherHockey super freshman Taylor Cammarata put in this power play goal to give Minnesota a 4-1 lead. – http://t.co/k5e5Z7xfOb

This is what a picture-perfect breakaway looks like. Hudson Fasching sets up Kyle Rau for the @GopherHockey goal. – http://t.co/qZoiq5layk

This may be the craziest goal we have seen in @B1GHockey this year. Hudson Fasching credited with the goal. WATCH – http://t.co/wFxYTx1kjr

Just like that, @GopherHockey ties it up at 1-1 on this laser shot from junior Sam Warning. WATCH – http://t.co/eC7ptVngma

How about this for a start? Kenny Brooks scores the power play goal and gives @PennStateMHKY an early 1-0 lead. – http://t.co/FU2paPF308

The Ohio State men?s hockey team skated to a 2-2 tie at No. 13 Michigan and then won the shootout, 1-0, to pick up the extra point in the Big Ten standings Friday in Yost Ice Arena in Ann Arbor, Mich. Buckeye freshman goalie Matt Tomkins made 35 saves in the game, while senior Alex Szczechura scored in regulation and had the lone shootout tally.

Game. Set. Match. @OhioState_MHKY's Alex Szczechura puts in this goal to give the Buckeyes a shootout win. WATCH – http://t.co/kXIYU0ECMU

He shoots… He scores! @umichhockey forward Alex Guptill puts in his second goal of the game for the Wolverines. – http://t.co/U9HokBmuWF

How nice was this? Alex Szczechura gets a rebound and puts in the goal to give @OhioState_MHKY a 2-1 lead. WATCH – http://t.co/dUyE25OLUs

Goal! @umichhockey's Alex Guptill scores and ties the game at 1-1 late in the first period. – http://t.co/IGoFwh2eWH

How about that for a start? Check out @OhioState_MHKY freshman Nick Schilkey go backdoor to give OSU a 1-0 lead – http://t.co/WXw4xkGz1n