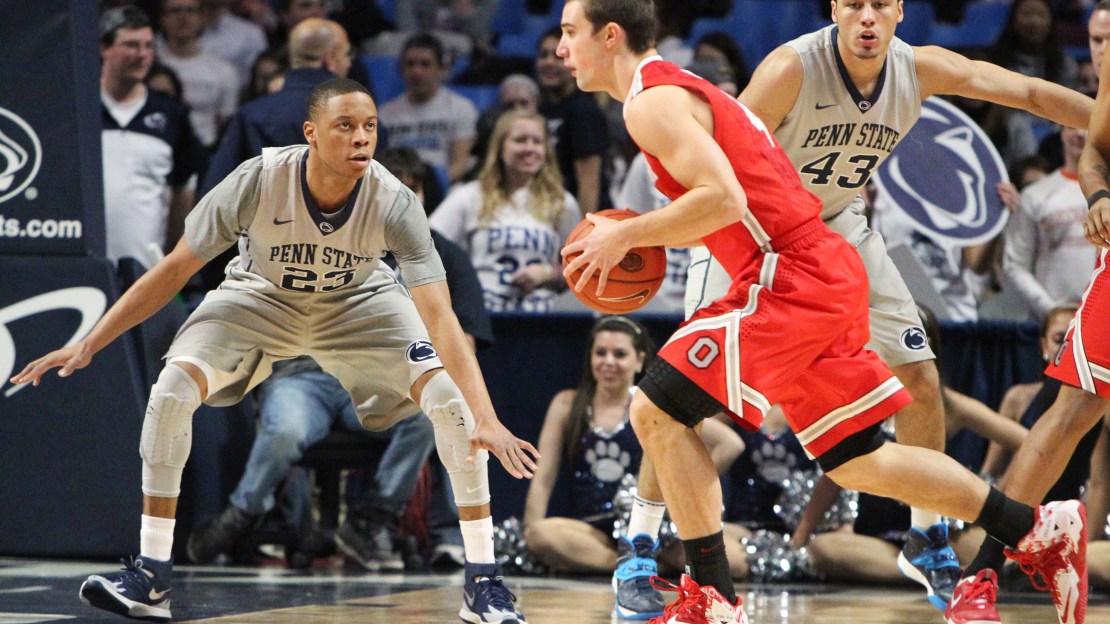 Certainly the Buckeyes didn?t want to lose in State College, Pa. I mean, this was an Ohio State club that had won three in a row and six of seven games. The only loss in that stretch was to Michigan. Respectable. I guess I thought OSU was beyond losing to last-place teams-even on the road. Aaron Craft wasn?t too pleased after the defeat.

How good is this team? I?m confused.

Iowa?s perplexing season continues. The loss at Indiana was the Hawkeyes? third in a row. It wasn?t too long ago that Iowa still had a shot to win its first regular-season title since 1978-79. Now, this team may end up 9-9. The defense in Iowa City has gone from average to, well, atrocious. The Hawkeyes have allowed 95 and 93 points in their last two games.

Don?t laugh. It could happen. Credit the coaching of John Groce. The NCAA tourney is a long, long shot. But the NIT and CBI are possibilities. To land in either, Illinois probably needs to .500 overall.  By moving to 16-12 overall, Illinois can finish no worse than .500 with losses in the final three regular-season games and an opening loss in the Big Ten Tournament.

He?s back! That?s right. Michigan State man-child Branden Dawson will return for the Spartans? game vs. Illinois. But how much will he play? Dawson hasn?t laced ?em up since Jan. 21 after breaking a hand. And here is some video of Dawson talking about his comeback.

The Spartans were 18-1 when Dawson broke his hand in a film-session Jan. 23 and are 4-5 in the nine games since. See the connection?

Added weight and confidence have made Buggs a contributor on a team that seems to be headed to an improbable NCAA tourney bid. I still can?t believe Minnesota may make the NCAA tourney and Indiana may not.

Looks like Iowa quarterback Cody Sokol is looking to transfer. No big whoop, seeing as how Jake Rudock has solidified the spot. This happens all the time.

New Michigan offensive coordinator Doug Nussmeier is in the process of doing his thing in Ann Arbor with spring drills underway.

Sounds like Nussmeier would like to go at a quicker tempo. He also wants to play multiple backs. This is going to be fun and interesting to watch.

#huskers Still tied for 5th and just half game out of 4th after Iowa and Ohio St. lose too. #wastedpanic #nebrasketball

My take: Yep, all of those upsets helped the Huskers.

Cory Ross on Abdullah: "I think he can do what Danny Woodhead is doing for the Chargers, if not more." #Huskers

My take: Don?t you love fans?

Just talked to Ohio State players. That is probably the angriest I've seen Aaron Craft after a game in four years.

My take: He should be angry.

Hayden Fry turns 85 on Friday. Remember to take time from agonizing over the state of the IA men's b-ball team to wish him a happy b-day.

Weird team, this Indiana. Beats Michigan, Iowa, Wisconsin and loses to Northwestern and Penn State — all at home.

My take: Don?t try to figure it out. Just enjoy the weirdness.

John Beilein a finalist for Henry Iba National Coach of the Year Award.

My take: He?s a fine candidate.

So Iowa loses at IU and drops to 8-7 in league and 19-9 overall. W/that talent+experience record should be better.

My take: Not gonna disagree.

Prior to being swept by Penn State tonight, Ohio State hadn't lost twice in regular season to a Big Ten foe since 2008-09 (MSU, Illinois).

My take: Speaks to how good OSU has been.

After starting 0-6 in conference play, Penn State is two wins from finishing .500 and NIT consideration.

My take: Pat Chambers can coach a little, huh? Can?t wait for Wisconsin?s visit to State College this weekend.

Penn State may have the best homecourt advantage in the Big Ten. Its sleepy atmosphere creates a letdown for any opponent.