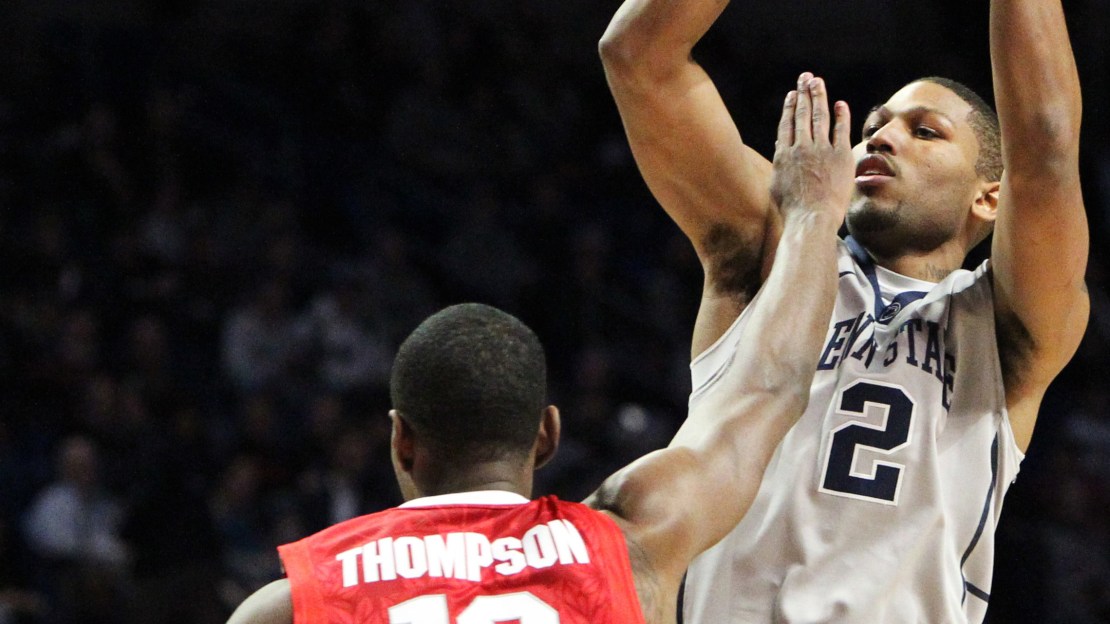 Penn State celebrated an early senior night (the Nittany Lions still have another home game remaining, but I guess they didn't like their chances against Wisconsin) by rallying from an 11-point first half deficit to take down Ohio State. PSU got a big game out of junior guard D.J. Newbill (23 points, 9 shots), who had a better game than LaQuinton Ross (19 points, 12 shots). I mention those two because, outside of them, there was not a lot of offense. Tim Frazier had 16 points, but it took 12 shots to get there and it came with 6 turnovers.

He wasn't the only turnover-happy point guard, as Ohio State's senior leader Aaron Craft finished with five of his own (against 4 assists). Speaking of Craft, his conference-play numbers at this point in the season look just like they have the previous four:

Craft's shooting is all over the place, but I included that last column for some context. As a junior, Craft shot the ball a fair bit more than usual, and as a result his accuracy suffered. Otherwise, he's a very selective shooter and not generally someone that can be counted on to score. He's also not much of a point guard, for that matter, given his typically high turnover rate that generally matches his assist rate.

This isn't a bad player, mind you, but is this guy really the 6th-best player in college basketball? Is this the first player you'd pick if you could pick any college basketball player? Obviously, Craft's talents lie on defense, but I submit that such lofty praise be reserved for players that are at least average on both sides of the ball.

(And thus concludes my 504th, and likely last, harangue on Aaron Craft. No promises that I won't make them into a book someday. That is the end-game for blogging, isn't it?)

On Wednesday, Purdue lost a heartbreaker when it blew a 19-point lead and ended up losing to Michigan in overtime. Against the Wolverines' soft defense, the Boilermakers "exploded" to the relative tune of 1.10 points per possession, but their poor last-second defense allowed Glenn Robinson III to finish something akin to a hail-mary inbounds play. The sophomore forward finished the night with 17 points (11 shots) and 8 rebounds, as he's starting to increase his production toward the end of the conference season. With just three games remaining against teams in the bottom-half of the standings-two of those at home-Michigan appears to be a lock to at least get a share of the title, and a fair bet to take sole ownership.

For Purdue, the season can't end soon enough. This has been one of the most disappointing seasons for any team in the country, and with two road trips to Iowa City and Madison looming, it's probably going to get worse before it gets better. The good news is that, on paper, Purdue looks like it should improve for next season. The bad news is that, on paper, you could have said the same thing 12 months ago.

Iowa's suddenly-suspect defense managed to give up 93 points to Indiana in a road loss. The gory details include the fact that not only did Will Sheehey manage to score 30 points (his previous high in conference play this season was 13), but somehow did so by hitting on 11 of his 13 two-point attempts. After starting out strong on defense, Iowa has allow the opponent to score at least a point per possession in each of its last 8 games. If the Hawkeyes intend to make some noise in the NCAA Tournament, reversing this trend would be a good place to start. As one of the tallest teams in all of Division I (just Kentucky, Florida State, and UTEP stand taller, per kenpom), Iowa's permissiveness inside the arc is inexcusable

INSTANT HIGHLIGHTS: Check out all the top plays from Indiana's memorable 93-86 victory over Iowa. – http://t.co/roAgY9FGmg

Finally, Illinois put together its first winning streak since it was 2-0 in conference play, by pulling away from Nebraska in the second half. The Illini seized control of the game with a 12-0 run near the beginning of the second frame, and it was once again the freshmen leading the way.  Kendrick Nunn and Malcolm Hill combined for 23 points on just 9 shots, which went a long way in overcoming a collective 7 for 31 performance from Tracy Abrams, Nnanna Egwu, and Rayvonte Rice.

But the real story of this game was defense, as Illinois held the Cornhuskers to just 0.83 points per possession. In fact, don't look now but the Illini actually have the 3rd-best defense in the Big Ten on a point per possession basis. Of course, such a distinction may be fleeting as just 0.03 points separates 3rd from 6th, and Illinois still has to face the offenses of Michigan State, Michigan, and Iowa to finish the season. Still, it's a nice silver lining on what's been a gray cloud for Illinois this season.

Nebraska's at-large hopes remain alive, though just barely. The Huskers cannot afford another regular season loss, or else they probably have to make a real run in the Big Ten Tournament to hear their name called on Selection Sunday.