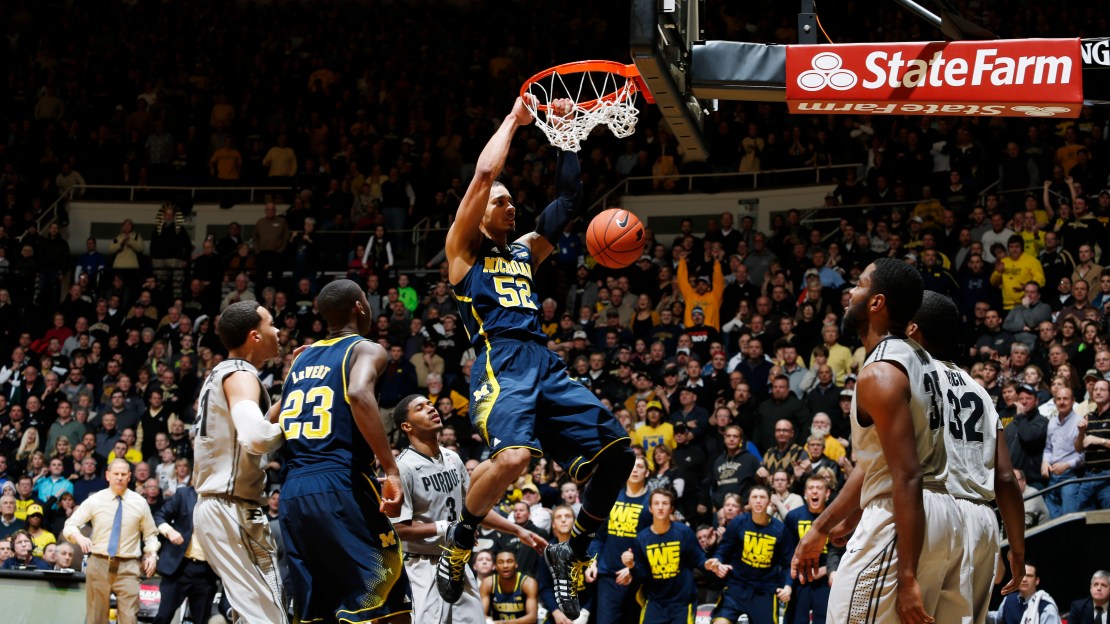 Someone get me a towel and two aspirins. Whew! That was something last night. Where to begin? How about West Lafayette? Good teams find ways to grind out road victories. And that?s exactly what Michigan did last night in overtime at Purdue, stealing a win to stay atop the Big Ten standings. Sorta makes you think that this is a team of destiny.

What makes the loss a killer for the Boilers is the fact Glenn ?Son of Big Dog? Robinson III scored the winning points. On a layup, no less. As the buzzer sounded. Crusher.

Michigan State?s Mark Dantonio got a raise. So did the Spartan assistants. But A.D. Mark Hollis says no ticket price increase will take place to help fund the new salaries. Bravo.

"It's (the new salary structure) something we will be able to sustain, and it goes back to our season ticket holders and donors driving that revenue to keep it up,? Hollis said at a school function. "We absolutely can sustain it."

The new deal for standout defensive coordinator Pat Narduzzi makes him the highest-paid assistant in the Big Ten with a salary of $904,583.

If there has been a rock-bottom to the Ohio State season, it was the home overtime loss to Penn State on Jan. 29. That was OSU?s fifth loss in six games. But since then, the Buckeyes have responded by winning six of seven games. OSU gets a chance for revenge at Penn State tonight. Hmmmm. Time to send a message, perhaps?

Illinois isn?t going to recede into the night. Nope, John Groce has his team fighting and play some of its best ball as the season is coming to an end.

Last night?s victory over surging Nebraska makes the Fighting Illini 3-2 in their last five games. This after an eight-game losing skid that could have sent Illinois into an irreversible spin. The last three games will be tough ones: at Michigan State; Michigan; at Iowa. Still, you have to like the direction of things in Chambama.

The Nebraska express has been halted at Illinois after a stunning five-game winning streak.

The Huskers, who had won seven of eight, still have hopes of making the NCAA tourney. Nebraska is now 8-7 in the Big Ten. And most bracket pundits think the Huskers need to go 10-8 in the Big Ten and win one game in the league tourney to punch a Big Dance ducat. Games remain vs. Northwestern; at Indiana; vs. Wisconsin. This is going to be interesting.

No doubt, joining the Big Ten figures to help Rutgers? bottom line as an athletic department. But until then, the sport department continues to get a massive subsidy from the school. A recent report says the subsidy grew to almost 70 percent to $47 million recently. Wow.

The story says that to fund a sports program that university officials say will generate close to $200 million of additional revenue in its first 12 years in the Big Ten, Rutgers subsidized the athletics department nearly a quarter of that amount last year, according to the institution?s financial report filed to the NCAA last month.

We all know the Big Ten needs to improve its talent in football. The gap in blue-chip studs between the league and the SEC seems to be large. The arrival of Urban Meyer was viewed as a good thing in this regard, as it was thought his recruiting prowess would push other Big Ten coaches to up their game. Well, how is it going? Here's an interesting take.

Minnesota?s NCAA tourney hopes are alive and kicking. But the Gophers may need to win two Big Ten tourney games if they finish 8-10 in league action. Minnesota is 7-9. But if Minnesota can get to 9-9 in the Big Ten, it obviously won?t have as much work to do. The Gophers have two games left: at Michigan and vs. Penn State. So, as you can see, getting to .500 in conference may be a daunting task.

Spring practice is just a week away at Ohio State. And the gang at Cleveland.com has a nice breakdown of the Buckeyes? 83-man roster.

My take: Illini are turning up the heat.

My take: John Beilein continues to amaze and impress.

My take: After last season, there are new standards and expectations.

My take: Kinda ironic, I guess.

So according to this BTN broadcast, John Mellencamp is going to be featured on The Journey on Saturday night at 8 pm. Huh. #iubb

This year the Wolverines got the friendly roll.

My take: I think it?s gonna be their year.

Loved Purdue's effort tonight, but you have to hope this one does not kill their spirit, especially going to Iowa and Wisconsin.

My take: But, hey, it?s something to build on.