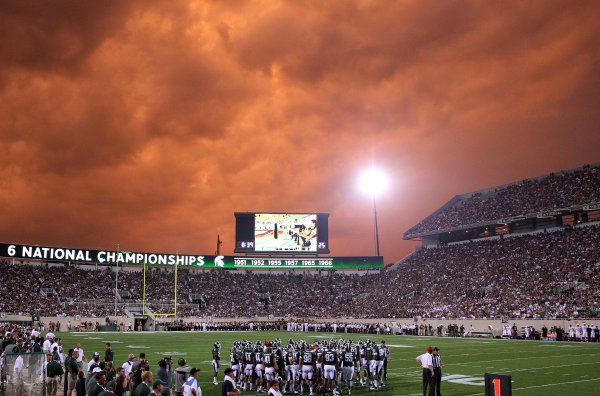 Talk of the Big Ten considering the possibility of playing some Friday night football games has created a buzz. I wrote a story about it earlier this week. In the two-and-a-half years I?ve been doing this job, I never have gotten as much email on a subject. It?s not even close. And, judging by the majority of your correspondence, the idea of Friday night football doesn?t have great appeal for fear of the high school game being impacted. Still opinions vary. Have a look.

[ MORE: Friday night football? There are 'lots of possibilities' ]

Wanna really think outside the box? Play games at 1 pm on Sunday. There are legions of college football fans like myself who do not care one iota about the NFL. – Colin Meyer

Traveling for fans would be much more difficult for a Friday night game.  And Friday nights are for high school football. I'm pretty traditional and think it needs to stay on Saturdays. – Bob

I am totally against the idea of the Big Ten playing football on Friday nights. As a high school football coach, Friday night is a sacred night set aside for high schools to compete in the sport of football. If Big Ten football is moved to Friday nights, how are we as coaches supposed to watch the games when our high school athletes are competing? Many parents, supporters, students and athletes also will not be watching as they would rather watch their athletes at a live high school football game. As a coach, I would miss the games I'd like to see on Saturday afternoons. And, it is tradition for college football to be played on Saturdays. – Dennis C. Andrewski

Why would you tinker with the success of Saturday football? The networks have already ruined the traditional 1 pm starting time. I fear that money keeps driving decisions. As a former Badger player, I loved the lead up to the game at 1 or 1:30. It allows fans to travel conveniently from the more distant cities in Wisconsin and also have time to socialize. You need to find a happy medium between revenue and what is good for the fan base. – Ed Krenzelok

I do not like the idea of Friday football. This would destroy the entire reason for football games, which is a gigantic tailgate party and "family" reunion during which sometime during the day or evening a football game occurs and we interrupt the reception to participate.  Friday night games do not support family tailgates. They would also be difficult to attend by the majority of alumni who work Fridays and travel to the games on Saturday morning. – Tom Kartachak

I'm not in favor of Friday night games, with the exception of Labor Day weekend.  However, I think your motivation was to find a way to generate more TV revenue.  One way the Big Ten could generate more revenue would be to tweak their bowl arrangements.  This year, there were three Big Ten games on concurrently on Jan 1. And, I think there were two others the same day. That meant the potential audience was split among three games.  If those games aren't concurrent, a lot of Big Ten fans will watch all the games.  Bigger audience equals higher ad rates, equals more money to the conference.  Is there a way to tweak the bowl arrangements or broadcast times to get a bigger audience and more money to the teams? – Mike McCarthy

I'm not in favor of the Big Ten competing with high school football games on Friday night. I AM, however, a huge proponent of getting rid of 11 AM games for us in the Central Time Zone. That really needs to change. Any chance of that happening? – Rob Marx

Here are folks who like the idea of Friday night football …

Love the idea of Friday night football for non-conference games. It would really be good exposure for the weaker teams in the league when they play the normal "cupcakes" that are on the schedule. What else is there to watch on Friday night? – Drew Freeman

Why would any football fan object to Friday night Big Ten football? It would provide an opportunity to see more televised games! Trying to see all of the Big Ten games on Saturday is impossible. In fact, why don't you have one of the games every night of the week? Hmmmm. There is nothing else worth watching on TV. – Robert Kuhl

I'm generally opposed to going up against high school football, and money shouldn't be the objective. However, seeing the SEC nab Friday nights would just grate against my nerves. If it has to be, then the B1G needs to be in the forefront. – RJ

Dear Tom and the BTN, UConn will gladly play every one of its games on Friday night if invited to the B1G. – Sincerely, A fan of New England's #1 Public University.

I will take Friday night games over these miserable 11 a.m. starts anytime. – Gerry