Rapheal Davis Q&A: 'We haven't focused on the details' 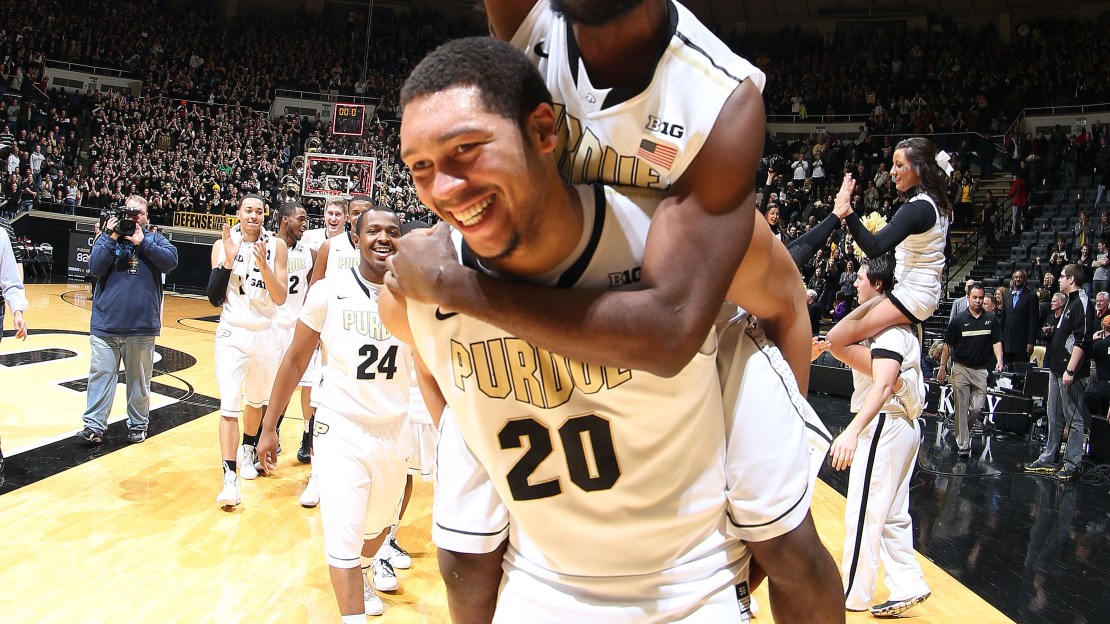 You don?t have to tell Purdue?s Rapheal Davis that this has been a disappointing season. He?s living it. And, it?s not much fun. But the sophomore guard is soldiering on as the losses mount and the hope dwindles in West Lafayette.

Davis and the Boilermakers will try to stop the bleeding when first-place Michigan comes to Mackey Arena on Wednesday night. Purdue is coming off one of its most numbing losses of the season, falling 76-57 at Nebraska in a game that wasn?t even that close. The loss-the most lopsided of the season for the Boilers–also may have been rock-bottom.

The Boilers are 2-7 in their last nine games, fighting for their postseason life on the heels of a disappointing 2012-13 season that saw the program play in the CBI en route to a 16-18 record. This season is in peril of finishing in similarly dubious fashion, as Purdue is 15-12 overall and 5-9 in the Big Ten with four games left-Michigan, at Iowa, at Wisconsin, vs. Northwestern.

The 6-5 Davis, who is averaging 5.1 points, 3.1 rebounds and 1.1 assists, knows the time is now for the Boilermakers. I caught up with Davis before practice to get his thoughts on a number of subjects.

Q: The Wolverines are rolling, in first place in the Big Ten as the program aims for its first outright league title since 1985-86. What are your impressions of Michigan?
A: They are good. They have a lot of skilled guys around the perimeter. They have come together. And they shoot the ball well. They work well together and understand their roles. Their big men do the dirty work down low. They just know how to play the game and are well coached.

Q: How frustrating has this season been?
A: It?s had its ups and downs. Not winning games is always frustrating. We are just trying to fight and to finish the season well and win a few more games.

Q: What is your role?
A: I have been trying to be a leader through my actions. Playing hard, rebounding, playing defense, doing the little things to help us win. Whatever Coach Painter asks me to do.

Q: What areas of your game do you want to improve at?
A: I need to get better at my ballhandling and with my jump shot, just my overall game. And I always want to work on my defense, being able to lock down the guy that I am guarding. I just want to improve my whole game.

Q: Has there been a high point to the season so far?
A: I think beating Boston College the way that we did. And beating Indiana at home not long ago was nice the way we did it. Winning at West Virginia was good. It?s hard to win there. Those were our good ones.

Q: Why do you think the team has struggled this season?
A: Not to use being young as a crutch, but our youth has hurt us at times. We have struggled to follow the details that help you win games. We haven?t focused in on the details. We often look at the big things. And I think that has hurt us.

Q: Who are some of the leaders on the team?
A: I would say our biggest leaders are Sterling Carter, Travis Carroll and Terone Johnson. The seniors. Their voices are big in the locker room, especially Travis?. He doesn?t play a lot. But he?s a senior captain who commands a lot of respect. When he says something, it pretty much goes.

Q: Are you guys holding out hope to get to the postseason?
A: We are planning on winning these last four games. And I think three of the games are against Top 25 teams. We get three of those, and I think we?ll be in good shape for a tournament. And if we make some noise in the Big Ten tournament, that will help, too.

Q: You were quoted thusly after the loss at Nebraska on Sunday: ?We don?t play hard. Sometimes it doesn?t look like we care a lot out there.? What did you mean?
A: I think some people took that quote out of context. Our effort wasn?t there vs. Nebraska. We can?t get beat by 19, 20 points and think that we played hard. After that Nebraska game, we didn?t play as hard as they did that night. Watching tape of the game, we made a lot of mental mistakes. You could see how focused they were.

Q: Was the loss at Nebraska a low point?
A: The Washington State game in November was to me. The way we lost and how we handled ourselves. We didn?t show our fight. We played well the game before vs. Oklahoma State. We expected to beat Washington State. And when we didn?t, it brought us down.