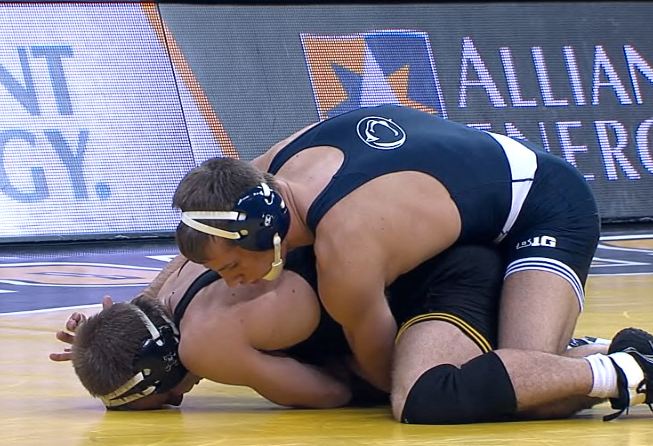 We decided to have a little fun providing a preview to this year's B1G Wrestling Championships on March 8-9 at Wisconsin. BTN wrestling analyst Jim Gibbons, an NCAA champion both as a wrestler and coach at Iowa State, will break down one weight class a day, and pick a winner, starting today through March 7. First up, the 165-pound weight class.

Picking winners is no easy feat with the competitiveness of most of these weight classes – can't just show up and expect to take home the hardware. Remember last year, we had a #1 seed place 7th, so not having the seeds is like flying without instruments but it makes it fun as well.

Pick: David Taylor, Penn State. This run of team titles by Penn State has yet to find an ending but there is no question about when and how it started. Since Taylor and teammate Ed Ruth hit the lineup as freshmen, the Lions have been a different program.

Taylor is the magic man; he puts up a lot of points and makes it look easy in the process. I've mentioned on several broadcasts his fast break offense and bonus points are like having an extra All-American in the lineup. Going out on a limb here, Taylor continues to get it done in the B1G and becomes a rare four-time champion en route to a Hodge Trophy performance.

Question: Is there someone in the rest of the field who will step up and get after Taylor? Iowa's Nick Moore is having a good season and will be seeded second and will likely be the other finalist. He was TF'd twice last year in a total of four minutes by the magic man, and this season Taylor won by a major – headed in the right direction.

Mr. Upside: Danny Zilverberg, Minnesota. Northwestern's Pierce Harger and Michigan's Dan Yates are  All-American candidates, but for my Mr. Upside, I'm going to call your attention to Zilverberg. He has eight teammates and two uncles who are All-Americans. I'm sure it's his goal to be one as well. In his senior season, I have to believe, he will give maximum effort this post season.