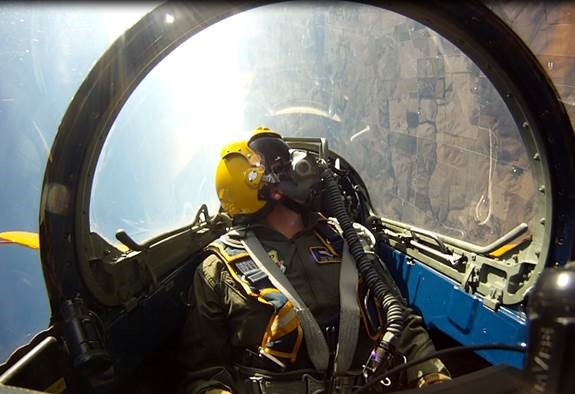 The Operator Performance Laboratory (OPL) at the University of Iowa does flight test research, pilot performance assessment and pilot training systems research and design. The OPL is directed by Tom Schnell, associate professor in Mechanical and industrial Engineering, who is a commercial pilot and a flight instructor.

LiveBIG sat down with Schnell to discuss the program.

So how did you go about buying the first equipment for the program?

I had to invent how to go about buying an airplane. It was clear to me as a private individual; I have bought airplanes before for myself. But this being a university, we had to deal with things like purchase orders. It was an experience, from the logistics of conducting the administrative side of it. I bought our first airplane in 2005 on the open market; it was being sold out of Omaha. You buy planes like you buy a house; you do an inspection and an analysis that carefully checks the quality of the airplane, then you make an offer. In 2008, a number of circumstances made us realize we needed something that could fly higher and pull more Gs. I was really impressed with the L29s and L39s, used some sources from online listings, and found one that actually looked exactly like what I wanted to buy, not just in terms of the mechanical capabiity but also the paint job.

When did you acquire your helicopter?

We bought the helicopter in 2012. I fly these helicopters for a museum in Texas, as well as a whole range of cold war airplanes, and they had four of them, and they didn't need four of them. I liked it a lot. It was easy to fly. So I made them an offer, and I brought it home.

Where do you keep your aircraft?

The infrastructure was at the airport which is owned by the city, and we lease the hanger. We outgrew the hanger pretty quickly and made a proposal to the city to have it extended. We were lucky to build an extension that doubled the size. We added some office space in the back.

What academic school are you associated with at Iowa?

We are situated in the College of Engineering, as part of the Center for Computer Aided Design, otherwise known as C-CAD. All of our students are engineers. It is not totally run by students. We have many complex systems where you need to have a lot of experienced personnel. The students get their hands on the equipment but they are being supervised and mentored by professional engineers who are employees of OPL.

The students go up in airplanes with you or another pilot in front and they sit in the back and work on simulators. Can they be credited with flight hours toward trying to become licensed as a pilot?

They can't log any of the time, but they learn a lot just by being there, being exposed to the different mechanical phenomenon that take place in the air. From that point of view it is a very unique experience. Who does OPL do research for?

A large part of it is federal; NASA, the Department of Defense, the U.S. Navy, we have had some Air Force contracts, either as a prime or a sub-contractor. Probably half of it is industrial money, some of which may be government flow-through. There is a company in Cedar Rapids named Rockwell Collins, which is an aerospace and defense contractor, and we are very closely aligned with their goals and their mission and we have a wonderful working relationship with many different people inside their different business units. Many times we lead a project and have Rockwell or Boeing as the sub-contractor and sometimes we are the sub-contractor on larger projects.

Do you go applying for these contracts, or do they find you?

It goes both ways. There is no free time. Every minute of every day, including Saturdays and Sundays, we go out and find projects. There have been a lot of proposals, but there is a lot of hard work to get a project up into the air.

What makes a successful project for your program?

What is the next step for the OPL program?

We don't want to grow uncontrollably, because it is difficult to do that right. We would like to add one more airplane that might add more capability in terms of testing, but by and large we are sustaining and gathering spending from where we are at. We have to struggle to get things funded, and it has been a struggle to remain the same in terms of our current size. But our eyes are always reaching out for more missions. We like to go places.