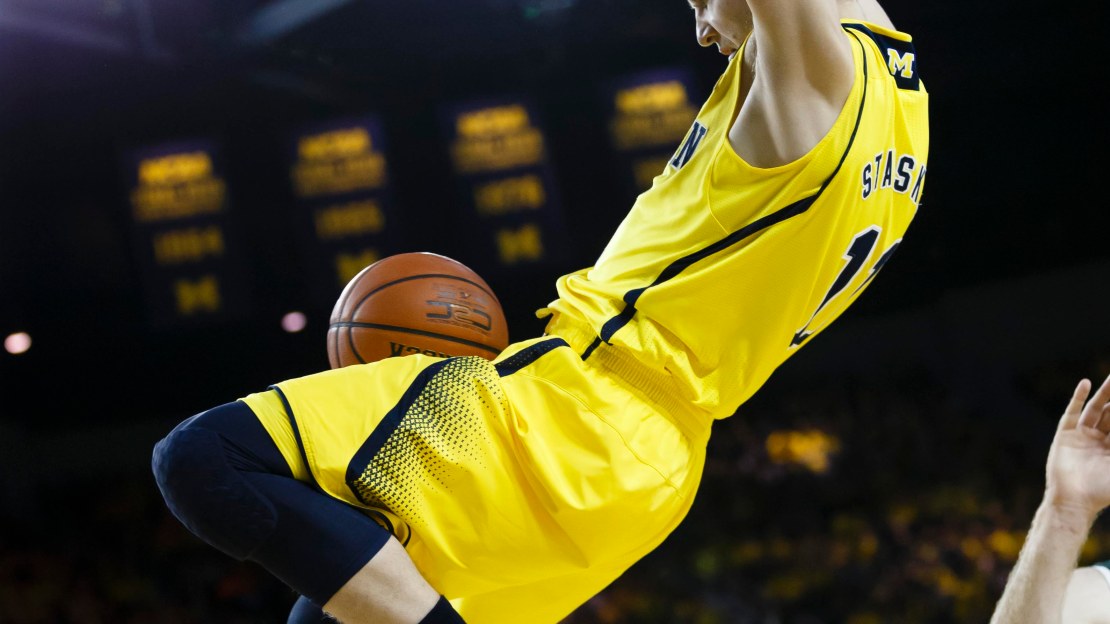 First, a recap of the weekend?s games. But jump to the end for our take on the Big Ten?s best defensive players so far this season. Or as I?ve come to know it-Our Annual Solicitation of Hate Mail from Buckeye Fans.

Let's start things off with Michigan, shall we? The Wolverines took firm control of the conference race by completing their sweep of the in-state rival Spartans. The Wolverine offense-and Nik Stauskas in particular-could not be stopped in the second half. What has to make this loss burn even more is just how well Michigan State played at the other end.

Stauskas finished with 25 points on just 13 shots, and made five in a row during a stretch in the second half when he just looked better than everyone else out there. The Canadian guard has his faults-he?s a poor defender, he?s inexplicably disappeared for a couple of costly games, and he?s probably a bit too cocky for most people?s tastes. But when he?s like he was in the second half against the Spartans-when he?s Full Stauskas-there might not be anyone better in college basketball.

INSTANT HIGHLIGHTS: Congrats to @umichbball on the gigantic rivalry win. We have all the top plays here. WATCH – http://t.co/yPSvfRvwRT

If there?s a consolation for Michigan State, it?s that this team was supposed to lose the game. That?s all well and good until you consider that they weren?t supposed to lose in East Lansing, but such scripting didn?t stop them from doing so. This team still isn?t healthy, with Brandon Dawson on the bench and Keith Appling generally looking listless-but like I said a couple weeks ago, I don?t know that we can ever expect this team to be healthy. A full-strength Michigan State team is probably an imaginary Michigan State team. Although rumor has it that Dawson will be back against Illinois, which appears to be the proverbial dog about to be kicked.

(One note on Appling-his offensive absence was understandable, and all things considered, he still acquitted himself reasonably well on that end of the floor. But why have Appling check Stauskas? Even if healthy, he?s probably the worst starting defender on the team. Mind you, that?s a high bar, as this is the Big Ten?s best defense we?re talking about here. But still, it was puzzling to me.)

Wisconsin rode a hot-shooting first half to take down the Hawkeyes in Iowa City. The Badgers had a surprisingly easy time against Iowa?s frontline, shooting 56 percent on two-pointers. Iowa was nearly as good, converting on 54 percent of its 2s. This game was definitely heavy on offense, with both squads going for over 1.1 points per possession.

Both teams still have an outside shot at getting a share of the Big Ten title, but the next couple of weeks are going to have far-reaching implications. As a 2 or 3-seed, I like both of these teams? chances of going deep into the Tournament. As a 4 or 5-seed, though, and that forecast becomes a fair bit cloudier. Wisconsin has a lot of great wins (those Virginia and Florida wins look fantastic right now), but Iowa does not have any bad losses. With a strong finish, both teams could find their way onto the 2 or 3 line, but a sluggish limp to the finish line could doom any dreams of making a Final Four run.

Another race to keep an eye on is Conference Player of the Year. In my view, both Roy Devyn Marble (who scored 21 points and dished 11 assists against 2 turnovers on Saturday) and Frank Kaminsky (21 points and 7 rebounds) are near the top of that list.

INSTANT HIGHLIGHTS: What a win by @BadgerMBB! See all the top plays from the road win at Iowa. WATCH – http://t.co/z4IvkglviA

Nebraska stomped all over Purdue in a 19-point win in Lincoln, and the Cornhuskers are firmly In The Conversation. With three games against the likes of Illinois, Northwestern, and Indiana, you have to think that 10 wins seems likely, and 11 seems quite reasonable. Tim Miles? team then finishes off the season at home against Wisconsin, and with the way the Huskers have played at Pinnacle Bank Arena (15-1, only loss against Michigan), 12 wins is very plausible.

I don?t know if Nebraska will make it into the Field of 68. In all likelihood, it?s going to come down to how some of the mid-major conference tournaments go and how the Huskers do in the Big Ten Tournament. But right now, Nebraska looks like a top-50 team, one that does not lose much this offseason. Believe it or not, Nebraska might be a top-25 team next year.

Terran Petteway continued his push for Big Ten Player of the Year, dropping 29 points on 19 shots, including this alley-oop.

INSTANT HIGHLIGHT: This time, it's Terran Petteway on the @HuskerHoops alley-oop. WATCH – http://t.co/sVphQygwpl

On Saturday, a pair of games mostly had the effect of solidifying the NIT path for a couple of teams. For Indiana, that?s a good thing at this point in the season, as the Hoosiers? at-large hopes have long since been dashed. But a road win is a road win, and the NIT could prove to be valuable development time for IU?s young roster. Northwestern had a nice run for a while there, but it looks like this team has simply run out of gas. With JerShon Cobb now lost for the season, winning another game might be an uphill battle for the Wildcats.

Minnesota meanwhile blew a great chance for an upset when it lost in Columbus. After going into halftime facing a 10-point deficit, the Buckeyes blasted the Gophers right out of the gate, and the game was pretty much over ten minutes later. At one point this looked like a pretty promising season for Minnesota, but the team has largely fell in line with our preseason projections. And once again, the culprit is defense (the Gophers rank 10th in Big Ten play in defensive efficiency). Sam Thompson led the way for Ohio State (19 points, 12 shots).

Now, to defense. This is by far the most controversial post of the year, with most of the feedback being of the ?I can?t believe you underrate eye_test_warrior? variety. So once again, I?ll lead off with the caveats:

OK, with that likely-pointless exercise out of the way, here are your conference leaders in Stops per 100 possessions (this time, the formula is more comprehensive, and accounts for fouls).

The name at the top isn?t that crazy, as Vonleh has been a powerful rebounding presence all season. He also has 22 blocks and 8 steals, which isn?t bad for a big man. And frankly, the other names on this last don?t surprise me all that much, with one notable exception-Aaron White. This guy was a big defensive liability last year, and now he?s one of the conference?s best defenders? What happened?

Well, in a word, rebounding. White?s defensive rebounding percentage jumped by 50 percent from last season, and he also has sliced his foul rate to virtually nothing (in 398 minutes of Big Ten basketball, White has committed a foul exactly 12 times).

OK, but what about the guards? Who are the best defenders in the Big Ten, 6-6 and under category (apologies to Brandon Dawson, who is actually a very good defender, even by taller standards. But his lack of playing time this year makes this cutoff a bit easier to make. I should also mention that I imposed a cutoff of having played 40 percent of the available minutes in conference play):

What most of these guys have in common is that they are exceptional rebounders for their size, the one exception being Craft. Craft is a reasonable rebounder, but obviously his talents lie with pressuring the basketball.

The large takeaway from this is that Noah Vonleh is the Big Ten?s best defensive player. I don?t think that?s a very controversial statement, given his exceptional rebounding and on-ball defense. Also, the case for Aaron White belonging on the All-Big Ten First Team just got a lot stronger.