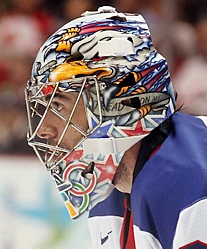 Four years ago, Ryan Miller was named the Most Outstanding Player as the United States men?s hockey team won the silver medal. This weekend, the US will be playing for the bronze and "home" will have their collective eyes on the ice in Sochi.

Home is always on Miller?s mind. A proud product of Michigan State, Miller is never bashful about sharing his Spartan pride.

Miller is also aware of the needs of many in the community back home in East Lansing, Mich. As the starting goaltender for the Buffalo Sabres, he has used his platform as a professional athlete to help those suffering the ill-effects and life-altering consequences of cancer, especially all forms of childhood leukemia, through his non-profit organization: The Steadfast Foundation.

Less than one week after the gold medal game in Sochi, Miller?s family and The Steadfast Foundation are hosting a unique event for any hockey fan in Michigan with the hope of raising money to help a few great organizations.

On Friday, Feb. 28, Michigan State hockey alumni will play a game at Munn Ice Arena against Detroit Red Wing Alumni. The game will feature former greats from both organizations, including current Spartans coach Tom Anastos, Brian Smolinski, Brad Fast, Kip Miller, Jimmy Carson and Joe Kocur. Fans will also be able to get memorabilia autographed by the players during the game.

?I am thrilled to organize this event that benefits three incredible charities. The Steadfast Foundation, Wounded Warrior Project, and United Way 2-1-1 have been doing wonderful things in our community for years, and we look to keep that going,? said Kevin Miller, a former Red Wings and Michigan State player.

The game will raise money to benefit The Steadfast Foundation, 2-1-1 United, and The Wounded Warrior Project. Tickets are only $6 for adults and $3 for kids (under 10 are free)!

For more information about the game and purchasing tickets, visit: http://spartanwingsgame.com/