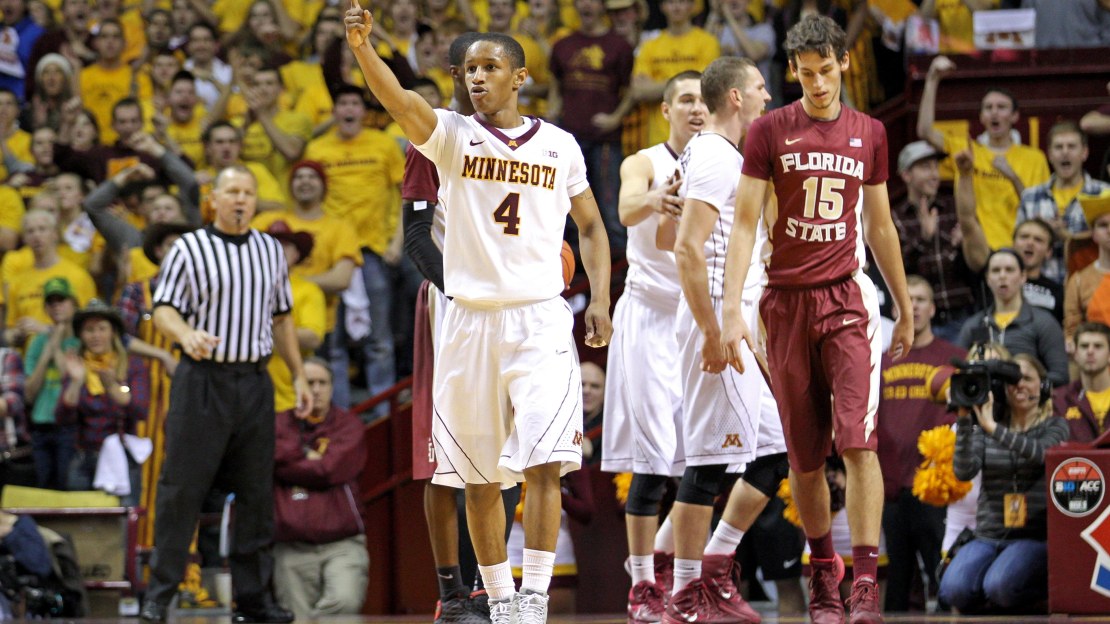 The Big Ten features many dynamic newcomers who have had a profound impact on the conference this season. Indiana?s Noah Vonleh, Nebraska?s Terran Petteway and Michigan?s Derrick Walton, Jr., among others. Minnesota?s DeAndre Mathieu also belongs in the conversation.

The 5-9 junior is averaging 11.7 points, 2.8 rebounds and 4.4 assists for a 17-9 Golden Gophers squad that?s making a push for an NCAA bid (see his full stats here). Minnesota is 6-7 in the Big Ten as it preps to play host to Illinois on Wednesday as the second game of the BTN Super Wednesday doubleheader.

The Gophers have won two of their last three games and probably need to finish 9-9 in league action to earn a Big Dance ticket for a second season in a row.

Mathieu is a cat-quick point man who pushes the pace for an up-tempo Minnesota attack under first-year head coach Richard Pitino. The Gophers plays host to Illinois on Wednesday. They finish at Ohio State; vs. Iowa; at Michigan; vs. Penn State. I caught up Mathieu as he prepped for the Fighting Illini.

Q: Does Minnesota have what it takes to make the NCAA tourney?
A: Coach (Richard Pitino) tells us all the time if we finish strong and don?t worry about the tourney that we?ll make it. Just play to our standards and play Minnesota basketball and we?ll be fine.

Q: How did you end up choosing Minnesota?
A: I liked the up-tempo style that Coach told me we were going to play. And he said he would have confidence in me and that I would be his point guard. I felt comfortable. And then I visited the school and met the guys, and it sealed the deal.

Q: How would you describe your style of play?
A: I?m an up-tempo point guard who likes to excel in the open court and try to get other guys involved first; a pass-first point guard who scores a bit.

Q: What?s your relationship with Andre Hollins like?
A: Dre has really helped me out a lot, getting accustomed to the Big Ten. We room together on the road and talk about a lot of stuff that goes on in games. He keeps me in engaged and keeps me going. He does a lot for me. If I?m having a rough stuff, he tells me that it happens to everyone. He tells me I?ll be fine and to keep going. And in games, he?s a really good scorer, which makes it easy for me.

Q: You are 5-9. Growing up, did you have any ?little guy? players you looked up to?
A: Allen Iverson has always been my favorite player. He plays with so much heart. He was usually the smallest guy on the court. It didn?t matter. He played with such heart. I think he was one of the best to ever play the game.

Q: What is your best move? Do you have a killer cross-over dribble like A.I.?
A: I like the in-and-out cross-over. Or the right-to-left cross-over. Those are my favorites.

Q: How is a kid from Tennessee who played junior-college ball in Arizona dealing with Minnesota winters?
A: It?s really tough right now walking through the snow. I try to stay in as much as possible. Go to class, bundle up, come home, turn the heat up. I don?t know how people do it all the time. It?s ridiculously cold out all of the time.

Q: Tennessee didn?t recruit you?
A: They came to one game, but I didn?t hear anything after that.

Q: You played at Morehead State as a freshman. Why did you leave for the JC?
A: I was a walk-on at Morehead. And the coaches said if I ranked among the top eight players on the team in minutes that I would get a scholarship. I started some games but missed the top eight by a few minutes. Even though I just missed, the coach didn?t feel that I deserved a scholarship. I didn?t want my mom to keep paying for my education. So I thought going to a JC was my best option.

Q: What?s it like to play in Williams Arena?
A: I think we have the best fans in college basketball. They are so passionate about their Gophers. It?s so fun to play in front of them. Win, lose or draw, they always are there. They always are excited to watch their Gophers play, and I love it.

Q: How would you describe Richard Pitino?s style?
A: It?s an up-tempo style. He doesn?t mind us taking shots, as long as they are good shots. He wants you to defend and play hard. He talks loose balls and hustle stats. He just cares about us being the hardest-playing team in the country. His passion and emotion really get you going as a player. The style of play matches his fiery personality.

Q: Did you ever doubt you could play in the Big Ten?
A: If I said ?No,? I?d be telling stories. I always thought I could play at this level but wasn?t sure if I would get the opportunity. Once I got to Morehead, I thought it would be a stretch to think I?d be playing at this level. I?m happy to be here and think I worked hard to get here.