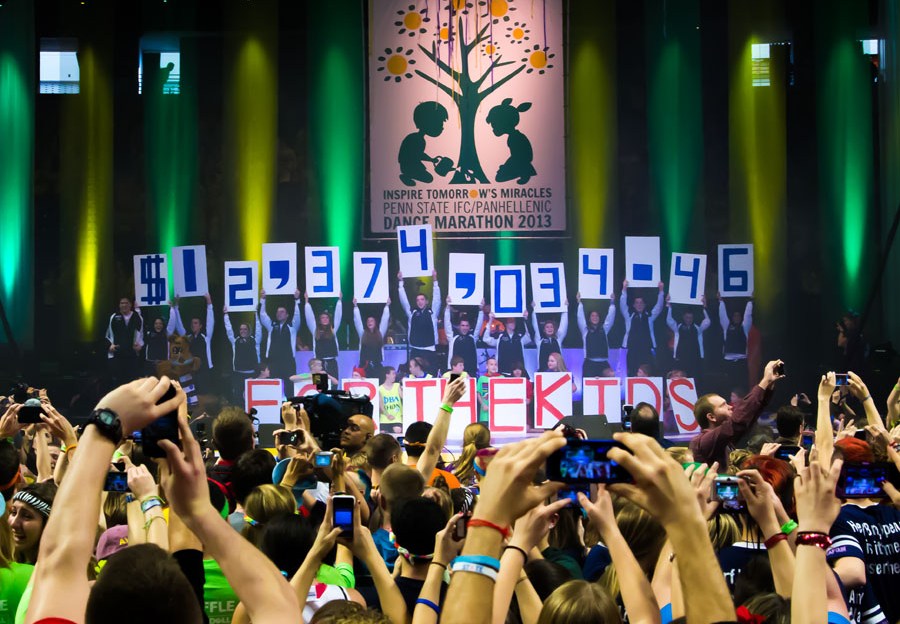 For the past 37 years, Penn State University?s student body have pulled together the largest student-run fundraising effort, called THON.  Many universities have dance marathons to support charities, but Penn State students blow it out at a scale that is unmatched. The student body has successfully raised more than $100 million for pediatric cancer patients and research. This year?s effort is expected to clear $12 million in donations.

An operation this large needs a dedicated team of people to manage the 15,000 participants.  It?s a yearlong effort building to the 46-hour non-stop event February 21st through the 23rd.  BTN LiveBIG wanted to see what it takes to run such a mammoth event. So we checked in with Penn State University Senior Ryan Patrick, THON 2014?s Executive Director.

Patrick, who signs his emails with ?For the Kids? so he keeps everyone?s focus on the purpose of THON, answered some questions for LiveBIG.

Why did you get involved in THON?

I decided to become involved with THON because of two things.  First, I grew up in a family that stressed giving of yourself to others, and attended a high school where service was a big part of the student experience.  While in high school, I was heavily involved in Habitat for Humanity as well as the school's student service corps.

I helped run a program called Homeless Outreach, in which we would go to Philadelphia every week and deliver food and clothing to the city's homeless population.  These experiences all taught me that not only is service to others important, but it was a fun and a great way to surround myself with like-minded people.

The second reason why I became involved with THON is much more personal.  While I have not had many first-hand encounters with pediatric cancer, I still felt connected to the children and their families through some of my personal experiences.  When I was younger, I was diagnosed with Type 1 Diabetes and I distinctly remember the feelings of fear and uncertainty toward the future.

I was taken from my normal life and thrust into a hospital room without any idea of what the next day would look like.  While my experience certainly does not compare directly with that of a pediatric cancer patient, I found a connection in this shared fear of tomorrow.

What made you want to be the Executive Director?

For me, THON was always a magical experience.  When I attended my first THON Weekend as a freshman at Penn State, I was amazed by what I saw.  Never before in my life had I been surrounded by so many people . . . passionate and motivated by one thing: to cure pediatric cancer.  The energy in the Bryce Jordan Center was infectious, and I knew that I wanted to make THON a big part of my Penn State experience.

I was in charge of my fraternity's fundraising efforts for THON during my sophomore year, then was a Captain on the Merchandise Committee the next year.  Going into my senior year, I knew that I wanted to do much more for THON and decided to apply to be the Merchandise Director.

This was an amazing experience last year, but I knew that I was not yet done and wanted to put even more of myself into THON.  I chose to then apply for the Executive Director position and was ecstatic when I was chosen, since that meant I could have the opportunity to lead THON into its next stage.

What are your goals for this year's THON?

This year, I am hoping for two main things.  First, it is my hope that we are able to raise as much money as possible so that we can continue to support the children and families undergoing pediatric cancer treatment at Penn State Hershey Children's Hospital, as well as the numerous research programs that are being conducted.  I am also looking forward to providing the kids with a weekend in which they don't have to worry about cancer, and only have to focus on having as much fun as possible in the Bryce Jordan Center.

I think this escape from the harsh realities of pediatric cancer is the most important thing that THON provides, and I look forward to THON 2014 being no different.

You set a goal for yourself of making THON more nationally recognized.  How did you do with that goal?

This question is really interesting.  When I set this goal last spring, I thought that I would measure success by how many new media outlets we would have tapped into.  However, as the year has passed I realized that this goal is not something that can be truly attained in a single year.

While we are slowly but surely expanding THON's story into more and more markets, I believe that our biggest success in terms of making THON more nationally recognized is related to how we have demonstrated that while THON is a Penn State-organized philanthropy, its work truly benefits children everywhere. We have begun to make sure our message focuses on the research programs that the Four Diamonds Fund supports.

The majority of the money that THON raises each year goes into these research programs, and while it is undoubtedly important that we are supporting the families that are treated at Penn State Hershey Children's Hospital, we also needed to ensure that people understand this research has the ability to make a positive on any child that is affected by pediatric cancer anywhere in the world.  I think that the Public Relations Committee did a great job of that this year, and because of that we have set up a strong foundation on which next year's THON efforts can continue to build so that one day our message is visible on the national scale.

What's been the hardest part of directing such a massive event?

With something as large and as complex as THON, there are a myriad of tiny things that must happen each year and it can be difficult to keep track of them all.  This has been a great way for me to learn how to become even more organized that I was before, but at the same time I am very lucky to be working with a very talented group of 14 individuals that make up my Executive Committee.

What's been the most rewarding part of the job?

Easily the most rewarding part of being the Executive Director for THON is knowing that with every single cent raised and every child's smile, we are making a difference and leaving a positive mark on the world.  In this position, I am fortunate to meet many of the children and their families affected by pediatric cancer, and seeing the pure joy and excitement on their faces during THON Weekend and all other THON events throughout the year is one of the most rewarding things I've experienced in my life.

What's next for you?

After I graduate, I will start my career by working for Deloitte Consulting in Philadelphia as a Strategy & Operations Business Analyst.

How do you think your work will help you in your career path?

THON has taught me so much, not only about leadership but also about how important it is to truly do something that makes you happy.  In the workforce and especially consulting, I think that "soft skills" are extremely important.  As the Executive Director, I have had the opportunity to really hone and refine my interpersonal and communication skills, as I work with different groups throughout Penn State as well as several external parties, and I have learned just how important it is to learn how to effectively communicate with people.

If you want to follow THON, February 21-23, check out thon.org/webcast. There will be a live stream of everything happening throughout the entire weekend. LiveBIG will be providing updates throughout the event weekend. For more information or to find ways to contribute, visit www.thon.org.