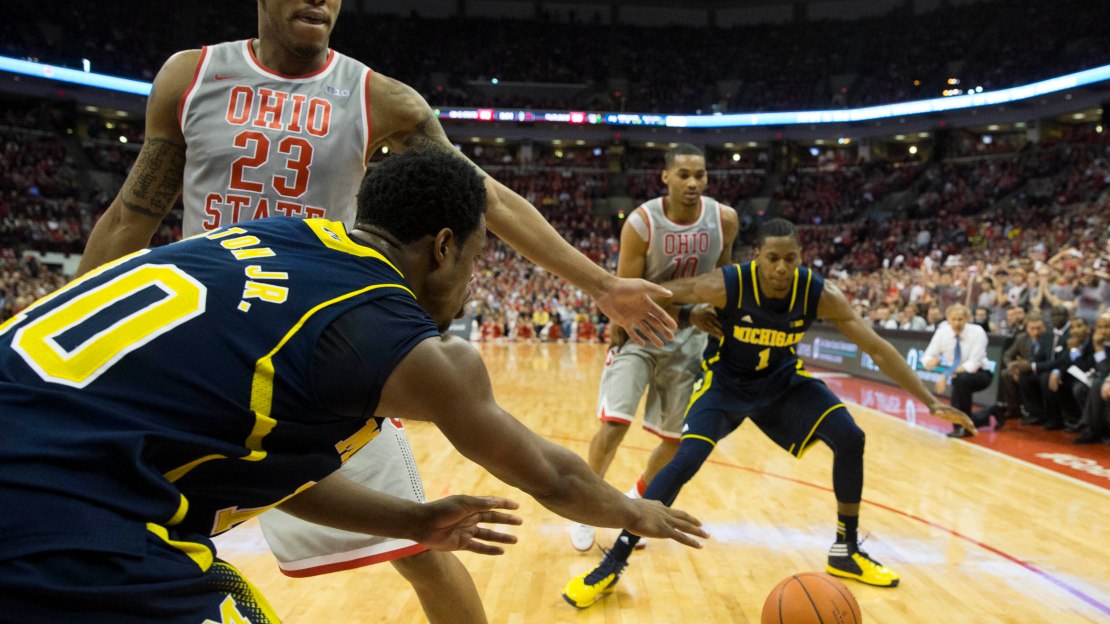 Big win for Michigan last night, wading into Ohio State and prevailing. This was a Wolverines team that was slumping, having lost two of three games. And the Buckeyes were rolling, ripping off three victories in a row. No matter, Michigan won to stay atop the Big Ten. Has this team had a more impressive win all season? Nope.

In case you are wondering, that?s three road wins over Top 25 teams for Michigan, which outscored the Buckeyes, 33-17 over the last 12 minutes last night. Impressive, huh? Yep.

We also may have seen the birth of the Wolverines? next great point guard in Derrick Walton, Jr., who notched a double-double. This wasn't a points and assists double-double, either, as Walton did it with points and rebounds. Brandan Quinn of Mlive.com offers video analysis of Michigan?s big win.

Is a reason why Ohio State seemingly can?t get over the hump this season because of a lack of NBA talent? Doug Lesmerises of Cleveland.com thinks Michigan, Michigan State, Indiana and Wisconsin all have more NBA talent than Ohio State. And, he?s correct.

Yes, Michigan State?s Gary Harris is struggling. But he is looking forward, not back. He?s coming off a 3-of-20 shooting effort in a loss at Wisconsin and is averaging just 12.3 points in the last four games while hitting only 7-of-30 shots from three-point land. Still, Harris is a Big Ten Player of the Year candidate. He?s had that kind of season. But he?ll need to pick up the pace if he wants to lead MSU to the Big Ten title.

Michigan?s win last night at OSU may have put it in the driver?s seat in the conference chase. Still, the Big Ten crown may come down to Feb. 23, when Michigan State visits Michigan. And, that just might be when the Spartans-who figure to be without Keith Appling (wrist) this week–finally have a full complement of players after seemingly having at least one key player out most of the season.

Speaking of league player of the year contenders, how about Iowa?s Roy Devyn Marble? He is the only Big Ten player who has scored in double-figures in every conference game this season.

Can Nebraska make the postseason? The push begins now.

Why the optimism? Here is why: Nebraska (12-10 overall; 4-6 Big Ten) plays five of its last eight regular-season games at home - where the Cornhuskers are 10-1 - and only two of its remaining foes have winning records in league action. Nebraska hasn?t won more than eight conference games since 1998-99. And it hasn?t been to the postseason since making the NIT three seasons ago. This is gonna be interesting.

Nice story on the Pitinos here. Father Rick?s advice to son Richard: Stay at Minnesota. In fact, Papa Pitino says "It's a perfect place for (Richard) to become something special like Bo Ryan." Oh, and if you were wondering why Pitino?s youngest son wore that chicken costume at a recent Gophers game, it?s explained in that link, too.

Bet you didn?t know that Illinois coach John Groce likes 80s music. Or that his fav tune from that era is ?Come on Eileen? by Dexys Midnight Runners, their one hit. What does this have to do with anything? Well, Groce doesn?t want freshmen Kendrick Nunn and Malcolm Hill to be one-hit wonders after their breakouts at Penn State on Sunday. Pretty cute, huh?

Tim Miles, on his team so far exceeding expectations after being picked to finish last in B1G: ?We could still get there.? Reporters laughed

My take: It?s true. I did the calculations.

Six Big Ten losses for #Buckeyes most since they were 10-8 and tied for fourth in 2009. #buckbk

My take: Who saw this coming? I didn?t.

Elite prep FB players want to play in NFL. Any interest shown by NFL in UW's Gary Andersen is a plus, not minus. He can help get them there

My take: My thoughts exactly.

My take: Lots of poor shots.

Don't bet against Beilejn coming off a loss. Guy is pulling off a helluva coaching job this year.

My take: Big Ten Coach of the Year? Maybe?

My take: Hard to do.

Too bad we'll not see Pitino vs. Pitino at the Barn, Rick Pitino said. Unless the ACC-Big Ten Challenge schedules it. Make it happen people.

My take: I hope it happens.

James Franklin's staff stressed owning the area within 6 hrs from State College. #PSU has 46 of 95 players from last 5 classes in that area.

My take: Not bad. I think this is a reachable goal.