Aaron White Q&A: It's all about energy for Hawkeyes 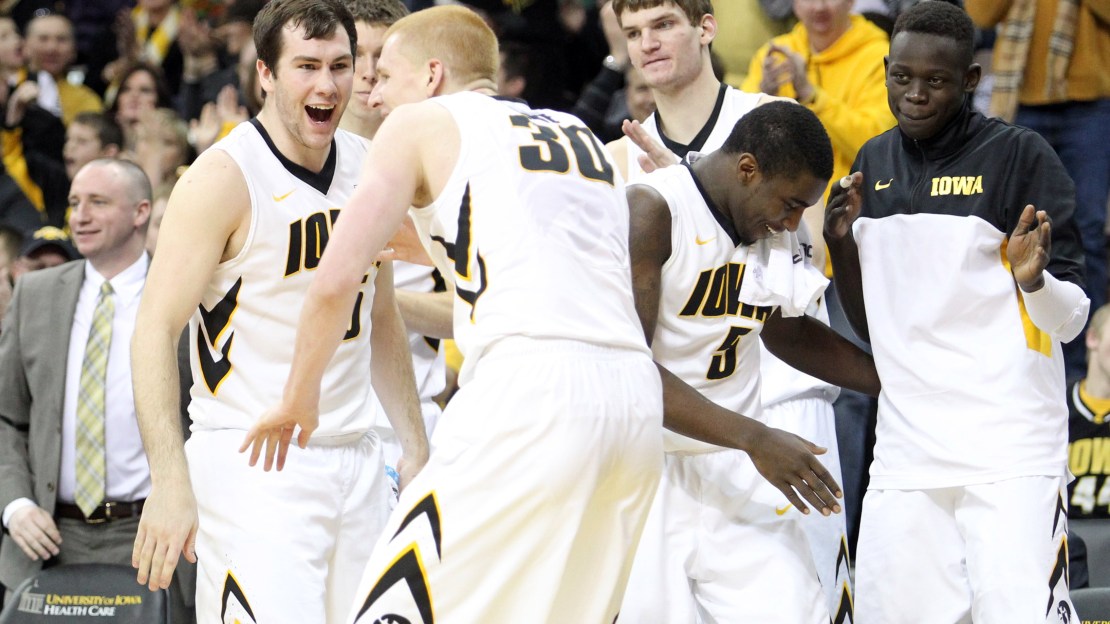 In many ways, Aaron White is the epitome of Iowa basketball, a try-hard guy who continues to emerge as one of the Big Ten?s most versatile and indispensable players largely because of hard work. Bottom line: White is a player any coach would love to have. His ability to impact the game on myriad levels is unique.

It didn?t take White long to make an impact upon arriving in Iowa City in 2011-12, averaging 11.1 points and 5.7 rebounds with 14 starts. He moved into the starting lineup as a sophomore last season, upping his averages to 12.8 points and 6.2 rebounds.

The 6-9, 220-pound junior from Strongsville, Ohio, is taking his game to another level this season, averaging 13.2 points, 6.5 rebounds and 2.0 assists for a Hawkeyes squad that?s aiming for the program?s first Big Ten regular-season crown since 1978-79.

Iowa enters this Saturday?s game at Penn State with an 18-6 overall mark and a 7-4 Big Ten record, good for third place behind Michigan (10-2) and Michigan State (9-2). The Hawkeyes are coming off their most impressive win of the season, an 85-67 demolition of Michigan.

I caught up with White to get his thoughts on a variety of topics as the season hits its home stretch.

Q: Has the season gone as you?d expected?
A: I think so. We came into this season with more expectations than last year. And I think we have done a good job handling them. Every season will have ups and downs. But we have taken care of business. We are just trying to get better every day.

Q: What have you improved at?
A: I think I gained a lot of confidence going overseas last summer and playing for the World University Games. I have tried to take that into our season and be more of a leader. I had to prove myself my first two years. Now, I?m trying to take that next step.

Q: Did Ohio State recruit you or offer you a scholarship?
A: No.

Q: Did any other Big Ten offer you a scholarship?
A: No.

Q: Can you guys still win the Big Ten?
A: You just have to take it game by game. With the way the league is going, there?s never a guaranteed win. If we take care of business, you never know what will happen.

Q: Coach Fran McCaffery is, shall we say, intense. Is that something you guys feed off of?
A: Everyone knows he is intense by watching him coach on the sidelines. I know where that passion is coming from. He?s fighting for us when he goes after a ref. He just expects more out of us. I love it. And I love seeing it. It gets me fired up on the sideline. He?s not trying to make a spectacle of himself or show us up. He?s trying to get the best out of us and fight for us.

Q: What was your takeaway from the Marcus Smart incident?
A: You don?t see much stuff like that. You can?t really speculate on what the guy said. I think social media has a part in it. A lot of people say whatever they want to the athletes and try to get away with it. Going into the crowd was a big mistake on his part. He lost his cool and you can?t do that. At the same time, fans need to understand that we are human beings. You can?t just say whatever you want. But he has to have more composure to not react like that. There are two sides to every story.

Q: Who is the leader of your team?
A: I?d say it?s Devyn (Marble) and myself. As far as vocally, I?d say it?s myself. Dev is playing great right now, scoring the basketball. But when it comes down to getting after someone in practice and holding the guys accountable, I think I am more of the voice. We both have a hand in steering our team in the right direction.

Q: Who is the most underrated player on the team?
A: You know who that is ? Gabe Olaseni. All of us in the program saw his development coming. There?s still more there. He has a ton of talent and a great work ethic. The more confidence he gets, the more he is impacting games. So far, he has had a great year and keeps getting better for us.

Q: What would it mean to win Iowa?s first regular-season Big Ten since 1978-79?
A: It would mean a ton. We have a passionate fan base that would be super excited. That?s the goal. We are close to the top. There are games left. We just have to keep working toward that.