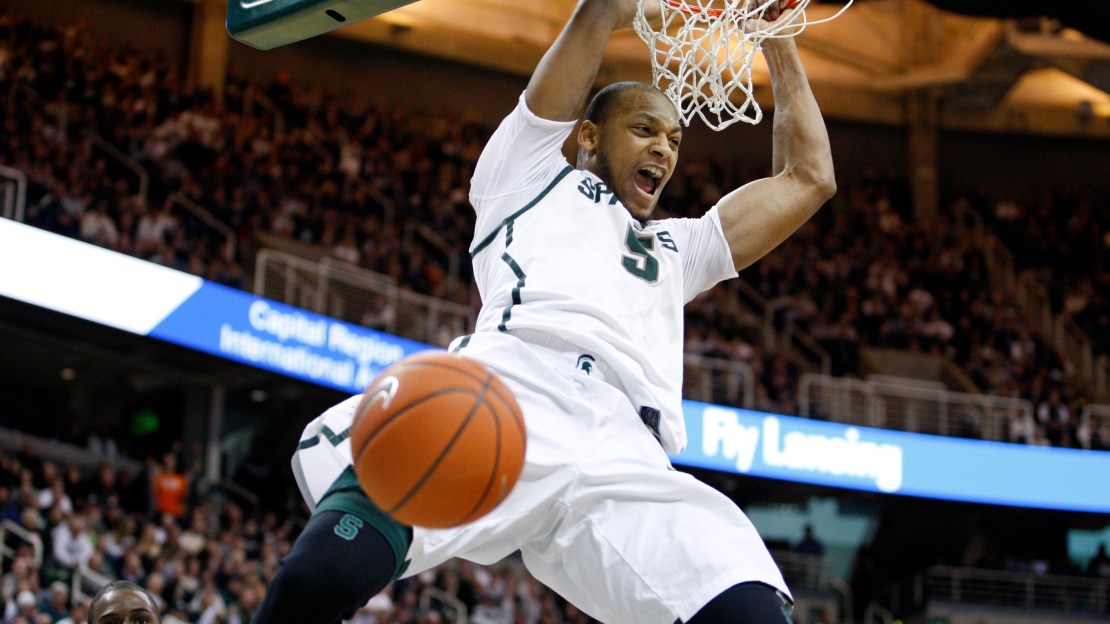 Michigan State welcomed back Adreian Payne in a blowout of Penn State. The big man played very well in 18 minutes off the bench, and the Spartans performed much better than the final margin suggests. Penn State made a big run in garbage time to turn a 25-point deficit into a 15-point loss, but it was done entirely on a lineup that included guys like Colby Wollenman, Keenan Wetzel, and Dan Chapman.

Before garbage time, Michigan State dominated at both ends.

If not for the late flourish, that would have been the second-lowest output of the season for Penn State, and only two teams have posted higher efficiencies against the Nittany Lions. This was a dominating performance in all aspects, and it came without point guard Keith Appling. Sure, it was just a tuneup game against Penn State, but these Spartans have kept on rolling despite all the injuries.

Denzel Valentine was productive all over the court with 11 points, 11 rebounds, six assists, and four steals. Kenny Kaminski scored 19 points on just nine shots, and Travis Trice dropped seven dimes without a single turnover. This team will be terrifying if it can finally get everyone healthy.

Purdue won a triple overtime game against Minnesota that neither team really deserved to win. The Boilers had multiple opportunities to put the game away at the foul line, but they failed over and over again. The Gophers couldn't get enough going on offense to take advantage, and Purdue took the victory almost by default.

The Boilers got a loud statline from A.J. Hammons (20 points, 14 rebounds, six blocks), but it actually could have been a better performance from the big man. It took Hammons 19 shots to score those 20 points, and he committed five turnovers. On top of that, Minnesota's backup big man, Maurice Walker, put up 17 points in one of the better games of his career.

The Gophers have now lost three consecutive games to inferior competition by a combined eight points. This unfortunate stretch could very well come back to haunt Minnesota on Selection Sunday, as the team is now projected by KenPom to finish 8-10 in conference play. The Gophers have a solid trio of quality wins (Florida State, Ohio State, Wisconsin), but the value is lessened a bit by the fact that all three came at home. There's still time for Richard Pitino to right the ship, but it needs to happen quickly.

Michigan absolutely pummeled a Nebraska team that came in on a hot streak. This one was Beilein-ball to the extreme, as the Wolverines dedicated 60 percent of their shots to threes. When you bomb away like that and make them at a 42 percent clip, there's not much else that matters. When it is paired with very solid defense (Nebraska scored only 0.79 points per trip), you get a huge blowout.

Michigan now faces a brutal stretch that will test their title worthiness, starting with a trip to Iowa this Saturday. That is followed by a visit to Ohio State and home games against Wisconsin and Michigan State. If the Wolverines can manage to win three of four, they should be in great position to win this conference. That's much easier said than done.

This weekend finds both conference title contenders on the road, as Michigan visits Iowa and Michigan State visits Wisconsin. Both games figure to be stiff challenges, and the team that emerges with a road win will take the pole position in the title race.