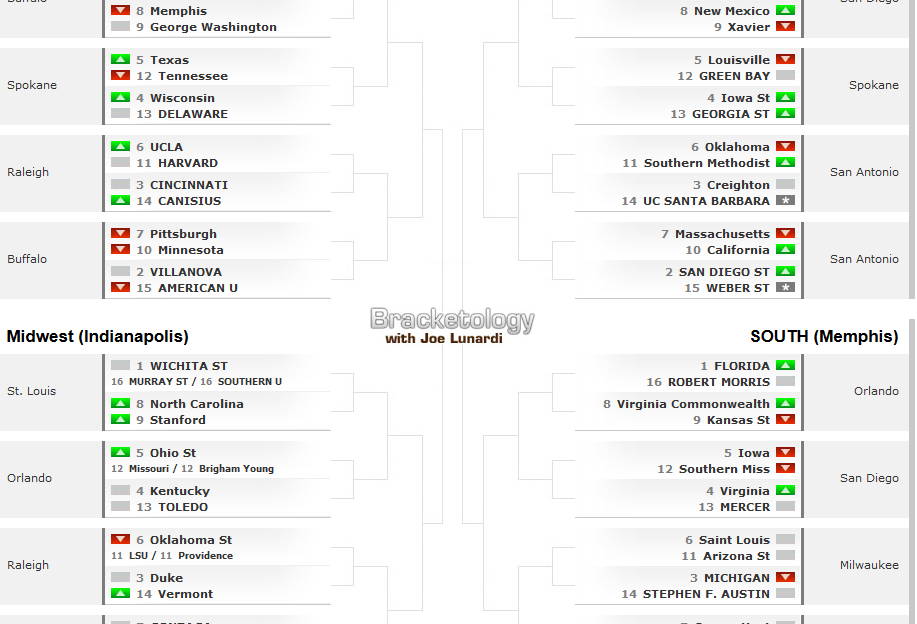 With so many Big Ten programs constantly beating up on each other this season, how many teams from the conference will receive bids in this year's NCAA Tournament? That has been one of the most popular questions among Big Ten hoops fans this season.

ESPN Bracketology expert Joe Lunardi projects the Big Ten to get six teams into the dance, according to his latest NCAA tournament projections.

Here is a breakdown of the Big Ten teams Lundari lists in his bracket, as well as where they are seeded and what region they would be playing in.

My take: I agree with Lundari for the most part, outside of Minnesota. After their loss to Purdue last night, the Gophers stand at 15-8 overall and 4-6 in Big Ten play. Likewise, Indiana is sitting at 14-8 and 4-5 in conference action. The two teams play each other on Saturday. If Minnesota is going to make the tournament, that seems like a must-win game for them. I say that because when looking at both Indiana and Minnesota's remaining schedules, the Hoosiers appear to have an easier road, playing Penn State, Purdue and Nebraska in three of their final nine games. On the other hand, Penn State and Illinois are the only two teams Minnesota plays with sub .500 conference records. The Gophers also have to play at Wisconsin, Ohio State and Michigan, as well as Iowa at home. Of course, so much will depend on how these teams finish down the final stretch and in the Big Ten Tournament. But right now, I would give a slight edge to Indiana over Minnesota, assuming the Big Ten does indeed get six teams into the big dance this year. Of course, it is possible that both Minnesota and Indiana could get in. Given the way things have gone thus far in the Big Ten… Anything could happen.