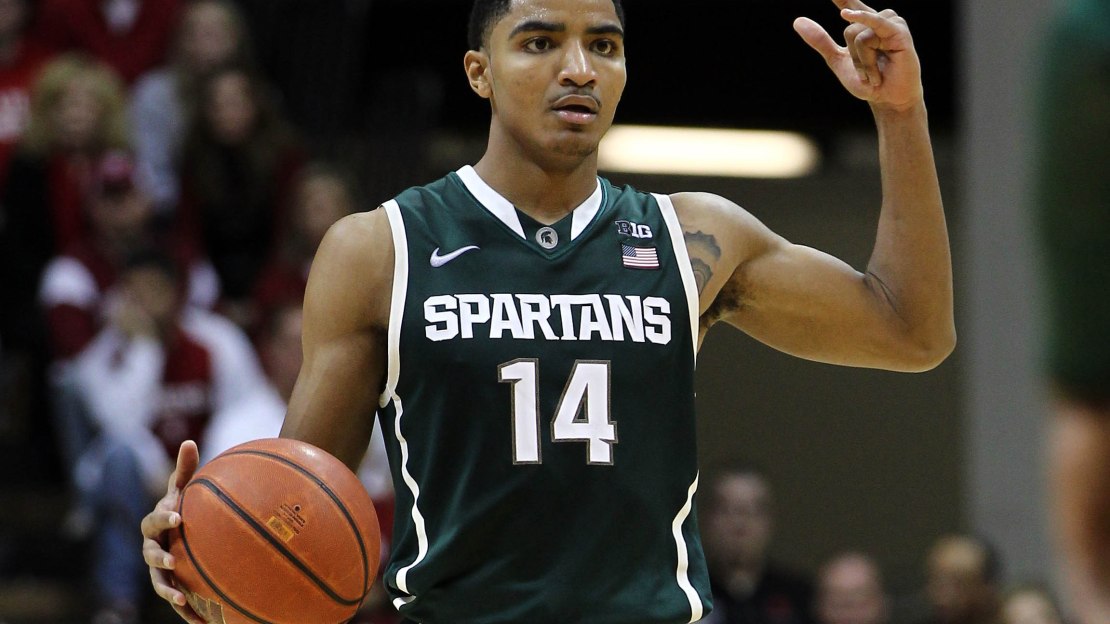 We're now at the official halfway point of the conference season, so it seems an appropriate time to glance at player stats. We've already thrown around some Big Ten POY discussion, but we have enough data now that we can start to look a little deeper.

Courtesy of statsheet.com, the following table contains the conference-only numbers for players that meet the following criteria: minute percentage above 60 percent, possession percentage above 22 percent, offensive rating above 100. These are the best of the best, the efficient possession-consumers, at least during the first half of Big Ten play.

There are 13 players that meet those criteria, representing 10 teams. Only Northwestern and Illinois are without an efficient consumer of possessions, which tells you something about the state of those offenses.

In the player-of-the-year race, I'm still keying in on Gary Harris and Nik Stauskas. A strong case could also be made for Yogi Ferrell, who has been nearly as efficient as the other two with more responsibility (not to mention less talent around him), but the reality is that the POY isn't going to be chosen from a team that might not make the NCAA tournament.

Let's delve deeper in the Harris/Stauskas debate by adding some defensive metrics.

Stauskas has a slight advantage in offensive production, but Gary Harris has been phenomenal on the defensive end. I was leaning to Team Stauskas just a couple weeks ago, but Harris is now the obvious front-runner.

Our preseason pick, Sam Dekker, hasn't exploded this season the way we thought he would, though there is still time to make up ground. The reality is that Dekker will have to play better AND Wisconsin will have to nearly win out for him to enter the discussion. Mea culpa.

We can't put up that table without talking about the guys at the top.

Terran Petteway has blown away any reasonable expectations after his sit-out year. This is a guy that was downright awful as a role player at Texas Tech, and he's now an all-conference player in the nation's best conference. We're seeing something of a monster sophomore leap, as Petteway not only became a sophomore but got an extra year of practice to do it. We expected Shavon Shields to take over as the face of the Nebraska basketball program, but Petteway has clearly done it, and he's got another two seasons after this one to terrorize conference defenses.

LaQuinton Ross deserves some plaudits for the step forward he has taken this season. In our Ohio State preview, we compared Ross to Deshaun Thomas and encouraged the junior to embrace the role of chucker. Embrace it he has, and Ross' play has been the only thing keeping a bad Ohio State offense afloat.

To avoid not seeing the forest for the trees, let's also take a look at the conference race. This weekend brought some impactful results, none more so than Indiana's upset of Michigan in Bloomington. This was a big win for the Hoosiers' still-dim NCAA tournament hopes, but it also opened up the Big Ten title race.

Michigan State is now in the driver's seat, albeit by mere tenths of a win. The result in Bloomington was much more meaningful to the Spartans than their own loss to Georgetown.

The recent run of victories by Northwestern, Nebraska, and Penn State may result in the conference sending a large contingent to the NIT. Minnesota's home loss to the Wildcats has the Gophers balancing precariously on the bubble, and it is a porous defense that has Richard Pitino's team in this spot. Northwestern hadn't scored a point per trip since before Christmas, and the Gophers politely allowed their guests to eclipse that mark. Minnesota has played the worst defense in the conference by a wide margin, and Pitino will have to figure that end out if the Gophers are to go dancing.

Iowa escaped Champaign with a wild win over Illinois.  The Illini looked like they might be on their way to a turning point victory, as they came back from a 21-point deficit to hold a five point lead with nine minutes to go. Instead, it was the Hawkeyes that made all the plays down the stretch, and they stayed on the periphery of the Big Ten race with the road win. Illinois has basically run out of time to get right, save for ripping off five or six wins in a row.

This week's biggest game is the Tuesday night tilt between Ohio State and Iowa. The Buckeyes halted their losing streak with a tight win in Madison, and pulling a similar feat in Iowa City would be a huge statement. The Hawkeyes have a huge week on tap, as this game will be followed with a hosting of Michigan on Saturday. Iowa is favored by KenPom in all but one of its remaining games (March 6 at Michigan State), so this Big Ten title could still land west of the Mississippi.