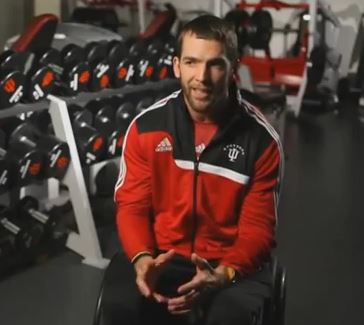 After the Hoosiers? men?s basketball team takes on Nebraska tonight, the Indiana LiveBIG episode sheds light on life-saving proton therapy being done at Indiana University, and introduces you to a man who is defying the odds in Bloomington.

Tom Morris is the assistant strength and conditioning coach at Indiana University, who worked specifically with the men?s soccer team and the women?s basketball team, before his accident.  An accomplished bicyclist and triathlete, Morris was biking at the Wapehani Mountain Bike Park in the spring of 2012 when he flipped over his handlebars near the end of his workout. Despite wearing a helmet, he suffered severe damage to his spinal cord, paralyzing him from the chest down.

After more than a year of rehabilitation in Louisville and Indianapolis, Morris returned to work at IU, coaching athletes from his own high-tech wheelchair. He has full-range use of his upper body, and lifts weights along with his students as he continues his rehabilitation.

?I would not put anything past Tom Morris to achieve,?? IU soccer coach Todd Yeagley said.

Morris? effort to come back from his injury is now the stuff of legend. In less than one month after the accident, Morris was doing not just one push-up, but five, fitting all the upper body work he could manage into a day.

Morris and his wife Christa received financial support from a group of friends calling themselves Tom?s Team. The group managed to raise most of the money for Morris? initial medical bills through a weight-lifting contest, the sponsored participation of IU soccer player Harrison Petts in a triathlon, and the appearance of basketball coach Tom Crean in a Charity Challenge event shown by ESPN.

When the 2012 Indiana University soccer team won the national title in the late fall of that year, Morris was there to see the game, less than six months after the accident.

It didn?t take much for Morris to realize his comeback and the people who supported him through it far outweighed the painful details of his injury.

?I don?t know what?s more overwhelming - the actual injury or the outpouring of support,?? Morris said. ?It made me realize what the Hoosier Nation is all about and what friends and family are all about.?

To see this story and others from the Hoosier Nation, be sure to visit the LiveBIG: Indiana archive.