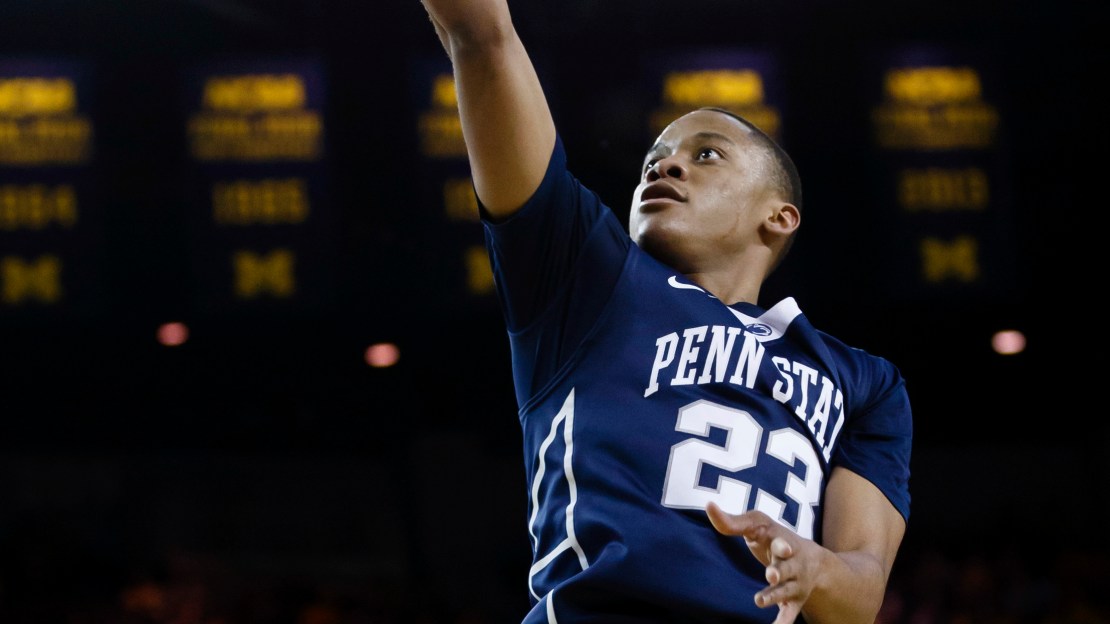 This season hasn?t gone as expected for Penn State, but it?s not because of a lack of effort by point guard Tim Frazier.

Want more? He averages 4.6 rebounds. Bottom line: There are few players more well-rounded or valuable to their team than Frazier, a product of Strake Jesuit in Houston who has 1,365 points, 463 rebounds, 587 assists and 178 steals in his storied Penn State career.

Making his contributions all the more special this season is the fact Frazier-who graduated last May–is coming off a 2012-13 season that was ruined by a torn Achilles tendon in his left leg suffered just over five minutes into the fourth game last season. The season before, Frazier became just the sixth Penn State player to earn first-team All-Big Ten accolades.

I caught up with the fifth-year senior as he prepped for a Wednesday night game at Ohio State.

Q: Your season ended in the fourth game last season with an Achilles? injury. How are you holding up?
A: My health has been fine. There is no pain. My body is responding well and everything is going well. I just want to keep that going.

Q: What were some of the things going through your mind while you were rehabbing last season?
A: It was tough sitting on the sideline and not being able to compete. I tried to stay with a positive attitude throughout the whole thing. Everything happens for a reason. And I knew my time would come. I?m looking at it right now.

Q: Did you ever have doubts if you would be able to come back and play like you did in the past?
A: Of course, that goes through your mind. It ran through my mind throughout the whole process, not being able to walk or jump. But it all served as motivation to get me to work even harder so I could get back to where I was.

Q: At what point did you know you were going to be your old self again?
A: I?m not sure if there was an exact point in time. But maybe during our trip to Europe (before the season). That was my first time competing vs. competition. I was doing some of the things that I was doing before on that trip. And it felt good. That may have been my defining moment, going against competition for the first time.

Q: What were the team goals coming into the season?
A: To try to get better each day, and to be the best team we can be at the end of the year. Just keep competing and improving. We also wanna go out there and have fun.

Q: Is it safe to say that things haven?t gone as expected for you guys, since you are last in the Big Ten with a 1-6 record?
A: Definitely. Our record isn?t what we want it to be. The Big Ten is a great league. We just have to continue to fight and battle each game.

Q: You will go head-to-head with Aaron Craft. What?s it like to battle him?
A: He?s a great player. He has proven that over his four years at Ohio State. And he continues to get better each game. He sets a great example and has a tremendous work ethic. I?m looking forward to competing with him. In this league, you get to play against great players every game out.

Q: Are there any other guys in the Big Ten you like to compete with or watch play?
A: He?s one of them. I love to play against him and watch him. Others that come to mind are Keith Appling and Roy Devyn Marble.

Q: What kind of chemistry do you have with D.J. Newbill?
A: He?s doing a phenomenal job back in his role that he was, playing the two-guard (after playing the point last season when Frazier got hurt). He improved over the summer and continues to play hard. It?s great to have him. He?s a competitor. We both want the same things, to go out and compete each night.

Q: What is your best move?
A: I guess my floater. It really helped me out a few years ago and I continue to try to use that and not go away from it.

Q: What has been your best memory at Penn State?
A: There have been so many, like making the tournament back in 2011. Hitting a game-winner vs. Illinois (in 2012). But this year may be my best moment. Coming back from the injury, my first true injury ever. And to be able to come back from it has been special, especially when things were looking down.

Q: How did you get from Houston to State College, Pa.?
A: The old regime recruited me. I looked into it. I didn?t know much about Penn State growing up. I took a visit and my family loved it. They have good academics, athletics and people. It sold it for me.

Q: Is there one Big Ten venue you like playing in the most?
A: Good question. They all are great. I love playing on the road. If I had to choose one, it probably would be Michigan State. I really enjoy playing there. There is a great student section. It?s fun to go there and knock down shots. It?s a good feeling.

Q: Are you thinking of a pro career?
A: I want to continue if I can. But I am focusing on college for now and will worry about what?s next after that. But I definitely want to keep playing if I can.