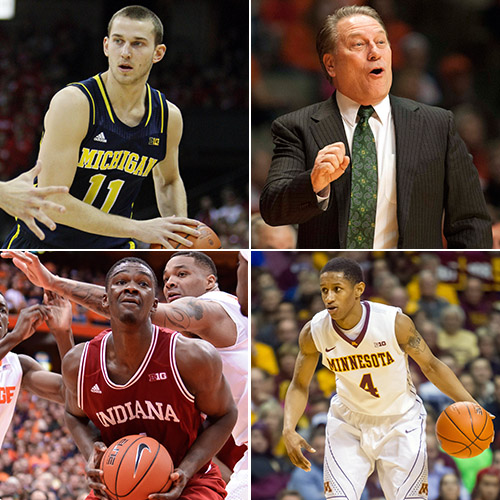 The arrival of the Super Bowl means many things to many people. Ro-tel and Velveeta dip ? the end of the most wonderful time of the year ? spring is approaching. For me, it means we basically are at the halfway point of the Big Ten hoop season.

And I have some questions-and answers–as we start to head down the backstretch. So, let's hand it off to the Big Ten Answer Man.

Q: What are the best games in the second half of the season?
A: Oh, there are several that will go a long way toward shaping a conference race that looks like it will come down to Michigan and Michigan State, with Iowa, Wisconsin and even Ohio State still having chances to make some noise and perhaps win the title. In the meantime, circle these games with your red Sharpie.

Q: Who is the Big Ten MVP?
A: I wish all my test questions in college were this easy. It?s Michigan?s Nik Stauskas. He?s a deadly shooter who continues to improve off the dribble en route to becoming a prolific scorer for the Big Ten?s best team. On top of all of that, the sophomore sensation has become a better defender. No, he isn?t Aaron Craft, but Stauskas no longer is a giant defensive liability. Want more? OK. In conference play, Stauskas is the leader in assist-to-turnover ratio. And that?s pretty good for a guy who isn?t a point guard.

Q: How about Coach of the Year?
A: It?s hard not to be impressed with what John Beilein is doing in Ann Arbor. No Trey Burke. No Tim Hardaway, Jr. And basically no Mitch McGary. No problem, as the Wolverines sit atop the Big Ten with a perfect record. No one was predicating this back in August. And I have been impressed with Richard Pitino at Minnesota. Having typed all of that, however, I am going to go with Michigan State?s Tom Izzo. The guy has had more obstacles to clear than any coach, dealing with injuries to Adreian Payne and Branden Dawson. And Keith Appling hasn?t been in top form as he deals with a wrist injury. Gary Harris also has been dinged. Still, Izzo and MSU have marched on, not missing many beats while playing one of the most daunting schedules in America.

VIDEO: #Spartans Tom Izzo was not happy with Travis Trice, and this face said it all. WATCH – http://t.co/nv6qKWwbLk

Q: Which team has been the biggest disappointment?
A: Indiana. Every preseason prognostication I looked at had the Hoosiers in the NCAA tourney. Well, IU has some work to do on its NCAA resume. The Hoosiers notched no good non-conference wins. And they have one good Big Ten win, taking down Wisconsin in Bloomington. Alas, IU followed that with an ugly home loss to Northwestern. Turnovers and poor shooting are hurting Indiana, which, other than Will Sheehey's one-game absence at Michigan State, hasn?t had any key injuries as it has transitioned to life without Cody Zeller and Victor Oladipo.

Before leaving here, I have to mention Illinois. Not much talent, especially on the offensive end. No, I didn?t think the Fighting Illini were a tourney team. But I also didn?t think Illinois would be one of the Big Ten?s worst teams. And, it certainly has been the first half of the league season.

Q: Who has surprised you the most?
A: No doubt, Michigan has been much better than I anticipated. But Minnesota has been a bigger surprise. Rookie coach Richard Pitino has the Golden Gophers in line to earn an NCAA bid. Who saw this back in the fall? Not many. Pitino is doing it with good guard play from JC transfer DeAndre Mathieu, FIU transfer Malik Smith and Andre and Austin Hollins. And big man Elliott Eliason has been a revelation. This has made for a fun story in the Twin Cities.

Q: Top newcomer?
A: The top freshman has been Indiana's Noah Vonleh. He arrived in Bloomington with a fat scrapbook amid great hype. And, the big, lithe athlete has delivered with a 12.0-point scoring average. His work on the glass has been even better, averaging a Big Ten-best 9.6 rebounds per game.

Minnesota?s diminutive-but-speedy DeAndre Mathieu has been a top-notch JC transfer, pushing the pace and getting to the hole from his point guard slot.

Q: What has been the best Big Ten game?
A: There have been some good ones. For my money, it doesn?t get much better than No. 5 Michigan State?s 72-68 overtime victory in East Lansing vs. No. 3 Ohio State on Jan. 7. If you didn?t have heart problems before watching this, you surely did afterward. The Spartans built a 17-point second half edge only to watch the Buckeyes storm back to tie the game. MSU ended up prevailing in overtime. Whew! Someone get me a towel.

Q: The biggest upset in Big Ten action?
A: Indiana?s 54-47 home loss to Northwestern on Jan. 18 still stuns me. The Hoosiers are supposed to be WAY past losing games like this to a Wildcat club that came in 8-10 overall and 1-4 in the Big Ten. This is a highly decorated Indiana roster led by one of the best-paid coaches in the Big Ten. Northwestern is in full-blown re-tooling mode under rookie coach Chris Collins. Just a shameful loss, which came on the heels of the Hoosiers? inspiring 75-72 home victory vs. No. 3 Wisconsin. Go figure.

Q: Who has the most to prove in the second half?
A: Indiana and Purdue. Each has been a disappointment. As it stands, neither projects as an NCAA team. The Hoosiers are closer, but they have work to do. The Boilermakers are off the rails for a second season in a row, as the bloom seems to have come off Matt Painter. Nine years into his tenure, Painter should be in the midst of building a strong program. Instead, Purdue is floundering and in reverse despite massive facility improvements and a hefty salary for Painter.

Q: How many teams will make the NCAA Tournament?
A: The Big Ten is looking like a six-bid league. Michigan, Michigan State, Iowa, Wisconsin, Ohio State and Minnesota look to be in good shape. The Golden Gophers need to stay on guard. Of the teams on the outside looking in, Indiana may still have a shot if it can finish with a flurry. The only way any other team will make it figures to be by winning the conference tourney.

Q: OK, who will win the Big Ten?
A: Michigan State. Once this Spartan roster is back to 100 percent, MSU will be rolling ? maybe all the way to the Big Ten?s first national championship since MSU won it all in 1999-2000.