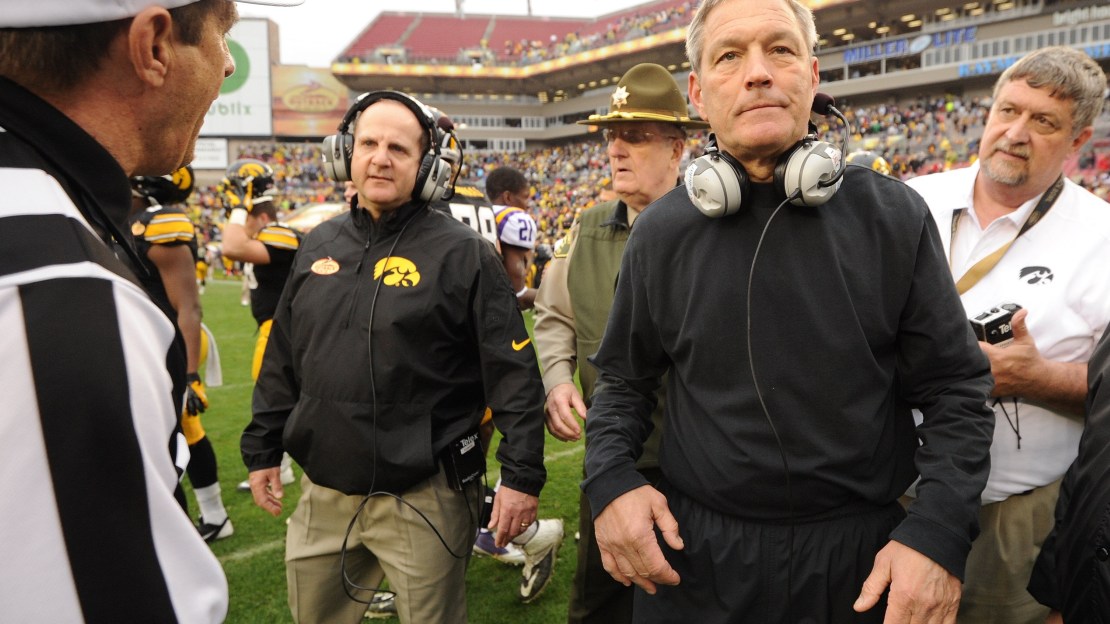 Happy Signing Day, Big Ten fans! The classes are filling up fast, with early reports showing Ohio State in line to ink the top collection of talent in the Big Ten. Here?s a look at the recruiting needs for each school, as we all cast an eye toward the future and get excited about the possibilities.

ILLINOIS
Tim Beckman?s third class is a critical one. The Fighting Illini have lost players like QB Nathan Scheelhaase, WR Ryan Lankford and LB Jonathan Brown, so work remains—especially on the defensive side of the ball. Playmakers on the perimeter of the offense are needed.

INDIANA
WR Cody Latimer turned pro, which hurts. Also, WR Kofi Hughes and TE Ted Bolser are gone. And an awful defense always can use more speed and athletic ability, as the move to a 3-4 is about to begin with a new coordinator. The search for a stud passer continues.

MICHIGAN
This is a younger roster that teems with talent. WR Jeremy Gallon and OTs Taylor Lewan and Michael Schofield are gone, along with RB Fitz Toussaint. Players like S Thomas Gordon, Ts Jibreel Black and Quinton Washington and LB Cam Gordon are gone from a defense that returns a lot of young talent.

MINNESOTA
This offense needs some juice on the perimeter, as the search continues for big-play wideouts. Jerry Kill always says you cannot recruit enough QBs. He converts a lot of them to other positions like Donovahn Jones, Maxx Williams and KJ Maye. The defense always is looking to upgrade speed and athletic ability at linebacker. The Gophers lose guys like DT Ra?Shede Hageman, DB Brock Vereen, LB Aaron Hill and OT Ed Olson.

NEBRASKA
The o-line has some rehabbing to do with Spencer Long, Brent Ovale and Jeremiah Sirles gone, among others.  The secondary will miss CBs Stanley Jean-Baptiste and Andrew Green. The roster could use some wideouts for the future, as well as some running backs.

NORTHWESTERN
This will be a small class, but it will have some punch. Pat Fitzgerald always likes to load up on running backs. And look for the staff to continue to add speed on defense, as the unit gets more athletic each passing season. A pass rusher is needed with DE Tyler Scott gone. LB Damien Proby also is gone.

OHIO STATE
What was the Big Ten?s top offensive line has been ravaged by graduation with guys like Jack Mewhort, Andrew Norwell, Corey Linsley gone. And anyone who saw the OSU defense knows the secondary needs help. CB Bradley Roby has turned pro. Linebackers need help, too, especially with Ryan Shazier off a year early like Roby.

PENN STATE
WR Allen Robinson has turned pro and fellow WR Brandon Moseby-Felder is gone, as the new staff needs some help on the edge. Linebacker U will miss Glenn Carson, and big DT DaQuan Jones up front. Also, the safety spot needs an injection of speed, while the o-line takes some hits with guys like John Urschel, Adam Gress and Ty Howle gone.

PURDUE
Pick an area, and help is needed. The need for offensive tackles is huge.  The entire defense needs help-and lots of it. The linebacker corps in particular is a disaster. Depth is needed at defensive back and cornerback. Bottom line: The Boilers would sign a 50-man class, it they could. Talent may be at an all-time low.

WISCONSIN
They will try to sign at least six offensive linemen. Anyone who has seen this offense knows the need for big-play wideouts. Field-stretchers are needed with Jared Abbrederis gone. The defense needs help at safety. In fact, better speed and athletic ability are needed on the back end. The front seven on defense is gutted with guys like LBs Chris Borland, Brendan Kelly, Ethan Armstrong and linemen Beau Allen, Tyler Dippel, Ethan Hemer and Pat Muldoon gone.