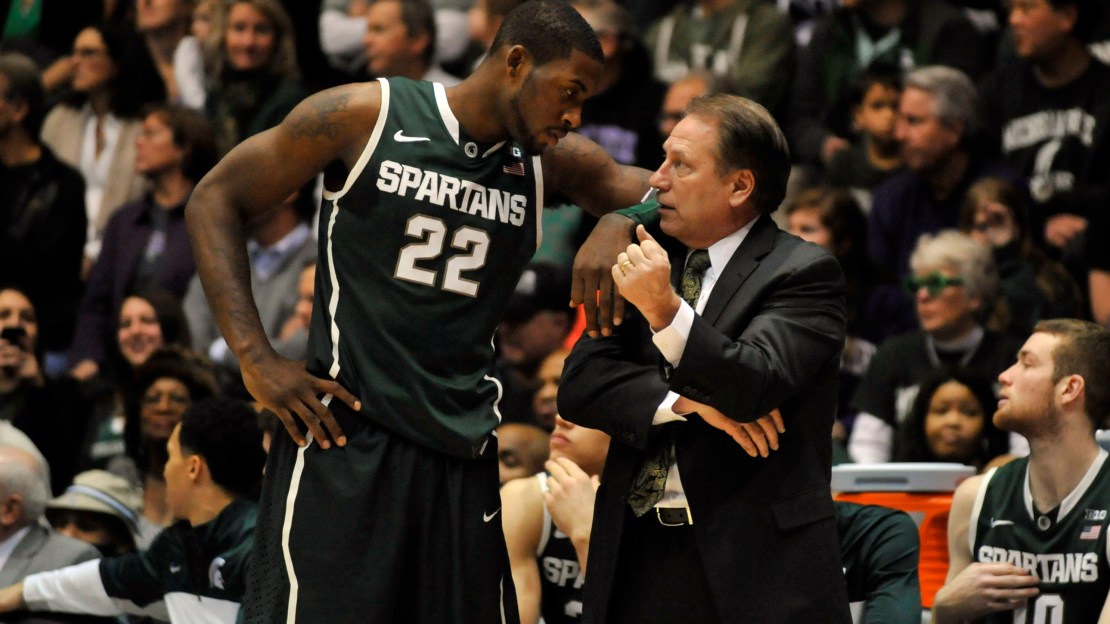 If it?s not one thing, it?s another for Michigan State. Or, so it seems. News broke late Thursday afternoon that Branden Dawson had broken his right hand and will be out four to five weeks. How did it happen? Dawson slammed his hand on a table in frustration while watching film. He explains in this video. Looks Kenny Kaminski will need to step up as a defender on Glenn Robinson III. Meanwhile, reaction in social media circles has been critical. And that has MSU coach Tom Izzo fuming.

"I hate the social media," said Izzo. "And I hate it more because I got managers running up to me saying our own fans and people are ripping. If anyone rips BJ, anybody rips BJ, it'll be me. If any other fan rips BJ on something that we've all done, every guy in this room, every fan, I'm going to be more disappointed.

"If Michigan fans rip him, God bless 'em. If one Michigan State fan rips him — one, one — give 'em my number."

My question: Why should Izzo care so much about what is written on social media? Just coach the team. And worry about trying to beat Michigan on Saturday.

No doubt, Tom Izzo will have his work cut out for him in this battle for Big Ten supremacy. The absence of Branden Dawson-and probably Adreian Payne-means Michigan?s prospects for victory have improved in this big game. Yes, it?s a big rivalry. But John Beilein says ?We don?t circle any games.?

Still, whomever wins will have a leg up on the rest of the league. For what it?s worth, the Spartans thumped the Wolverines, 75-52, in East Lansing last season.

The misery continues for Illinois, which suffered its fifth loss in a row last night after starting Big Ten play 2-0. The bad times may roll on with games at Indiana, vs. Iowa and vs. Wisconsin next. Oh, boy. Has full-blown panic set in yet for Illinois?

What has happened to Rayvonte Rice? He missed all eight shots and didn?t score vs. Ohio State last night. The Illini need to find the guy who led the Big Ten in scoring earlier this season.

Ding dong! Ohio State?s four-game losing streak is over! And the Buckeyes did it with some good shooting! Yes, I said ?good shooting!? Lenzelle Smith, Jr., was the hot hand. He needs to keep it up. Oh, and the defense started to look like it used to back when OSU was rolling. The Buckeyes forced turnovers and scored off them.

James Franklin hasn?t been on the job for long, but Bob Flounders of Pennlive.com already has a to-do list for him.

The one that caught my eye was ?closing the gap on the Buckeyes.? Good luck with that. But, I?m not gonna discount or underestimate Franklin. The guy is good. Just give him time.

Oh, and this is interesting. When Penn State A.D. Dave Joyner courted Bill O'Brien after the 2011 season, he asked him to FedEx his resume and cover letter. However, the envelope containing the information was lost in the department mailroom for eight days until O'Brien called to make sure they'd received it. Holy Toledo!

Talk amongst yourselves. I have nothing more to say.

Hey, Michael Rand of the Minneapolis Star-Tribune believes in the Golden Gophers. And, that?s good enough for me. Check out this video.

Minnesota has been a revelation this season under Richard Pitino. I didn?t see it coming. But the Gophers look like an NCAA tourney team, thanks to some good guard play-how about DeAndre Mathieu?–and a still-developing interior game led by Elliott Eliason and Mo Walker.

Anyone who saw Ohio State play last season realizes the Buckeyes need help at linebacker. The position has been substandard for a few seasons, to be honest. And the early departure of Ryan Shazier only exasperates the situation.

Vets Joshua Perry and Curtis Grant need to take their games to another level. But look for some young studs–Sam Hubbard, Kyle Berger and Dante Booker, among others– to make an impact-or at least that?s the hope.

Today, Penn State coach James Franklin introduces his coach staff. His offensive line coach is Herb Hand. I?ll leave you with this inspirational story about how he overcame a potentially life-altering experience. Amazing. Enjoy your weekend!

My take: Nebraska hoops has to get better, right?

What a bad loss. No excuses here. Penn State played terrible and Nebraska still couldn't close them out.

My take: Yep. That was a game the Cornhuskers needed to win.

All this UM/MSU talk — would anyone else be cool watching just Gary Harris/Nik Stauskas play to 11 by 1's for 2 hours?

My take: No doubt. With Dawson out of the picture, Michigan?s prospects for a win in East Lansing just went up.

Not the prettiest of wins, but the Buckeyes just needed one. Now you just try to keep building from here.

My take: OSU needs to build on this. The next three are vs. Penn State, at Wisconsin, at Iowa. Hmmm.

For those who think Izzo is being coy on Payne, he's not — Payne is doing absolutely nothing in practice. Big game, not bigger than March.

My take: So, sounds like no Payne for Saturday.

Even if he's not finishing, Rice has to get to the FT line. Hasn't shot one in last 2 games. That says a lot. #dechr

My take: This is amazing. C?mon, Rayvonte. Is he still hurt?

Great to see Sobo will be back in uni vs Iowa. 'Cats can use depth off the bench to spell Cobb, Demps.

My take: NU already has dumped Illinois and Purdue in Evanston. Beware, Iowa.

#Badgers @BenBrust on confidence. "I know we can beat any team in the country. But we need to show up and do it."

My take: It has to start at Purdue this weekend.

Unless there is a shocking B10 Tournament champion (automatic bid), I just don't see B10 getting more than 6 in NCAA tournament.

My take: And six may be stretching it.