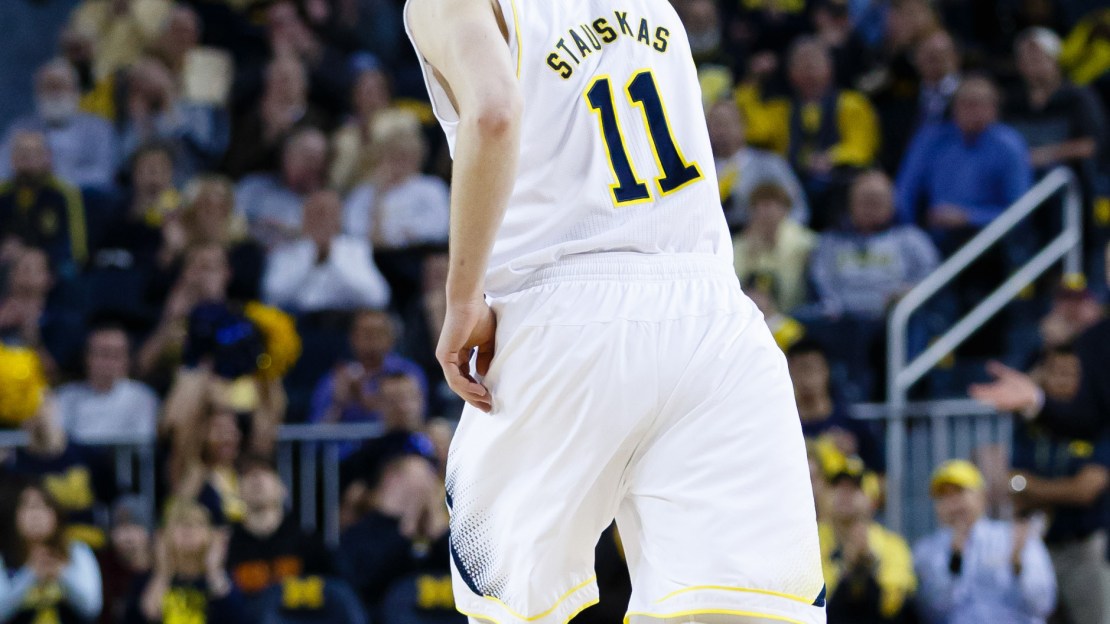 We already knew Michigan's Nik Stauskas was one of the top shooters in the Big Ten. This 3-point dagger last Saturday at Wisconsin was further proof of that.

But the 6-6, 205-pound Stauskas also has emerged as one of the top players in the conference.

With Trey Burke and Tim Hardaway Jr., gone from last year?s national runner-up team, Michigan has needed Stauskas to step up. Adding to the sense of urgency has been the absence of big man Mitch McGary, who has played in just eight games as he recovers from a back injury.

Stauskas, a sophomore from Mississauga, Ont., has increased his scoring average from 11.0 points per game to a Big Ten-leading 18.0 this season. He also has improved his 3-point shooting from 46 percent to almost 49 percent for a Wolverines squad that is 13-4 overall and atop the Big Ten with a 5-0 mark. (Michigan State also is unbeaten at 6-0).

Michigan will need Stauskas at his best with a big week on tap. The Wolverines play host tonight to a hot Iowa team that is 4-1 in the Big Ten. On Saturday, Michigan plays at Michigan State in what could be the Big Ten ?game of the year?-at least up to this point.

I caught up with Stauskas as he prepped for this season-defining week.

Q: Was that shot you hit at Wisconsin on Saturday the biggest of your career?
A: At Michigan, yes, that?s probably the biggest one I have hit. I had passed up a few shots before that. Coach Beilein and some of my teammates were getting on me about staying aggressive, to keep shooting even though I had missed a couple shots. They gave me the ball and set me a high-ball screen. I think Jordan Morgan slipped the screen and I was one-on-one. I just pulled back for an open three-pointer and I hit it.

It's so beautiful, here's the shot again:

Q: So, you have hit bigger shots than that before in your career?
A: I?ve hit game-winners at the buzzer before but never at Michigan with that kind of crowd.

Q: With Trey Burke and Tim Hardaway Jr., gone, have you felt the need to step up your game?
A: After Trey and Tim left, we knew we were going to have to have people step up. That was 50-75 percent of our offense last year, going through them. Guys like me, Caris (LeVert) and Glenn (Robinson) knew we were going to have to step up our scoring to be effective this year.

Q: How much do you miss having Mitch McGary on the court?
A: A lot. He brings a lot of energy. We?d like to have him on the court, but even just having him on the bench helps us a lot because of the positive energy he brings to the team.

Q: During the season, how many shots do you take a day?
A: It just depends. I try to get 100-150 up before practice. And about the same amount after practice. I shoot during practices. So, probably between 300-400.

Q: Any shooters you admired growing up?
A: Growing up, I really didn?t have anyone I admired as a shooter. I was always a fan of LeBron, Allen Iverson, Kobe. I never really had a shooter as my role model.

Q: What part of John Beilein?s offense do you like best?
A: Probably the ball screens we use. While at Michigan, I have learned how to read ball screens better. I have gotten pretty good at playing though them. The coaches are giving me a lot of opportunity to run them this year. I enjoy that a lot.

Q: Growing up in Canada, did you play some hockey?
A: Never. I never played hockey.

Q: How did a Canadian kid get so dialed into basketball?
A: My uncle was coaching his own club basketball team. When I was like 8 years old, he invited me to play. And that?s how it all got started.

Q: Who is the greatest Canadian basketball player ever?
A: Definitely, it?s Steve Nash, without a doubt.

Q: How do teams try to defend you?
A: It has changed a lot this year. A lot of teams try to deny me the ball now, so I can?t even catch it on the wing. I also see a lot of help defense on my side of the court, so I can?t really get a lot of open threes. Guys are more physical with me this year, too.

Q: Big week for Michigan, as you guys play Iowa and Michigan State. What?s this week mean to the program?
A: These games are going to be huge for us. It will be a really good test to see where we stand in the Big Ten. We are going up against some of the top teams. Right now, we are 5-0. But if we can come out and get a couple wins, we will head into the rest of the season with a head start on everyone else.