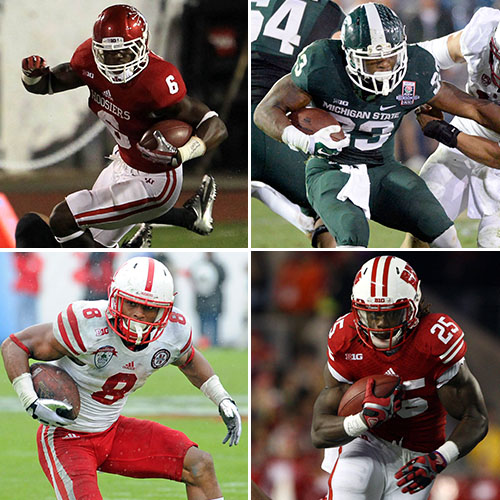 Northwestern received great news Tuesday, as running back Venric Mark was granted a medical hardship for a fifth season of eligibility. Mark?s return bolsters what will be a strong collection of running backs in the Big Ten in 2014. Here?s my ranking of the conference?s Top 10 backs for next season.

Before I get to my list, there's more on Mark. The Wildcat speedster was limited to three games last fall while battling multiple injuries. He played for the last time on Oct. 12 at Wisconsin, leaving in the first quarter with a fractured ankle that sidelined him for the rest of 2013.

10. Ezekiel Elliott, Ohio State, So. Braxton Miller is back after running for 1,068 yards but sidekick Carlos Hyde is gone after running for 1,521 yards last season. The Buckeyes have a raft of promising young runners. The speedy Elliott (6-0, 218) may be the best of all. As a true freshman last year, he averaged 8.7 yards per carry in running for 262 yards. Look for those numbers to rise, as Urban Meyer loves to run the ball.

9. Corey Clement, Wisconsin, So. With James White and his 1,444 yards rushing from 2013 gone, the 5-11, 210-pound Clement figures to step up. He flashed speed and big-play ability as a true freshman last year, running for 547 yards and averaging 8.2 yards per carry. He looks like a special back.

8. Mark Weisman, Iowa, Sr. The bullish 236-pound Weisman is more fullback than running back. It doesn?t matter. He?s good. Weisman rushed for 865 yards last season and 815 in 2012. Not bad for a guy who arrived as a walk-on transfer fullback from Air Force. Weisman is part of a deep pool of Hawkeye backs that also includes Damon Bullock and Jordan Canzeri.

4. Jeremy Langford, Michigan State, Sr. The 6-0, 206-pound Langford emerged after also seeing time at receiver and cornerback earlier in his career. A physical back with a bit of burst, Langford became a workhorse last fall by running for 1,422 yards with a league-high 18 rushing TDs. Langford ran for over 100 yards in each of MSU?s last eight games, a school record. Where would the Spartan offense had been without him?

2. Ameer Abdullah, Nebraska, Sr. The diminutive (5-9/190) Abdullah contemplated turning pro after leading the Big Ten with 1,690 yards rushing in 2013. He has rushed for over 1,000 yards in consecutive season and has eclipsed the 100-yard rushing mark in 10 of the last 12 games. Abdullah also is a fine pass-catcher. A tough, quick, strong runner who plays bigger than his size.

VIDEO: Did you see @Huskers' Ameer Abdullah hurdle a defender? It was fantastic! #orvillemoment WATCH – http://t.co/8gwhGdZOqE