Big Ten Geeks: Back to square one 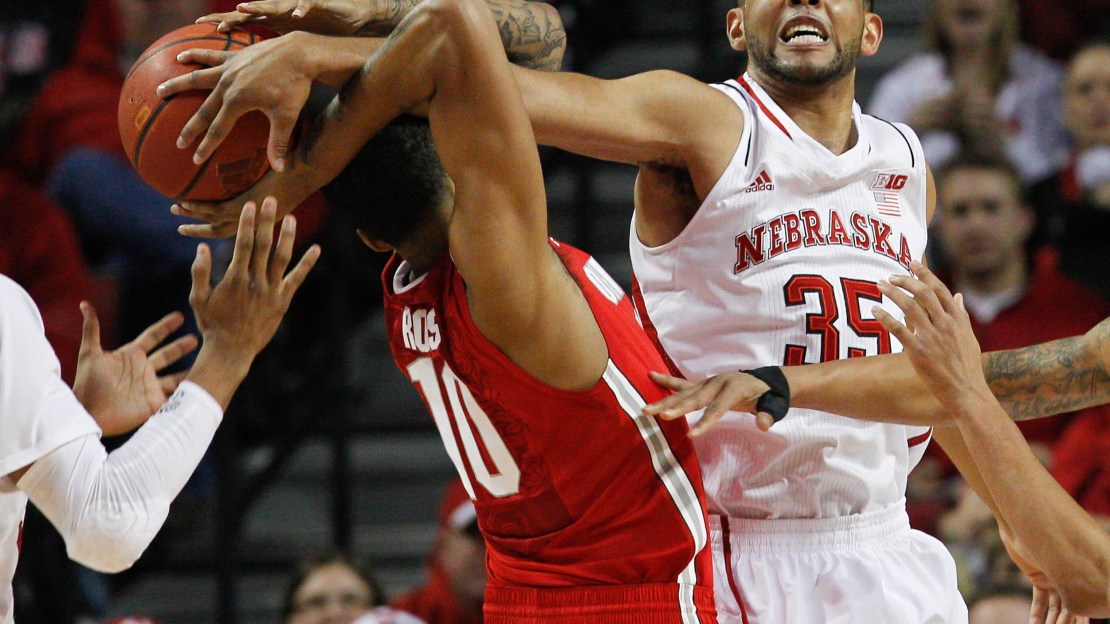 Weekends like this one have me considering whether it?s just better to disregard the non-conference season entirely. Because despite the last three months, there was a lot of reverting to preseason expectations. In turn?

Wisconsin?s Defense is a Concern

Last year the Badgers were an elite defensive unit that couldn?t score. A big reason for that was the team adopted the personalities of its two senior leaders, Ryan Evans and Jared Berggren. Both players were fantastic defenders, but they also struggled to put the ball in the basket. With those offensive anchors removed-and replaced by personnel with loads of offensive potential-the narrative was that this year?s Wisconsin team would be a powerhouse offensive team that would struggle at times to get stops.

Well, in the non-conference slate that fell apart. Wisconsin was great offensively, but the team was also pretty darn good on defense, as well. But after giving up over 1.1 points per possession for the second-straight game-this time at home-I?m wondering if we?re just seeing the real Wisconsin.

OK, so it?s probably not that, or at least not quite that. Wisconsin is certainly nowhere close to matching last season on the defensive end-no Big Ten opponent scored 1.1 points per possession against Evans & Berggren last year. But even with these slip-ups, the Badgers rank 4th in conference play in defensive efficiency, and that?s with some absolutely terrible defensive rebounding. Nothing screams ?statistical anomaly!? quite like a Bo Ryan team that isn?t rebounding.

But let?s give some credit to Michigan on Saturday as well. This team was red-hot from the field, shooting 54 percent on 3s and 43 percent on long 2s, which isn?t easy against a Badger team that usually defends the perimeter pretty well. Nik Stauskas led the way with 23 points on 17 shots, and to me looks like someone that will be on an NBA roster in the near future. The three-pointer at the end of the game to seal the win-there aren?t many players in the college ranks that can do this:

Next up on our preseason narratives is that the Hoosiers and Illini were going to struggle putting the ball in the basket. And thus far in conference play, that?s been true. IU had a particularly ugly showing against lowly Northwestern (even after the Wildcats? recent play, I?m not ready to label them anything better than ?bad?), scoring 0.73 points per possession. The last time Indiana scored at such a pitiful rate, Bobby Capobianco was in the starting lineup.

But I want to give Chris Collins a lot of credit for Northwestern?s approach. The Wildcats generally didn?t close out hard on Indiana from the perimeter, because they knew the Hoosiers struggle to hit shots from the outside (IU ended up 4 of 18 from 3). That reduced the number of blowbys available for Indiana?s quick backcourt, and on the interior Alex Olah did a great job of standing tall without fouling (6 blocks and just 3 fouls in 35 minutes). The result was Indiana attempted just 17 free throws against 60 field goal attempts, which is a very low number against the Hoosiers, especially in Bloomington. This marks three games in a row in which Northwestern has held the opponent at or under 1 point per possession. The offense is still a very, very long way from respectable, but Collins already has the defense playing at levels unheard of in the Carmody era. And over the past three games, I?ve been impressed with the specific defensive approach for each opponent. Big Ten coaches have no equals when it comes to pre-game scouting, and so far Collins appears to fit right in, in that regard.

Illinois also displayed some lousy shooting in a home loss to Michigan State. The Illini made a living in the non-conference season by aggressive drives to the hoop, but now they?re finding those shots blocked. Even without the services of Adreian Payne, MSU blocked 18 percent of Illinois? two-point attempts. That might have been a big reason why Illinois did not even attempt many shots at the rim-just 10 of its 61 attempts. Rayvonte Rice (12 points, 15 shots) looked like an all-league player in the non-conference season, but now he?s gone cold from the outside and his big frame isn?t creating space against Big Ten defenders. Illinois? only consistent threat right now looks like Tracy Abrams (15 points, 11 shots). And to make matters worse, Illinois? defense is no longer much of a strength, either (7th in conference play). This is the beginning of a very difficult stretch for the Illini, who could be in the midst of their worst season in 15 years or so.

Michigan State, meanwhile, has recovered from a non-conference performance that was a bit below the (admittedly high) expectations for that team. The Spartans look every bit the part of a title contender-for both the Big Ten and nationally. Gary Harris led the way with 23 points on just 9 shots.

Interior Scoring and Interior Defense is a Problem for Penn State

Turns out, only one of those things was true against Purdue on Saturday. Well, kind of. While Penn State?s 44 percent conversion rate on 2s was not a thing of beauty, it looked fantastic against Purdue?s 31 percent. But Penn State really let the game go on the glass, allowing the Boilermakers to collect 42 percent of their misses. And to be fair, Penn State?s liberal interpretation of the rules might have had something to do with why Purdue had a tough time finishing. Even though the refs largely ?let them play,? every Penn State player taller than 6-5 that played more than 1 minute picked up at least 4 fouls. SMU transfer Jordan Dickerson won the Bobby Capobianco Award with 4 fouls in 7 minutes.

This was a weird game, all around. A.J. Hammons scored 10 points, including the game-winning free throw with 1.1 seconds left, but he didn?t make a single field goal. But the final two minutes of this game belonged in a Benny Hill special. Hammons actually missed four free throws in the final two minutes (though the last one might have been on purpose). Terone Johnson made a game-tying three-pointer which counted only because the referees did not notice Matt Painter calling timeout. Penn State threw the ball away on the inbound, and then Purdue got a bizarre advance-the-ball break when it got to throw the ball in on the final play right in front of the bench.

Frankly, ?getting breaks? is a good slogan for this year?s Purdue team. Despite playing some mediocre basketball for most of the season, this team has a chance to go dancing in large part due to going 6-1 in games decided by 5 points or less. Will that luck hold up all season? Probably not, but no one can take those wins away now. And there?s still the danger that, any moment now, this team might realize it has a lot of talent and has no business being this bad.

Ohio State Does Not Have Enough Offensive Weapons

Nebraska picked up the biggest win of the Tim Miles Era when it took down Ohio State in the brand-new Pinnacle Bank Arena. While it was certainly significant that the Huskers managed to score roughly a point per possession against a stout Buckeye defense, the story for Ohio State continues to be that-outside LaQuinton Ross-no one is willing and able to put the ball in the basket at a very high rate.

Shannon Scott and Aaron Craft are excellent defenders, but they are flawed point guards. Both of them turn the ball over too much without creating a ton of opportunities for their teammates, and both are suspect outside shooters. For his part Craft does get to the free throw line at a high rate, though I have my doubts he can sustain such a high figure. Outside of the Nebraska game, he has not shot more than 3 free throws in any Big Ten game this season. But perhaps most problematic is that Scott and Craft are middling offensive players despite not being tasked to do all that much on offense.

The role players pretty much extend to the rest of the roster-again, outside Ross-with one notable exception. Freshman Marc Loving has not only consumed a lot of possessions while he?s been on the floor, but he?s also been pretty efficient with those possessions. And this is not merely a mirage created by feasting on the likes of North Dakota State, as Loving has been quite prolific in conference play as well:

It?s too early to forecast a similar career arc for Loving, though it should be pointed out that he?s already a better defender than Thomas ever was. And with the offense struggling, a healthy dose of Loving could be the cure for what ails Ohio State at the moment.

This is no small problem, either. For as good as the Buckeyes are, even in light of this losing streak (right now, ranked at 15 in Pomeroy), the Big Ten is a conference of two worlds, with Minnesota the only team in the middle: 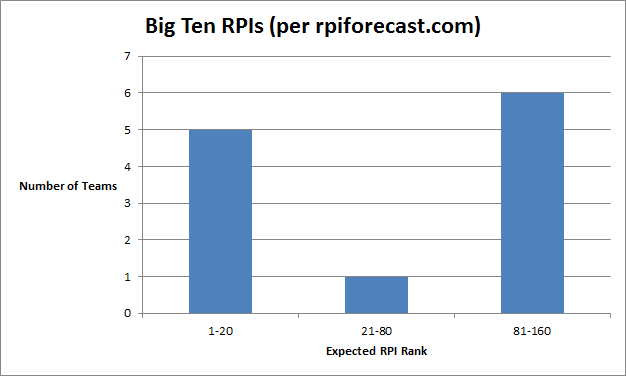 Therein lies Ohio State?s problem-the team is already 0-2 against the top group of teams, and has also lost a game against Minnesota. The Buckeyes still have a lot of chances against the top of the conference, but none of those look like sure things.

Matta has not played in one of those non-conference neutral-site tournaments since 2009, which means that the number of quality non-conference games is going to be limited. This season might severely penalize Ohio State for that approach, unless the team can get its offense turned around.

Iowa Can Shoot After All

Enough with the bad news-let?s focus on some positives. One of the things we predicted for Iowa this season was that last year?s outside inaccuracy wasn?t likely to have much staying power. This was a solid outside shooting team in 2012 which fell off a cliff in 2013, despite some touch displayed at the free throw line.

Well, after the admittedly small sample of five games, the Iowa Hawkeyes are currently the best outside shooting team in Big Ten play. That marksmanship was on full display as Iowa pummeled Minnesota in the 2nd half for a 21-point win.

The statistic is also a bit misleading, because right now no one is shooting fewer threes in Big Ten play than Iowa, although that?s not so outrageous for a team that often has four players on the floor standing 6-6 or taller.

A tall team that can shoot and does not turn the ball over? Good luck with that, Big Ten.