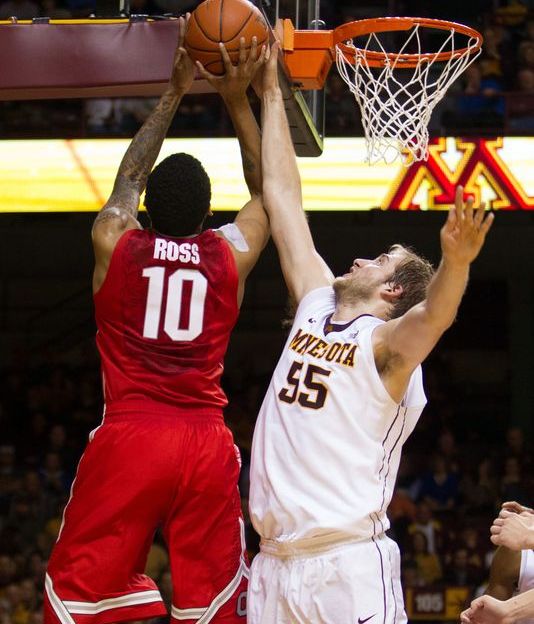 Minnesota picked up a huge resume win over Ohio State, 63-53 in 63 possessions. The story of this game was on the interior, where Elliott Eliason made his presence felt on both ends. The bearded big man went 6-for-8 on twos, leading a Gopher attack that scored a point per trip despite a bad night from the perimeter.

Minnesota's poor three-point shooting and bad turnover rate weren't a huge surprise, given the defensive strength of the Buckeye backcourt, but the Gophers' ability to score inside was unexpected.

Minnesota managed to attempt 30 percent of its shots right at the rim, which in itself is not a remarkable number – Ohio State's defense gives up an average of 37 percent.

The remarkable thing was the rate at which the Gophers converted those inside looks.

The Buckeyes typically block a lot of dunk and layup attempts, led by Amir Williams, but that didn't happen on this night. Williams blocked only one shot in his 22 minutes, and it was a two-point jumper by Andre Hollins. Minnesota did a great job of getting easy attempts at  the rim, as opposed to challenged ones, and it led to the outstanding conversation rate.

On the other end, the Gophers' zone befuddled Ohio State and turned it into a jump-shooting team, with a mere 18 percent of the Buckeyes' attempts coming at the rim. Ohio State isn't a terrible jump-shooting team, but it's not a good one either, and the result was a multitude of missed two-point jumpers. A combined nine turnovers from Aaron Craft and Shannon Scott didn't help matters.

With this win, Minnesota is looking like a safe bet for an NCAA tournament bid. KenPom projects the Gophers to finish 10-8 in conference play, and Minnesota's nonconference resume is decent enough that they'd unquestionably be in. Perhaps most encouraging is the fact that the Gophers knocked off a good team on a night when they didn't shoot well from three. For a team that came into the season with big questions on the interior, that's an excellent sign.

For Ohio State, a team that had looked like yet another Thad Matta-led title contender is suddenly looking for answers. The offense has scuffled as competition has stiffened, and it looks like turnovers and outside shooting are real problems for this team. The defense is still good enough to keep the Buckeyes in every game, but this no longer looks like a contender for the Big Ten crown. The good news is that the upcoming stretch offers plenty of opportunity to get right (at Nebraska, vs Illinois, vs Penn State).

On Wednesday night, Purdue picked up a big road win over a reeling Illinois team. This one was all about the glass, as the Boilermakers rebounded 46 percent of their misses, led by A.J. Hammons' five offensive boards. Between that and a low turnover rate, it didn't take much for Purdue to post over a point per possession, which was enough against a struggling Illini offense that has now gone three straight games below that threshold.

The Boilers still have serious work to do if they hope to get into the NCAA tournament discussion, but this was a good start.

For Illinois, this loss may have slammed the door on any lingering at-large hopes. The losing streak is at three, and it's an open question as to whether it will stop any time soon. KenPom does not have the Illini favored until a late February hosting of Nebraska. Illinois defends well enough, but that offense is putrid and would be the worst in the conference most seasons (hello, Northwestern!). We expected John Groce to take some lumps in his second season, and a temporary flirtation with at-large candidacy seems to be over.

This weekend brings nearly a full slate of Big Ten games, with only Ohio State and Nebraska waiting until Monday. Four of the conference's upper half are tangling with each other as Wisconsin hosts Michigan and Iowa hosts Minnesota. Illinois' at-large hopes can take one last gasp with a Saturday night hosting of Michigan State.