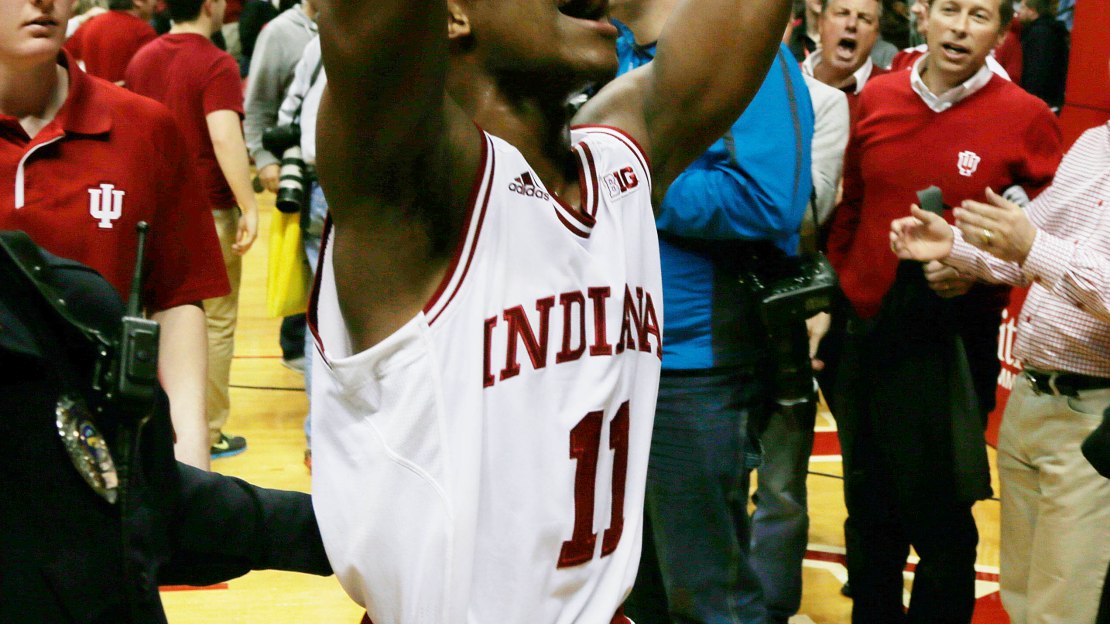 Big win last night for Indiana over unbeaten Wisconsin. BIG win. This was the signature victory that had been lacking from the Hoosiers? resume. It?s also a victory that may spark Indiana in what thus far has been a lackluster season. How big was the win for IU fans? They rushed the court. Seemed a bit excessive, but, what the heck.

I have a feeling young and talented IU is only gonna get better and better.

I also think this loss by the Badgers may be just what they needed. The pressure of being unbeaten is gone. And Bo Ryan will have the full attention of his players now that they have tasted defeat. No doubt, the focus of Wisconsin will be tighter now that the players know they can be beaten. The Badger defense was spotty, and they looked to be playing not to lose rather than to win.

Urban Meyer had to make two hires to fill out his defensive staff with Mike Vrabel (Texans) and Everett Withers (James Madison) off and away. And, it looks like he ?done good.? Word broke on Tuesday that Meyer had grabbed Larry Johnson from Penn State to coach the defensive line and be a super recruiter. Fabulous get. Next came word that Meyer was going to hire Arkansas defensive coordinator Chris Ash, a former Wisconsin DC whose area of expertise is the secondary. And anyone who saw the Buckeye secondary in 2013 knows the unit needs help.

Not long ago, OSU offensive coordinator Tom Herman told me Ash got the better of him when they met in 2012.

How about this: With a win over Penn State, Michigan is 4-0 in the Big Ten for the first time since 2003. How long ago was that? Here?s some perspective: Wolverines freshman point man Derrick Walton was 7 years old. The next three games will go a long way toward telling us how good this Michigan squad is: at Wisconsin; vs. Iowa; at Michigan State.

Don?t care how you spin this, but variable pricing for Penn State football games isn?t great news for the school.

Yes, the new price structure introduced by the school will make games more affordable. But if things were going along swimmingly, the school wouldn?t have to do this. Penn State averaged 96,587 in 2013, which was fifth nationally but well below Beaver Stadium's capacity of nearly 110,000.

Remember what Franklin said about attendance during his press conference? If not, watch it here:

Iowa is pretty good at basketball. Don?t believe me? Check out these stats.

Iowa ranks in the upper half of almost every statistical category that matters in conference play.

This guy is as legit a Big Ten Player of the Year candidate as there is. Marble?s 22-point effort in the win at Ohio State on Sunday was about as fine as you?ll witness. Marble was 7-of-13 from the field and 8-of-11 from the free-throw line, but he also grabbed four rebounds, dished three assists, collected three steals and blocked two shots. Before that game, Marble had a 15-point, six-assist, zero-turnover performance against Northwestern last week.

Looks like the staff of new Penn State coach James Franklin is starting to fill out, as four of his Vanderbilt assistants could be close to signing on.

It?s important for Franklin to get his group together, because coaches can hit the road recruiting beginning on Thursday with the end of recent ?dead period.?

Hollins is averaging 7.8 points on 28 percent shooting in four Big Ten games for the Gophers, who face their toughest home game this season Thursday night against No. 11 Ohio State. Yes, Minnesota has had a nice season thus far. But for the Gophers to have any shot to reach the NCAA tourney, Hollins must get on track.

My take: Yes, don?t judge Ash by his work at Arkansas in 2013. That roster was burned by Bobby Petrino?s horrid recruiting.

If Penn State is going after Vanderbilt commits, it should be open season on PSU's players.

My take: That?s an issue.

Pat Chambers is 6-35 (0-5 this year) in the Big Ten in his third season. Penn State proving it can't win with or without Tim Frazier.

So MSU and Michigan share B1G lead at 4-0. #Badgers and Iowa next at 3-1. Think UW will be jacked for Michigan on Sat?

My take: No doubt.

Crazy how lame the B1G atmospheres can be in football and how wild it can be for hoops. B1G has become a basketball conference!!

Fans get too caught up in titles. Did you know Ed Warinner is OSU's "co" offensive coordinator? Now you do. #Buckeyes

My take: Titles exist to satisfy egos, for the most part.

Minnesota doesn't have a bad loss yet. Michigan and Arkansas both could be in the NCAA tournament. Syracuse and Mich St Final 4 caliber.

My take: Gotta be impressed with Richard Pitino.