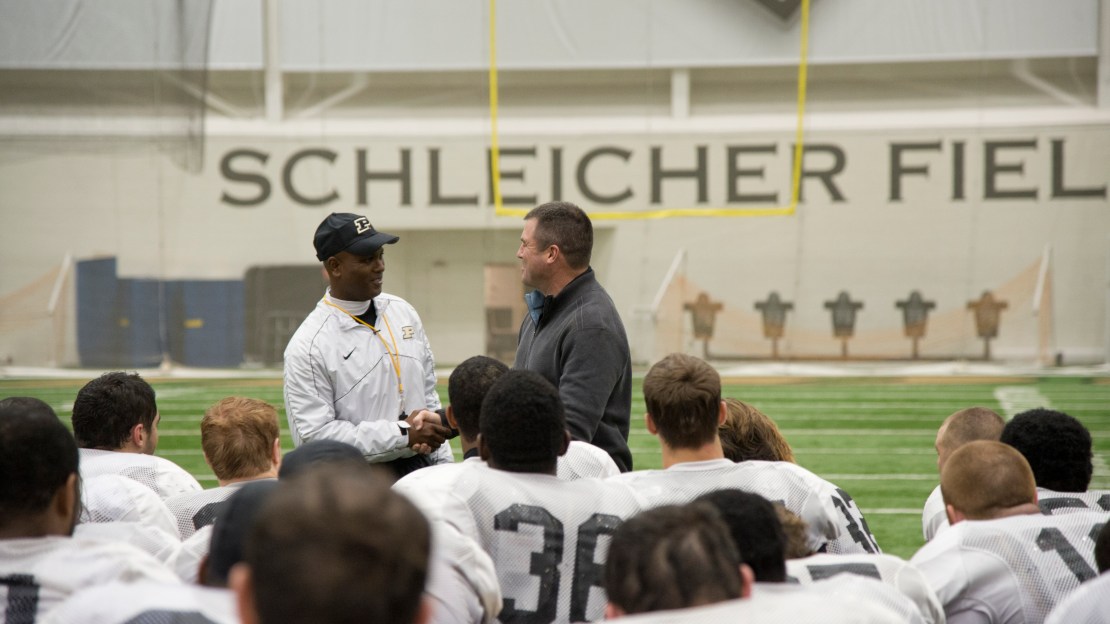 Tonight, the 2014 LiveBIG season continues with the Purdue episode premiere, after the Boilermakers take on the Fighting Illini in Big Ten men?s hoops action.

In November, the Krannert School of Management at Purdue University hosted 27 veterans from 15 states in the school?s fifth National Entrepreneurship Bootcamp for Veterans with Disabilities (EBV) program.

During the week, the veterans are immersed in a rigorous program to help them follow dreams of business ownership. Purdue University alumni, entrepreneurs, faculty, staff and students volunteer to engage with this special group of men and women.

The veterans also had the opportunity to attend a Purdue football practice, after which Coach Darrel Hazell and the players thanked these veterans for their service and dedication to our country. At the end of the residency, the veterans were recognized at Ross-Ade Stadium as part of Purdue?s Military Appreciation Day.

?The message to the football team was one of commitment to each other,? said Goad. ?Commitment is what drives someone to train and work when nobody is watching.  Commitment and trust forms a bond that is needed in any team in order to win or succeed? The bond referenced is not just formed in combat units, it is formed at every level and specialty of the military? When military members leave that environment and go back home to civilian life, that bond is missing.  It is simply something that can?t be put into words.

Goad continued to express the impact that the EBV program had on the veterans.

?The Purdue EBV program created that bond for these men and women again. Although the program was fast, it provided a base of knowledge on the ?what to do? and ?how to? aspects of a startup.  Knowledge leads to a plan, a plan leads to doing, doing leads to confidence and confidence leads to success.  EBV provided a foundation of knowledge that allows the entrepreneurs to know what to do next.?

Purdue University will host the sixth class of Purdue EBV Graduates from October 31 to November 8, 2014.  For more information about the bootcamp?s success stories or to apply to the 2014 program, visit: http://www.krannert.purdue.edu/military/home.asp