Q&A: Gary Harris 'knew it was right' to come back 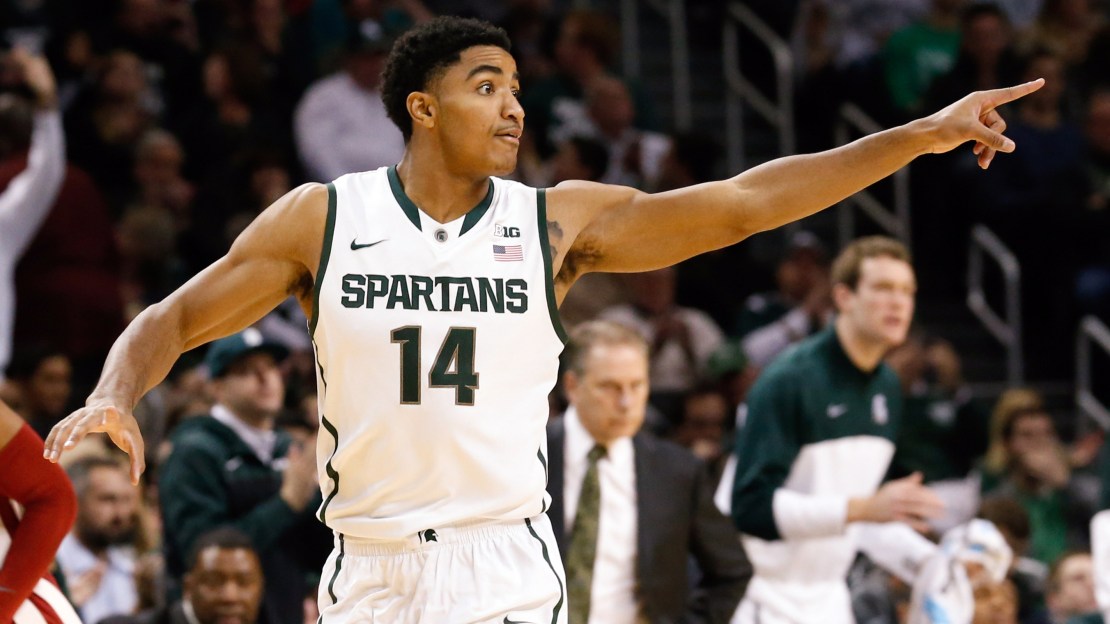 Michigan State?s Gary Harris is one of the Big Ten?s most talented players, a threat off the wing who can score in a variety of ways. But he has been a bit frustrated this season with his shooting. To wit: He missed two free throws in the waning moments of a recent game vs. Minnesota that could have iced victory for Michigan State.

Also, Harris? shooting percentage has dropped from 45.6 percent last season to 40.4. He?s fighting through it for a Spartans team that?s 15-1 overall and atop the Big Ten with a 4-0 record.

Harris arrived in East Lansing as one of the top recruits in the nation. And he debuted by averaging 12.9 points, 2.5 rebounds and 1.4 assists, earning Big Ten Freshman of the Year accolades and second-team All-Big Ten honors. The 6-4 sophomore from Hamilton Southeastern in Fishers, Ind., (just outside of Indianapolis) is taking his game to another level this season. Harris is averaging a team-high 17.8 points while also pulling down 4.5 rebounds and 2.9 assists.

The Spartans play at Northwestern on Wednesday vs. a Wildcats squad coming off a home win vs. Illinois. MSU, which has had to fight through injury and illness issues, can?t afford a loss if it wants to keep pace with Wisconsin and Michigan.

I caught up with Harris as he prepped for the trip to Evanston.

Q: What type of letter grade would you give your season so far?
A: I?d probably say a C-plus.

Q: What is it that you haven?t been satisfied with?
A: My shooting percentage isn?t where I want it to be at. I haven?t been making shots like I know I can make shots. I?m trying to get back on the track I was last year.

Q: Is there a reason why you aren?t shooting as well as you think you should be?
A: No real reason for it. I?m just being guarded a lot differently than last year. Sometimes I feel like I may be forcing my shot or rushing my shots when I should just be shooting it like I normally do.

Q: So you are saying that you?re a marked man?
A: I guess you could say that.

Q: Has there been one player or team that has frustrated you the most?
A: Not one particular team or player. But in the Big Ten, everyone has you scouted pretty well. I can tell the difference between the Big Ten scouting and the non-conference scouting.

Q: How close did you come to leaving for the NBA after last season?
A: I was close. I sat down and made a decision with my parents because I didn?t know what I was going to do. But once I talked to my parents and Coach Izzo and I thought about it, I knew it was right for me to come back.

Q: Who is the leader of your team?
A: We look to our seniors to be leaders, Keith Appling and Adreian Payne. I feel like we are all playing for them. We want to send the seniors out on the right note.

Q: Who is the most underrated player on the team?
A: We have a lot of under-the-radar players. Denzel (Valentine) does a lot for us offensively and defensively. Alex Gauna does a good job of talking on defense. The freshmen have played some key minutes. Kenny Kaminski has hit some key shots. Due to our injuries, people have had to step up. We are still getting wins, and that?s all that matters.

Q: How crazy were the last two games for you guys?
A: Pretty crazy with back-to-back overtime games. I should have hit those two free throws against Minnesota and we wouldn?t have even of had to go to overtime. You live and learn. We learned a lot from the games and know what we need to do.  We know we can bear down if that?s what we need to do.

Q: Had you ever been in that situation late in a game when you made or missed key throws?
A: I usually knock those down. I was kinda in shock when I missed those. It was disappointing. But, you have to keep playing.

Q: You played prep basketball with Nebraska defensive end Randy Gregory. What type of hoopster was he?
A: He was a monster. He was our big man. We?d just throw it up to him and he?d get it and dunk it. He was a beast offensively and defensively.

Q: I hear you were a great high school football player. Could you have played in the Big Ten?
A: I think I could have played. Football was my first love. It?s what I started to play first. I?ll always have a love for it.

Q: Any other coach you?d have liked to play for in the Big Ten?
A: I got recruited by a few, Tom Crean, Thad Matta, Matt Painter, most of them. There are a lot of great ones. Any of them would have been great.

Q: Your mom (Joy Holmes) was a great basketball player at Purdue from 1988-91. How hard was it to say ?no? to the Boilermakers?
A: It?s tough. Both my parents went to Purdue. I was an in-state kid. It seemed like a perfect story to stay in-state and play at my parent?s school, but I made the decision that was best for me.

Q: How long did it take for you to finally beat your mom in one-on-one?
A: She played when I was younger. But when I got to seventh, eighth grade, she stopped playing. She wouldn?t play me one-on-one.

Q: Where does this season end for you guys?
A: Ideally, with Big Ten and national championships. That?s our goal. We just have to keep striving for it each day.