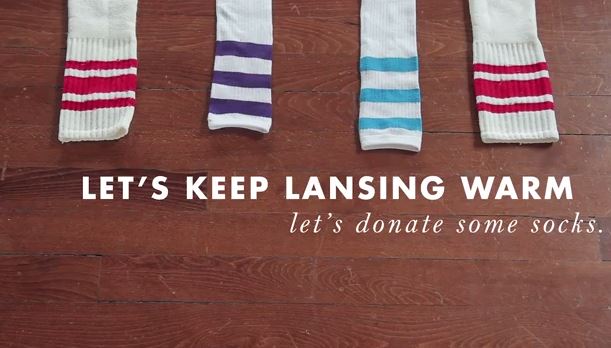 Look down at your feet. Are you wearing socks? Well, imagine what it would be like if you didn?t have access to any - none.

That?s the cold reality for some of the parents and children who arrive at the City Rescue Mission of Lansing, Mich., when domestic or financial troubles force them to seek a safe place.

Thanks to the Socks For Lansing campaign, many needing something as basic as a pair of socks will have warmer feet in 2014.

Sarah Garner, after taking a break from her computer one late September day, saw the local shelter, and with the support of her Lansing-based employer, Rizzi Designs, decided to lend a hand.

?I felt a draw to see how I could help,? she said. ?So I emailed its executive director [Mark Criss], who is awesome - he got back to me right away. He said, ?One of our greatest needs is socks.? I was surprised, but I said, ?Let?s get to it.??

And she did. Her boss, Michigan State University alum Rochelle Rizzi, agreed instantly to make it a company project.

Jennifer Berggren, a MSU student and videographer, who works at Rizzi, joined Garner one Saturday morning to make a short video playing on the charm of this worthy cause.

?We each brought in our closet full of socks [for the video],? Garner said. ?I stole socks from my sister too, and we were just laughing - just filming socks. It seems silly, but this is the whole message of the campaign: it seems like a small thing, but warm socks are something that can really brighten someone?s day.?

Socks began to collect in a box at the Rizzi Designs office and at the company?s event venue, Old Town Marquee. Garner hit an outlet mall to supplement the growing collection, but she still worried about the results. ?One pair is better than zero pairs - but then we counted, and it was more than 600 pairs of socks! We were shocked. It must have been the Black Friday sales or something, but we decided to extend it two more weeks.?

The MSU student radio station, Impact 89 FM, got on board with promotional spots. The Lansing State Journal ran a story. Nearly 400 more pairs showed up in the next two weeks. The City Rescue Mission was overjoyed, and Garner says next year?s drive will begin earlier. The pieces are already in place.

What are some of her most vivid memories? Well, socks. ?I was amazed at how nice the socks were that people bought. Nice wool socks, Carhartt socks - the people of Lansing were wonderful. They were constantly commenting and liking our Facebook page.?

The campaign was a big, warm success. They collected nearly 1,000 pairs of socks in a matter of several weeks - and now are intent on topping that number next year.

And it all started with a study break.

For more information about this great initiative, go to http://socksforlansing.com