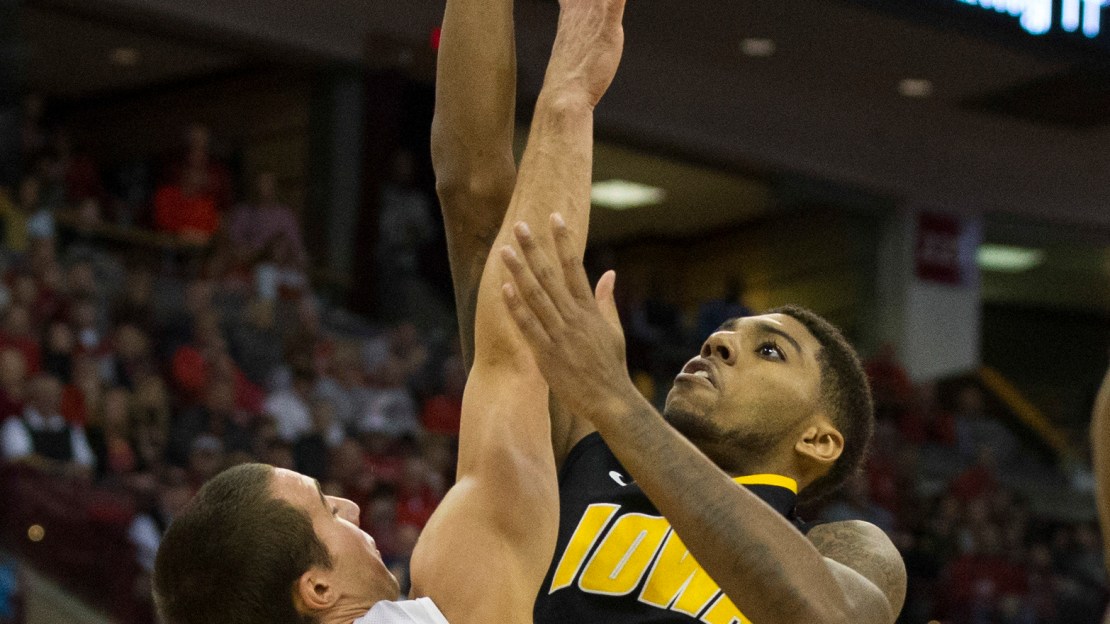 In case any doubters remained-Iowa is for real, as proven by its 10-point win in Columbus. Granted, this was probably more like a six- or eight-point win if Ohio State isn?t fouling desperately at the end. But that?s splitting hairs, especially because most teams in that position do the same thing.

Frankly, if you?re looking for reasons to call this result a fluke, you might be looking for a while. Iowa wasn?t red-hot from the outside (29 percent on 3s), Ohio State wasn?t atrocious at the free-throw line (71 percent), and both teams shot roughly the same number of free throws.

Despite all that, Iowa posted the best points-per-possession figure on the Buckeyes since last February, when Wisconsin whooped OSU in Madison. That?s a full 329 days, for those counting at home. I tend to think that Iowa just happened to play really well, but if you?re inclined to believe that every outcome needs a story, you?re not alone.

Not only does this win put Iowa on the map nationally, but it also changes the Big Ten conference race calculus significantly. Wisconsin now has solid inside position on the title, as Pomeroy is currently projecting a 2-game margin for the Badgers. Iowa now looks like it?s at or near the top of the heap for the rest of the conference (show of hands-who had Wisconsin and Iowa as 1-2 in the standings?).

Ohio State is still a strong team, of course, and this result does not change very much for the Buckeyes. This is still a defensively dominant team whose middling offense holds it back. Aaron Craft gave a great line to the haters, with a devilish 6 points, 6 assists, and 6 turnovers (in 6-squared minutes…spooky). And if the college game allowed for it, he might have picked up 6 fouls, but alas, he was sent to the bench after his 5th. Roy Devyn Marble played like a 1st-teamer with 22 points (13 shots), 4 rebounds, 3 assists (3 turnovers), 2 blocks, and 3 steals. He was the best guard on the floor on Sunday, and it wasn?t close (I?m still in disbelief that the NBA might not be interested in a 6-6 point guard that can score, shoot, and play defense).

The middle of the conference continues to look like a collection of NIT teams. Illinois had a particularly bad weekend, falling to hapless Northwestern. Illinois? offense was putrid, as it managed just 0.74 points per possession, the lowest mark in Groce?s tenure. There were a myriad of reasons for Illinois? poor output, but I think some credit has to go to Chris Collins. Against Illinois? ball-screen heavy offense, Northwestern opted to have its defense do what?s known as a ?soft show,? where the screener?s defender (usually Alex Olah) hangs back behind the screen to cut off any easy driving lane while the other defender works around the screen.

The idea behind the soft show is to have the screener?s defender guard two guys at once, and it works if the ballhandler does not take decisive action to exploit the situation before the other defender recovers. Basically, it relies on the ballhandler not being able to make quick and intelligent decisions. And last night, that was frequently where Illinois found itself. Seeing how well this worked, I?ll be surprised if Illinois isn?t fed a steady diet of this defense moving forward.

Of course, Northwestern provided its own scouting material as well. With the Illini in desperation mode, Northwestern couldn?t get the ball past half court against Illinois? press. Obviously, this is the area where Dave Sobolewski?s absence (he was out with a concussion) hurt. But Northwestern looked so bad against full-court pressure that I?m sure the Wildcats can expect to see a steady diet of it-Sobolewski or no Sobolewski.

While Northwestern ensured it won?t have to suffer a winless Big Ten season, Illinois now finds itself in quite the hole for an at-large bid. Groce?s team probably needs to another seven Big Ten wins to get on the right side of the bubble, and the team only has seven home games remaining. And four of those come against Wisconsin, Iowa, Ohio State, and Michigan State.

A trip to State College was just what the doctor ordered to cure Indiana?s offensive woes. The Nittany Lions, after all, currently sport the Big Ten?s worst defense, and they were gracious hosts in that regard, allowing Indiana to score roughly 1.2 points per possession in a three-point home loss. Penn State is now 1-4 in games decided by five points or fewer, which might be partially explained by the tendency of its stars-Tim Frazier and D.J. Newbill-to foul out in the final minutes. Both players are averaging a little over 3 fouls per 40 minutes, which figures to increase as we get deeper into conference play.

The hackstastic behavior is especially concerning because both players are senior guards, and neither one of them is a top-level defender. For example, Newbill has committed 49 fouls this season, but has a mere 14 steals and 6 blocks to show for all that aggressive defense.

Frankly, this might be emblematic of the Chambers Era than any shortcomings for these particular players: 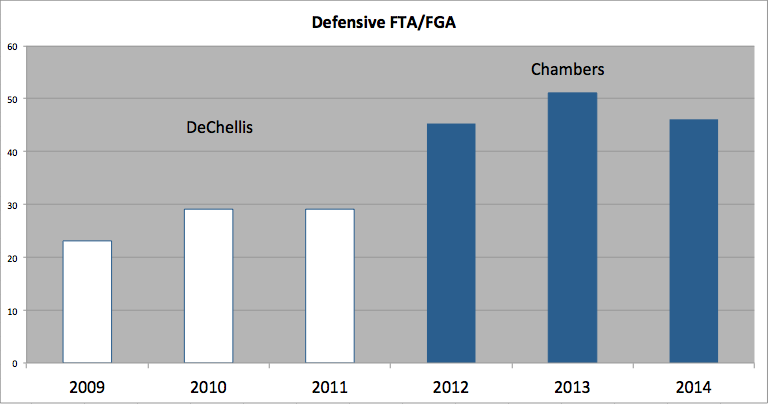 Now in the third year of Chambers? tenure, it?s probably safe to assume that the fouling is here to stay. That?s not always a bad thing-a lot of fouls are sometimes a byproduct of an aggressive defense that forces a lot of turnovers, for example. Every year, Virginia Commonwealth fouls quite liberally in search of turnovers. Wright State had the best defense in the Horizon last year despite ranking next-to-last in terms of giving the opponent free throw attempts.

But the numbers don?t suggest that Penn State?s defense is any better for all the extra aggression. PSU ranked 10th and 11th in defensive efficiency in conference play the past two seasons, and right now the team ranks as the worst defensive team in the Big Ten. And a big reason for that are all the free points this defense is handing to opponents. The Hoosiers, I?m sure, were more than happy to take advantage of the 35 free-throw attempts on Saturday. Considering Indiana only shot 38 two-pointers, that?s all too many freebies. Newbill and Frazier might be tough to contain offensively, but Penn State?s defense puts a lot of pressure on the offense to put up big numbers every night.

Speaking of pressure, Minnesota wilted once again down the stretch, this time missing an opportunity for a great road win by losing to Michigan State. Some hot outside shooting gave the Gophers a 10-point lead early in the second half, but once the shooting cooled off, the Spartans showed why they?re the better team. Still, there was an opportunity for Minnesota after Michigan State blew a 5-point lead in the final 13 seconds. But overtime was a disaster, as Minnesota was outscored 16-4.

Not to pile on, but this really was an outstanding opportunity. Adreian Payne was out with an injury (which certainly impacted Michigan State?s ability to win, it didn?t change the RPI implications of the game), and the Gophers got a 5-10 from three night from Malik Smith. Payne?s absence really hurt MSU?s interior scoring (45 percent on 2s), but the Spartans were able to overcome that thanks to making 32 of their 40 (!!!) free-throw attempts.

This loss is concerning because Minnesota just doesn?t seem to execute well at the end of games. While the Gophers pulled out a tight win over Penn State this past week, that was largely thanks to PSU being without its backcourt for the final couple of minutes. But the Gophers blew a lead against Michigan, nearly choked away a double-digit lead late against Purdue, and couldn?t put up any kind of resistance against Michigan State in overtime.

Now, don?t get me wrong-I?m firmly in the camp of ?this is mostly luck.? If Michigan State shoots its season average on free throws (71 percent) in this game,  Minnesota wins. Even late in the game, random bounces probably have a bigger effect than they?re given credit for (which seems to be ?zero?). But if this trend keeps up, I might have to reconsider that position.

The early game on Sunday featured the frustrating version of Purdue, though the team was at home against an ice-cold Nebraska (4 for 16 from 3), so it worked out for the Boilers. Matt Painter continues to play a 10-11 man rotation, much to the wonderment of many Purdue fans. To some extent though, this is driven by the fact that A.J. Hammons can?t keep his hands to himself. Once again, he was the best player on the floor when he was in the game (18 points, 9 shots, 4 blocks). But that was only 22 minutes, because he also picked up 4 fouls.

This was an exciting weekend, but I haven?t even gotten to the biggest news yet-Walter Pitchford committed his second turnover of the year, right on the heels of his first committed on Thursday. Someone tell @CoachMiles to get this reckless over-dribbler under control.