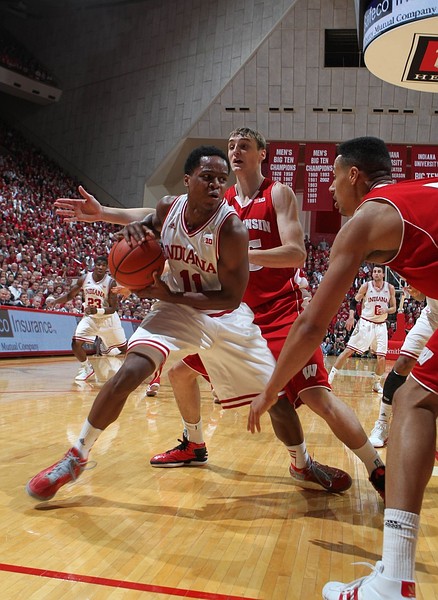 It?s time to begin Week Three of the Big Ten season. Michigan State, Wisconsin and Michigan are unbeaten in conference play, while Iowa is coming on. And you know Ohio State will dig in after suffering back-to-back losses. There are no Titanic clashes but some that will go a long way toward shaping this Big Ten race.

GAME OF THE WEEK: Wisconsin at Indiana, Tuesday. It?s difficult to win in Bloomington. Yes, Michigan State already has done it this season. Still, this figures to be one of the Badgers? most stern tests to its run of perfection. If the Hoosiers can limit turnovers, control the boards and shoot well from long range – yes, that's a lot of "ifs" – they have a chance to pull out a signature victory. The Badgers are playing well on both ends of the court. Wisconsin is the only Big Ten school Tom Crean hasn?t beaten during his tenure in Bloomington (0-10). He and Bo Ryan are rivals from Crean?s days at Marquette. Ryan is 18-3 against Indiana and 14-3 against Crean.

DON?T OVERLOOK THIS GAME: Michigan State at Illinois, Saturday. The Fighting Illini are still a work-in-progress. The defeat at Wisconsin was brutal. The loss at Northwestern was disastrous. But Illinois is tough at home. Just ask Indiana, which already has fallen in Champaign. And the Illini are desperate to get back on track after consecutive defeats. Is Illinois a tourney team? Largely because of injury and illness, the Spartans have been a study in maddening inconsistency this season. Be careful, Sparty. This should be a fun game that goes down to the wire-which is just how MSU likes it.

MUST WIN: The Big Ten?s lone unbeaten, Wisconsin needs to take care of Michigan when the Wolverines visit on Saturday. The Wolverines haven?t gone off the rails without Mitch McGary, who is out indefinitely after undergoing back surgery. Freshmen Derrick Walton Jr., and Zak Irvin have been coming on. And, well, Glenn Robinson III and Nik Stauskas continue to excel and take their game to another level. Jon Horford and Jordan Morgan have more than held their own on the interior, which has been a big help. The Wolverines already have won at Minnesota and at Nebraska. Winning in the Kohl Center would be on an entirely different level. Still, the Badgers need to be careful and beware the Wolverines, who are playing well.

BEST INDIVIDUAL MATCHUP: There are some interesting choices, but I?ll be watching Ohio State?s Aaron Craft and Minnesota?s Andre Hollins. Craft?s reputation as the Big Ten?s primo defender is well-established. Hollins is one of the Big Ten?s top offensive players. If he?s able to work unfettered, the Gophers may be able to pull the upset. Remember: Minnesota came close to dumping Michigan at home in its Big Ten opener and lost in overtime at Michigan State on Saturday. And Ohio State is reeling, coming off back-to-back losses at Michigan State and at home to Iowa.

UPSET ALERT: Ohio State at Minnesota, Thursday. See above. This is a dangerous game for the Buckeyes, who play excellent defense but don?t seem to know from game to game who will be their top offensive performer. Who is the go-to guy? LaQuinton Ross looks like the guy, but he?s inconsistent. Ohio State has the edge inside with its skilled big men like Amir Williams and Trey McDonald. And they may have to be the difference in OSU wants to stave off a good Minnesota team in the venerable Barn, where the Gophers almost dumped Michigan in the Big Ten opener.

BIG WEEK: Minnesota. On Thursday, the Golden Gophers play host to Ohio State. On Sunday, Minnesota plays at Iowa. Richard Pitino?s Minnesota club has been one of the Big Ten?s pleasant surprises, forging a 13-4 overall mark and 2-2 Big Ten record. And the Gophers could be 4-0 in the Big Ten, as the losses were 63-60 at home to Michigan at 87-75 at Michigan State in overtime. This week offers a chance for the Gophers to build a NCAA-worthy resume. If Minnesota somehow could get a split, it would be huge.

BIG WINNER: Michigan State. The Spartans won two wild games. On Tuesday, they blew a 17-point second-half lead and had to go overtime to beat Ohio State at home, 72-68. On Saturday, MSU overcame a double-digit hole at home in the second half, blew a late lead in regulation and then finally beat Minnesota in overtime in East Lansing, 87-75. It was a heart-stopping week for Michigan State fans. But, their team is 15-1 overall and 4-0 in the Big Ten. Now, MSU just needs to get healthy.

BIG LOSER: Illinois. Remember when the Fighting Illini opened Big Ten action 2-0 with home wins vs. Indiana (in overtime) and Penn State? Yes, seems like 100 years ago. That?s what consecutive bad losses will do to a team. First, Illinois got clobbered, 95-70, at Wisconsin on Tuesday. Then, the Illini lost 49-43 on Sunday at Northwestern to a Wildcats squad that may be the worst in the Big Ten. Rayvonte Rice needs to regain his form for a team that?s struggling to shoot and rebound.