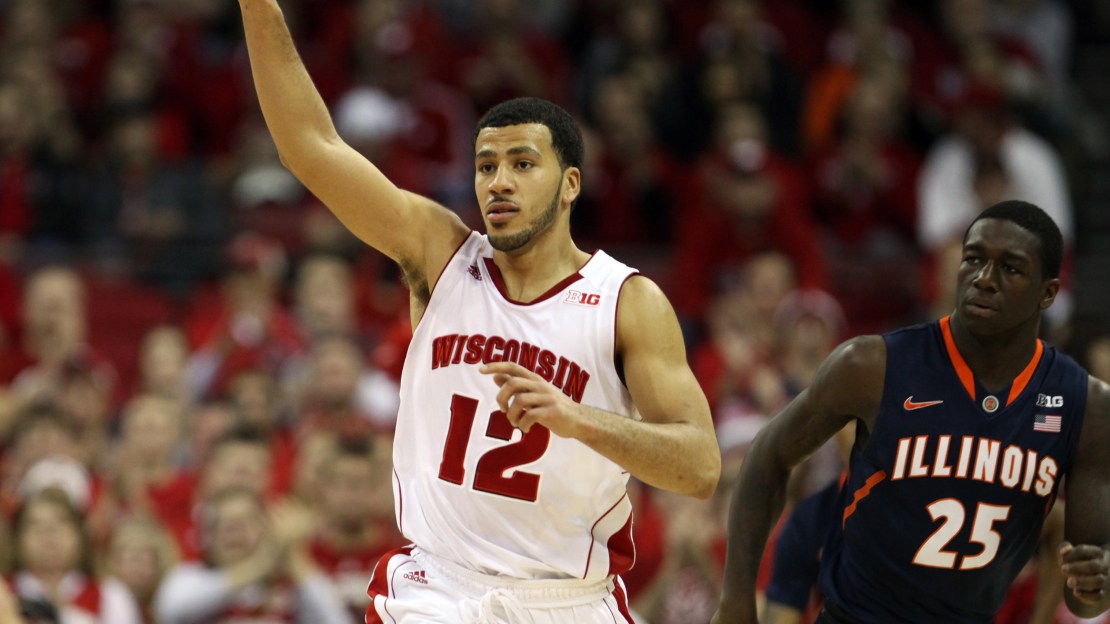 We are in the second week of January, which means that the college basketball season is officially at the midway point. Through two months, Wisconsin is the only Big Ten team without a loss this season, sitting at a perfect 16-0. The Badgers are joined by Michigan State and Michigan as the only three teams without a conference loss.

So, what do all of these teams have in common outside of impressive win-loss records? Exceptional starting lineups.

This list ranks all 12 starting fives in the Big Ten, counting down from 12-to-1.

[ MORE: Bardo: Most surprising players in the Big Ten ]

Drew Crawford is one of the top players in the conference, but the Wildcats don't have a ton of talent outside of the 6-5 senior forward. Sobolewski is a solid floor general, but his shooting has been nothing short of atrocious this season, sporting a 26 percent clip from the floor. Cobb is the only other starter, outside of Crawford, who averages double-digit points for this Northwestern team. Chris Collins has his work cut out for him in Evanston this season.

This is a starting five that will likely improve as the season progresses. Gallegos is the only senior in this lineup and you can tell from watching this team that they lack discipline and experience. Petteway is a budding star, ranking sixth in the Big Ten with a 17.2 point per game clip.  Tim Miles is a good coach who loves his team, and that makes me believe this group will only continue to get better with time.

Frazier and Newbill form one of the top backcourts in the country, but the lack of size and production from this Penn State frontcourt has been an issue this season. Travis is a solid contributor, averaging more than 11 points and eight rebounds per game, but he is often the biggest player on the court for the Nittany Lions, standing at 6-7, 225 pounds. This is a team that could surprise some people come March, especially if Frazier and Newbill are hitting their shots. A solid big man could make Penn State a tournament-caliber team, but that just isn't the case. At least not this season.

Purdue comes in here at No. 9 on the list, but the Boilermakers are off to an impressive 11-5 start this season. That tells me two things: This team is overachieving with the talent they have, and more importantly, Matt Painter is an outstanding coach. Ronnie and Terone Johnson are terrific, and Smotherman is one of the most exciting, young players in the Big Ten. A.J. Hammons is the one player in this lineup who doesn't always play up to this potential. If this kid could put it all together and develop more consistency in his game, this is a NCAA Tournament-caliber team.

This Indiana team is loaded with talent and is one of, if not the most exciting team to watch in the Big Ten. However, youth and inexperience is the reason the Hoosiers aren't higher up on this list. Sheehey is the only upperclassmen in this lineup, which means these youngsters are going to have to grow up quick if this is going to be a tournament team. Vonleh is hands down the most dominant freshman in the conference, and Ferrell has done an outstanding job of taking on more of a scoring role this season. The potential is there with this group, but can they put it all together come March?

At the start of the season, I would have put this starting five towards the bottom of this list, but just about everyone in this starting five has over-achieved as of late, especially Rice and Ekey. Rice, a transfer from Drake, has been exceptional this season, leading the Big Ten in scoring with an 18.8 ppg clip. There are two big questions that stand out with this staring five: Can they find a second scoring option, and perhaps even more important, can they find a consistent presence down low. That was more than evident in Illinois' loss to Northwestern on Sunday night. Those two things need to improve if John Groce's team is going to compete in the Big Ten this season.

This was a top 10 team heading into the season, but injuries, inconsistent play from the point guard position and a rough nonconference schedule have led to a tough start for the reigning national runner-up. Yes, Michigan is 3-0 in Big Ten play, but its opponents own a combined 3-9 conference clip and two of the wins came by three points or less. Losing Mitch McGary for the season was a tough blow for this team, however people often forget that Morgan was the starting center for most of last season. Stauskas has been outstanding this season and Robinson III has played better as of late, scoring 17-plus points in five of his last seven games. Consistency is key for this team, especially with Robinson III and freshman point guard Derrick Walton Jr. That will ultimately make or break this team's NCAA Tournament hopes come March.

Richard Pitino gets my vote for Big Ten Coach of the Year right now, and that's saying something considering how impressive Bo Ryan's Wisconsin team has been. The Gophers are off to a 13-4 start, with two of those losses coming to Michigan by three points and at Michigan State in overtime. The Gophers' three-headed monster in the backcourt of Mathieu, Andre Hollins and Austin Hollins has been nothing short of outstanding. Pitino said earlier in the year that he is "a few power forwards away" from having a great team. That statement could not have been more spot-on. Eliason has been one of the most improved players in the Big Ten this season, which is why I put the Gophers' starting five this high up on the list.

This Buckeyes starting five is solid from top to bottom, but the question still remains: Where is the offense going to come from? The Buckeyes have had seven different players lead them in scoring this season, including each member of the starting five. Both Ross and Williams need to be more consistent scorers if this team is going to make a tournament run. Craft is one of the toughest players in the country, but the Buckeyes need more then that if this is going to be a Final Four-caliber team.

If we're talking about the deepest teams in the Big Ten, Iowa takes the cake, no questions asked. But even so, this starting lineup is nothing to frown upon. The Hawkeyes have an NBA-sized starting lineup, with four of the five members of this starting five standing at 6-6 or taller. Marble is one of the top players in the Big Ten, and Aaron White gets my vote for the most underrated player not only in the conference, but maybe the entire country. The incredible thing about Fran McCaffery's team is that you could swap out these five for the next five players on the bench, and they would still rank among the best starting lineups in the Big Ten.

When healthy, this is one of the best starting lineups in the nation. But health has been a major concern for Tom Izzo's club early on this season. In fact, this starting lineup has been intact for just five games this season. Harris is the most dynamic scorer in the Big Ten and Payne is the top big man in the conference. Appling has been outstanding this season, outplaying both Craft and Frazier as the top floor general in the Big Ten right now. Dawson is the key to whether or not this team is a legitimate national championship contender. If this team can get healthy and get consistent play from Dawson, this could be a magical year in East Lansing.

If there could be a tie at the top, it would be between Michigan State and Wisconsin. But since no one likes ties, I gave a slight, slight edge to Wisconsin based on how steady this Badger starting five has been this season. They have an outstanding scorer in Dekker, a lockdown defender in Gasser, a floor general in Jackson, an elite outside shooter in Brust and a legitimate big man in Kaminsky. In other words, there is nothing this Wisconsin starting five doesn't have.