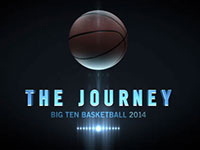 When Chris Collins took the job at Northwestern, he was aware of the overall perception of the basketball program. "I'm taking over a program that's been right on the cusp," Collins said. "They just haven't been quite able to get over the hump."

Collins is one of several featured stories on "The Journey: Big Ten Basketball 2014," which debuts at 9:30 p.m. ET Sunday.

Don?t forget that all basketball season you can also watch past episodes of our show at BTN2Go - another great reason to download the free BTN2Go app.

Our show's crew also provides behind-the-scenes photos and video via @BTNJourney as well as on Facebook and Instagram. They'll follow all o the teams right up through the tournament.

Now, here are some more bonus clips ahead of Sunday night's show, including this one on Chris Collins' deep basketball roots. His father also chimes in on what Chris has learned being around basketball.

In this next clip, Doug?s Collins describes his first head coaching job was with the Bulls at the start of the 1986-87 season with a young Michael Jordan.

Chris Collins was a ball boy for the Bulls when his father coached the team. Chris reminisces about that time at the old Chicago Stadium and the routine he and his father had after victories.