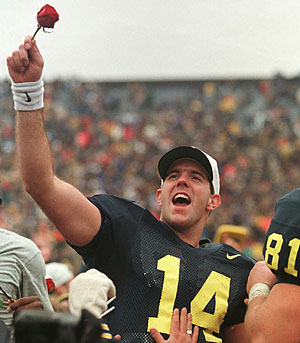 As a 21-year-old quarterback at Michigan, Brian Griese was on top of the world after leading the Wolverines to their first national championship in 49 years.

But on the inside, Griese was hurting. Nine years before playing at college football?s highest level, Griese lost his mother to cancer.

Midway through his NFL career, Griese started Judi?s House, a bereavement support community that helps children and families cope with the death of a loved one. His goal was to provide support so that kids didn?t have to bottle up the emotions like he did for so many years.

Judi?s House is based in Denver, Colo., where Griese spent the first five years of his NFL career. It offers grief counseling and support groups while operating with the vision that no child should ever have to feel alone in loss.

The staff of Judi?s House is made up of grief counselors, interns, volunteers and donors who create a warm and inviting setting to encourage children to share their emotions with other children. That is unique, says the center, because our grief avoidant society doesn?t recognize the impact of grief on children and teenagers.

According to the National Alliance for Grieving Children, many children feel like they are the only person who has experienced the death of someone in their life, even though there might be other friends experiencing similar circumstances. It is helpful to children when the adults in their lives provide opportunities to acknowledge the grief everyone is feeling. It is also helpful when children are able to gather with peers grieving similar situations.

Griese suffered losses on the gridiron throughout his career at Michigan and 11 seasons in the NFL, but the loss of his mother was understandably the one that hurt the most. Judi?s House is his way of helping other children learn to deal with their grief in a healthy way.

Judi?s House doesn?t charge families for using its counseling services or participating in the programs, though it does accept donations. As a registered 501c3 organization, it relies on private contributions to fund its programs.

For more information about donating, volunteering, or participating in their programs, visit their website at http://www.judishouse.org