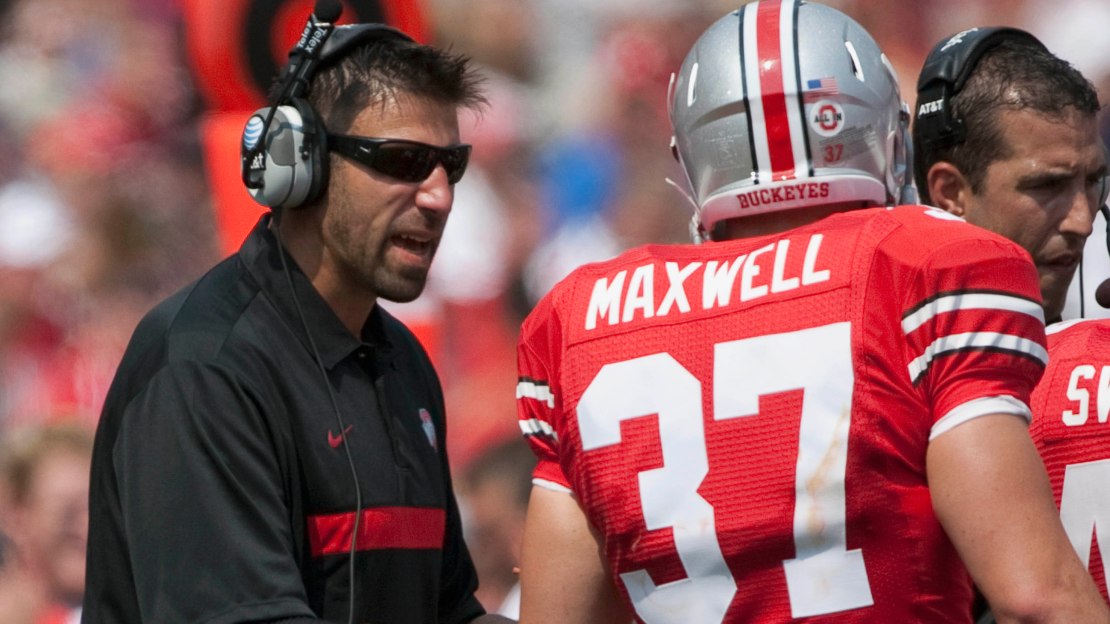 There has been a lot going on at Ohio State. Defensive line coach Mike Vrabel is bolting to work on Bill O?Brien?s staff with the Houston Texans. Tough blow. By all accounts, Meyer like Vrabel?s work with the line, which was one of the few bright spots on the maligned Buckeyes defense last season.

No doubt, the loss of Vrabel is a big one. He was one of the staff?s best coaches. The guy may one day be a head coach.

And then there was news that quarterback Braxton Miller is going to return for his senior season. No shocker. Miller still has much to prove working in the pocket as a passer, which is a must in the NFL.

The James Franklin watch continues at Penn State, as reports stream in that he?ll be the next head coach. Guess that shows how the Nittany Lions? gig has become more attractive in just two short seasons. Pretty amazing revival.

And who will be Franklin?s biggest initial recruit? That would be boffo d-line coach Larry Johnson.

Some wonder why the hiring process is taking so long. The great David Jones of Pennlive.com explains.

Jones? best guess: There will be a formal introduction of Franklin sometime Saturday at the earliest and possibly not until later. An announcement could be made before then, however. Yes, there is a chance Vandy could make one last hard push to keep Franklin, but it still likely won?t be enough.

Anyone who watched the wondrous Michigan State-Ohio State game on Tuesday saw how, um, fired up Tom Izzo got. Yes, ?fired up.? Did he get too ?fired up??

?I had people all over me because I was upset about it,? Izzo said. ?Personally, I don?t care. Not to be a jerk or anything, but I know my team and I know expectations are higher by all of you, but they aren?t as high as mine are — and all those fans that say I?m a little too hard on them and this and that, more is expected. I just know over the years, I know what it takes to win. I know when there?s things that aren?t done.?

More love for this Wisconsin Badger team that I like so much. This time it?s the great Tom Oates of Madison.com sharing his glowing commentary on this fabo Badger club.

What is it that Oates likes about the club he covers? Its versatility. Me, too. I also love the guard: Trae Jackson; Ben Brust; Josh Gasser. Only one UW team has had a longer in-season winning streak - the 17 in a row by Ryan?s 2006-07 team is next on the Badgers? hit list - but that came in the middle of the season and didn?t raise expectations as quickly as the current streak has.

Look, many are on record about their affinity for this Iowa hoop team.  I am. There?s a lot to like. The Hawkeyes smoked Northwestern last night. But, Iowa needs a good road win to really show it?s legit, right? Right.

The Hawkeyes will have a chance with a game at Ohio State on Sunday. Whatcha got, Herky?

It was Derrick Walton Jr., the same freshman who saw his minutes slump down to 14 against Arizona and 21 against Stanford less than a month ago.

?For him to do that here, that will give him confidence that he can do it just about anywhere in the Big Ten,? Stauskas said of a sold out, pulse-thumping night at Pinnacle Bank Arena.

Petteway: "We lost by 1 to Michigan, but it still hurts. It?s not a good feeling. I don?t want to lose to nobody. We should?ve won the game"

My take: Tough loss to Michigan for Nebraska to swallow.

Every time I watch Michigan I'm impressed by Levert. Long, athletic and explosive going to the hoop.

My take: The guy is a lithe athlete.

Will be interesting to see what Meyer does with his two vacancies on the defensive staff. Lost two good recruiters, particularly Vrabel.

My take: A chance to remake the staff. It will be interesting to see what Meyer does.

I fully expect one of the new coaches Meyer brings in will have the title of "defensive coordinator" (no "co") and will call the shots.

U-M can post a 4-0 start in Big Ten for the first time since 2003 with a win over Penn State next Tuesday at Crisler Center.

My take: That?s too long between 4-0 starts.

Two road wins in Big Ten for Michigan are huge. Playing with purpose in McGary's absence, 3-0 in conf.

Tim Miles is going to answer ESPN questions via Twitter at halftime.

My take: Amazing a coach would do this.

Even after Penn State introduces James Franklin as coach Satufday. I expect Vanderbilt AD David Williams to still be disputing it.

Travis Trice nowhere to be seen at MSU practice. Izzo unsure about him for Saturday. Payne, no practice, "very questionable."

My take: Looks like neither will play vs. Minnesota.