Dienhart: What does new OC mean for Michigan? 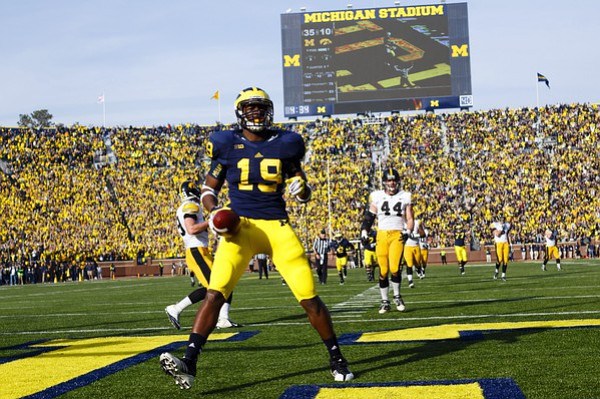 It looks like Michigan already has hired a new offensive coordinator, as reports indicate Brady Hoke has tabbed Alabama?s Doug Nussmeier. That didn?t take long. Actually, it obviously likely has been in the works for a bit. The chair in deposed coordinator Al Borges? office is still warm. Heck, pictures of his kids may still be on his desk.

As I said in my analysis of Borges? firing yesterday, Michigan?s next offensive coordinator wasn?t going to be a radical hire. Hoke wasn?t going to bring in a guy who had one of those whacky go-go offenses that was going to be widely divergent from Borges? largely West Coast system. Nussmeier?s hire is proof of that.

When you think of Alabama, you think of many things. ?Cutting-edge offense? isn?t one of them. The Crimson Tide?s attack is as wild and crazy as a pair of your grandpa?s wing tips. The Tide offense is from a black-and-white era when men wore skinny ties and crew cuts and drank martinis at lunch.

A pass on third-and-3? Crazy, man. Crazy. Hand off left ? hand off right ? hand of up the middle is more like it. In fact, it's the Holy Trinity in Tuscaloosa.

Sure, Nussmeier was doing what he was told by Saban. Nussmeier brings a nice resume to Ann Arbor that includes pushing the buttons on some fancy passing attacks.

The former NFL quarterback has worked in the CFL and NFL with the Rams, where he coached signal-callers. He also has been a coordinator in the college ranks with Fresno State and Washington, in addition to pushing the buttons on Saban?s attack the last two seasons. Working with Saban can be, uh, demanding. I?m guessing Nussmeier?s two seasons probably seemed like 10 and he felt it was time to spread his wings. Why else would you leave the best program in college football to jump on this Michigan ship? Exactly. Is this even a lateral move for Nussmeier?

And you know Nussmeier will be paid a fat wad of cash for his services. Borges was the highest paid Big Ten offensive coordinator and ninth-highest paid assistant in the nation last season with a salary of $700,000. See the list right here.

Nussmeier was the No. 12 paid assistant in America with a $680,000 salary. You know he?s getting a raise to move and to walk into a situation that isn't exactly stable, as Hoke likely faces a win-big-or-else season in 2014.

Regardless, let's move on. …

Nussmeier, 43, has Big Ten experience, too, coaching quarterbacks at Michigan State from 2003-05 under John L. Smith (yes, THAT John L. Smith), whose offense could be ? colorful, just like John L.

So, there?s a lot to like about Nussmeier, who he did a nice job developing A.J. McCarron at Alabama. That has to pump up Devin Gardner and Shane Morris. No doubt the arrival of Nussmeier will excite Michigan fans. And that's what this is about, people. But, he?s not bringing a philosophy that?s gonna shake up the Big Ten with a scheme that?s like Clemson, Oregon, Texas Tech or Auburn.

Never mind. I don?t want to ruin it for you.

As I said before, the Michigan offense figured to improve in 2014 based solely on many young players continuing to mature and develop. Was Borges stubborn? Could he have done some things differently? Yes and yes. But this change at coordinator was made more to appease a restless fan base than to shake up the Michigan offensive philosophy.

Nussmeier will have his unique wrinkles and what-not. But I?m guessing the Wolverine attack basically will be built around running the ball. And, if the numbers and win totals increase in 2014, Nussmeier will be hailed as a ?genius? and may race off to be a head coach somewhere. And Hoke will be lauded as a forward-thinker who took bold, swift action to save his program by canning Borges and grabbing Nussmeier from college football?s ?it? program.

It's a great storyline, isn't it?  I can?t wait to look back on this hire in a year.