Rayvonte Rice: 'I am fortunate to be here' 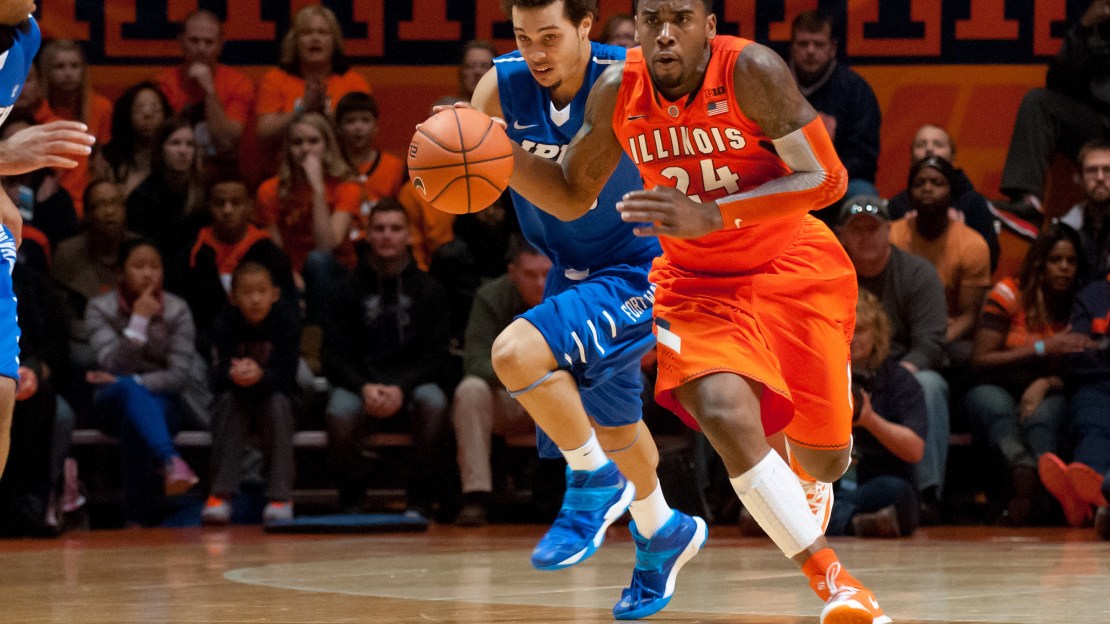 No Big Ten newcomer has had a bigger impact than Illinois guard Rayvonte Rice, the Big Ten's leading scorer. And that?s a big reason why the Fighting Illini have been one of the Big Ten?s biggest surprises.

At 6-4, 235 pounds, Rice is built like a linebacker. And he often plays like one, showing abandon as he crashes the lane on a drive or to get a rebound. It comes naturally for a guy whose cousin is former Illinois running back Mikel Leshoure, the school?s single game and single-season rushing leader.

Rice prepped at nearby Centennial High in Champaign, leaving as the all-time leading prep scorer in Champaign-Urban annals. He signed with Drake coming out of high school, excelling in two years. He set a school freshman scoring mark before earning second-team All-MVC honors as a sophomore when he averaged 16.8 points.

After sitting out last season as a transfer, Rice has picked up where he left off with Drake. The junior averages 18.7 points to go along with 5.8 rebounds and 1.9 assists for an Illini squad that?s 13-2 and 2-0 in the Big Ten, moving into the polls this week for the first time at No. 23 in the AP poll. Next up is a big test at Wisconsin on Wednesday.

I caught up with Rice as he prepped to play the 15-0 Badgers, who rank No. 4 in both polls.

Q: How big is this Wisconsin game to show the progress and mettle of this Illinois team?
A: They are No. 4 in the country. They hit a lot of 3?s. We are going to try to limit their 3?s and play good defense. They are a good team. This is a big game to show what type of progress we have made.

Q: Did you envision this type of success when the season began? Most had modest expectations for Illinois prior to the season.
A: We all have done a lot of hard work, the coaches and players, beginning with time spent over the summer. The coaches and teammates all have put me in position to be successful. We always expect to do well. This team has some talent and it works well together.

Q: How hard was it to sit out last season after transferring from Drake?
A: It was really hard, but I tried to focus on making my teammates better. I tried to push them in practice to work hard. And I feel like I did that. That team got to the NCAA tourney. I also was able to work on my game, my shooting, defense, ball handling.

Q: You are a native of Champaign. How come you didn?t come to Illinois coming out of high school?
A: It wasn?t the right fit for me, and I guess I wasn?t what they were looking for. I went to Drake but over time I felt that wasn?t the right place for me and I decided to transfer. It?s all working out now.

Q: Bruce Weber was the Illinois coach when you were coming out of Centennial High. Did he not recruit you?
A: Yes, he didn?t recruit me.

Q: Playing in your hometown has to be a dream come true. Describe that.
A: Yes, it has been like a dream to play in front of friends and family. To be able to share this with them is fun. That?s what it?s about.

Q: When you decided to leave Drake, what other schools were you looking at?
A: Missouri, Xavier, Illinois, Baylor and USC.

Q: At 6-4, 235 pounds, you are built like a linebacker or defensive end. Is there football in your background?
A: I played up until my junior year of high school. But in my senior year, I decided to focus on basketball. I liked playing, my cousin is Mikel Leshoure. We still talk from time to time. He?s with the Lions.

Q: Could you have been a Big Ten football player?
A: Probably if I had kept playing. But basketball is my first love so I went with that.

Q: If the shot clock is winding down, and the ball is in your hands, what?s your best move?
A: I try to get something toward the basket, put the ball on the floor and drive to the hoop. I think driving is my strength.

Q: What do you still want to work on?
A: Getting better at guarding and putting my teammates in position to score. I also need to work on my vision and court awareness. You always can become a better teammate, work harder and play better defense. Coach Groce is always on us about that. You have to play D. He?s very intense.

Q: You lead the Big Ten in scoring with an 18.7-point average. Could you have fathomed that in August?
A: No. But my teammates put me in that position. Teammates are being unselfish. I am fortunate to be here and wanna represent Illinois as best as possible.