Tom's Take: No shame in Iowa falling to LSU 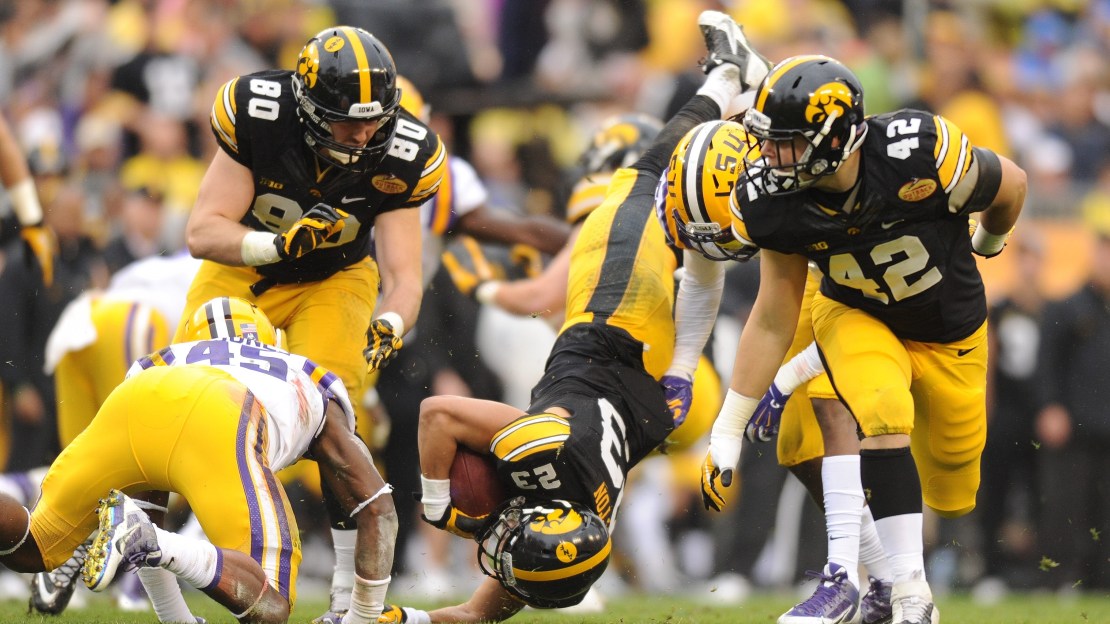 Yes, Iowa lost, 21-14. But it?s no shame in falling to an uber-talented LSU team, which took the opening kickoff and went 79 yards on 12 plays-all runs—in taking a 7-0 lead en route to a 14-0 halftime edge. That set the tone in a game that was more lopsided than the final score indicated.

The defeat ends a three-game Hawkeyes? winning streak in what was a tremendous bounce back season for Kirk Ferentz?s crew that went from 4-8 in 2012 to 8-5 this season.

Best play: With LSU leading, 14-0, and driving at the Iowa 48-yard line midway through the third quarter, Hawkeyes safety John Lowdermilk intercepted a pass and would have returned it for a score had he not let go of the ball before crossing the goal line. No matter, Iowa punched it in for six a few plays later.

Best player: LSU RB Jeremy Hill was a beast, running 28 times for 216 yards and two touchdowns (7.7 ypc). He helped ice the game for the Tigers, busting off runs of 28, 20 and 37 yards in LSU?s final scoring drive in the fourth quarter to give the Bayou Bengals a 21-7 lead.

Best moment: Iowa made a game of it at the 5:52 mark of the third quarter, when Mark Weisman bulled over from two yards to cut LSU?s lead to 14-7. The score was set up after Lowdermilk's aforementioned interception.

Best stat: 3, turnovers for Iowa, which had two interceptions and a fumble. Combine that generosity with an attack that struggled all game, and the Hawkeyes faced an uphill battle all afternoon vs. a talented LSU club that had just one turnover, converted 10-of-21 on third downs and won time of possession 34:54-25:06.

Offense: F. God bless coordinator Greg Davis. He tried different things, running a quick pace ? multi-receiver sets … empty backfield ? none of it really made a difference vs. what was a young LSU defense that had eight players drafted off of last season?s unit. The Hawkeyes had just 233 yards. The running game was anemic, as Iowa ran 37 times for 76 yards (2.1 ypc). The passing wasn?t much better, as the Hawkeyes hit 13-of-30 attempts for 157 yards.

Defense: C. This was a limited LSU offense that was playing without injured quarterback Zach Mettenberger. True freshman Anthony Jennings made his first career start. And, he often looked like a true freshman. So, the Bayou Bengals had to rely on their running game. Good idea. LSU smashed the Hawkeyes with 220 yards rushing, which made up for only 82 passing yards.

It was over when: Jake Rudock left the game with an injury at the end of the third quarter, giving way to C.J. Beathard for the final 15 minutes. Rudock wasn?t setting the world on fire, as he hit just 9-of-22 passes (41 percent) for 102 yards with an interception. But Rudock is a more seasoned hand than Beathard. Sure enough, in crunch time with the Hawkeyes driving for the tying touchdown, Beathard tossed a pick.

What worked: The pass defense was good, as LSU hit just 7-of-20 passes (35 percent) for 82 yards with an interception. Of course, the fact the Tigers played a true freshman quarterback helped the Hawkeye defense. And the fact LSU could run with relative ease played a role in that poor passing effort by the Tigers.