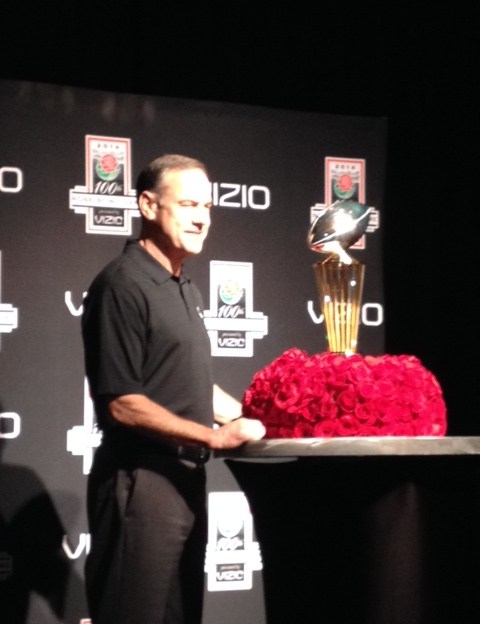 Well, that was a New Year?s Eve Penn State fans never will forget, as news of Bill O?Brien bolting for the Houston Texans broke. Reaction was swift-and largely positive. Here is what Dan Wetzel of Yahoo! had to say about it.

And David Jones of Pennlive.com has his usual strong take here, noting O?Brien arrived and left at the right time.

Here is what Cory Giger of the Altoona Mirror thinks will be the criteria for the next coach.

I think the next boss should be an offensive coach, like O?Brien. And that man should be San Francisco 49ers offensive coordinator Greg Roman, who interviewed for the post the last time it was open.

The stories have pretty much been written out concerning these bowls. But this is a fresh angle from the Orange Bowl. Clemson pays offensive coordinator Chad Morris $1.3 mil per year, the highest salary for any assistant. Could Ohio State ever dole out that much for an assistant?

HawkCentral.com has one last look at the Outback Bowl between LSU-Iowa, this a nice video preview from writers Rick Brown and Andrew Logue, who give you five things to watch.

After viewing this, you get a good idea of what the Hawkeyes will be up against. Woof.

The great Tom Oates of Madison.com thinks if Wisconsin beats South Carolina in the Cap One Bowl, it can be counted as a great team. Interesting. I guess I?m not so sure a win over this South Carolina team would mean greatness for the Badgers. How can you be ?great? and not win any title? But, whatever.

And there is this on Michigan State?s plate with the Rose Bowl on deck: Report says Texas wants to speak to Michigan State about its vacancy.

Oh, boy. On Monday, Michigan State athletic director Mark Hollis said he and Dantonio were moving forward towards a new contract and described both sides as "comfortable" to where the negotiations were. Stay tuned. Still, I would be STUNNED if Dantonio left East Lansing. But, this is Texas we are talking about. It?s the Farrah Fawcett of college grid job. (Wow, that was a dated reference.)

I wrote about this yesterday, but here is a take on what Michigan State?s showing in the Rose Bowl will mean to the Big Ten?s rep from Steve Greenberg of the Chicago Sun-Times.

Starting with the 2010 season, the league is 9-18 in all bowl games. After New Year?s Eve, the record gets even worse: 4-13. Most painful of all is what has gone down in Pasadena, Calif. In their last 10 Rose Bowls, Big Ten teams are a combined 1-9.

Amelia Rayno of the Minneapolis Star-Tribune has some thoughts on each Big Ten team-and ranks ?em, too–with conference play opening.

I like her No. 1 team: Wisconsin. I think the Badgers are the best team in the league. Yes, the Badgers ? not the Buckeyes or the Spartans.

Indiana is a fun team to watch, huh? Lots of athletic talent. But, those turnovers. Wow. Sloppy, sloppy, sloppy. Unless they get trimmed, the Hoosiers may be a .500 team in the Big Ten. You know, win at home; lose on the road.

How many times will we see the clip of Woody Hayes slugging a Clemson player on Friday when Ohio State plays Clemson in the Orange Bowl?

What a start to the Big Ten season for Illinois, huh? A gutsy overtime home win vs. Indiana.

John Groce is a terrific coach who already is maxing out this roster. I am amazed at how good Rayvonte Rice is. I am even more amazed no Big Ten school inked him coming out of high school in Champaign. How did he end up at Drake, for crying out loud? Regardless, this will be a fun Fighting Illini squad to watch all season. And, it just may be an NCAA team if it gets good play on the interior and rebounds.

Look, everyone knows OB had tough job. And he was making $3.3 mil to do it. I don't want to hear bunch of complaining from mega rich coach.

My take: Yes, he knew what he was getting in to.

Despite a rather singular history, some current Penn State football players will have had four head coaches by the end of their career.

My take: Amazing. Penn State has gone from a bastion of stability to a turnstile.

My take: Too long.

My take: He already is an icon.

Really have respect for Aaron Craft. He was the difference-maker Tuesday and scored only 7. He had 10 assists, no turnovers and 8 rebounds.