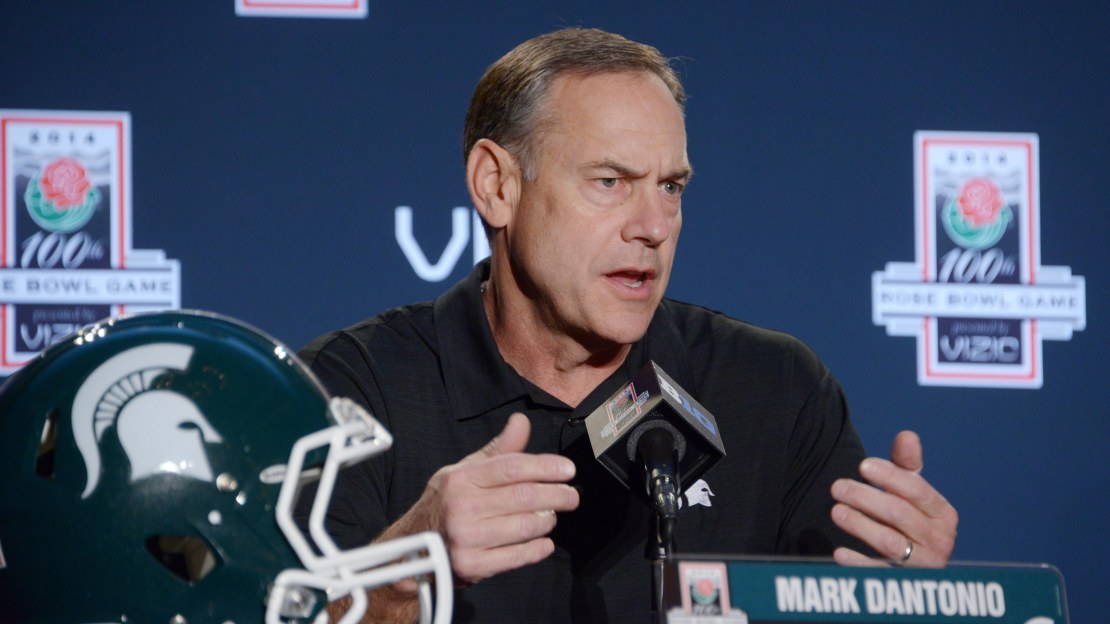 So, the postseason hasn?t gotten off to a stellar start for the Big Ten. The league is 0-2, as Minnesota lost to Syracuse in the Texas Bowl and Michigan got drubbed by Kansas State in the Buffalo Wild Wings Bowl. But all is not lost. The Big Ten has five bowls left, offering plenty of opportunity for redemption and image rehabilitation.

Tomorrow, the Big Ten plays four bowls games. (Ohio State will play Clemson in the Orange Bowl on Friday.) The big one is the Rose Bowl, where Michigan State will take on Stanford in the 100th ?Granddaddy of them All.?

Obviously, it would be great for the Big Ten if the Spartans can win. The Big Ten needs it. Pasadena hasn?t been kind to Jim Delany's league  in recent years. The conference has won one Rose Bowl since Wisconsin downed Stanford after the 1999 season. That was when Ohio State topped Oregon in the Rose Bowl after the 2009 season.

So, that?s a 1-9 mark in the last 10 Rose Bowls for the Big Ten. This is really a stunning stat. To win just one time in the last 10 trips to Pasadena, the league's anchor bowl, since the 1999 season is stunning. And sad.

But the Big Ten will be judged the most by what it does in three games vs. the SEC on New Year?s Day: Wisconsin vs. South Carolina in the Capital One Bowl; Nebraska vs. Georgia in the Gator; Iowa vs. LSU in the Outback.

The two leagues constantly are compared, and rightly so. They are the two biggest, most powerful conferences in the nation. They are the Coke and Pepsi of college football.

[ MORE: See all of our Big Ten bowl coverage ]

Each league features monster schools, steeped in tradition with massive fan bases and budgets. They are the envy of every league. But the Big Ten hasn?t played like a behemoth in recent years, while the SEC has been a 10,000-pound gorilla.

All together now: The SEC has won the last seven BCS national championships. The Big Ten? It has won one since the 1997 season, with Ohio State taking it all in 2002 after its monumental upset of Miami (Fla.) in the Fiesta Bowl. Michigan shared the title in 1997. Before that, you have to go back to 1968 to find the Big Ten's last "major" national title, won by Ohio State.

And when the teams have met in the postseason of late, the result often has favored the SEC. Here is a look at the Big Ten?s recent record vs. the SEC in bowls since the 2005 season. Over that span, the Big Ten is 8-13 vs. the SEC.

2011 season: 1-2 (Ohio State lost to Florida in the Gator; Michigan State beat Georgia in the Outback; Nebraska lost to South Carolina in the Capital One.)

2010 season: 0-3 (Michigan State lost to Alabama in the Capital One; Penn State lost to Florida in the Outback; Michigan lost to Mississippi State in the Gator.)

2009 season: 1-1 (Northwestern lost to Auburn in the Outback; Penn State beat LSU in the Capital One.)

2008 season: 1-1 (Iowa beat South Carolina in the Outback; Michigan State lost to Georgia in the Capital One.)

2007: 1-2 (Ohio State to LSU in BCS title game; Wisconsin lost to Tennessee in the Outback Bowl; Michigan beat Florida in the Capital One.)

2006: 2-1 (Penn State beat Tennessee in the Outback; Wisconsin beat Arkansas in the Capital One; Ohio State lost to Florida in the BCS title game.)

2005: 1-1 (Wisconsin beat Auburn in the Capital One; Iowa lost to Florida in the Outback.

So, like it or not, the nation will make a storyline of the Big Ten-SEC battles on New Year?s Day-and rightly so. The postseason is the best chance for us to compare conferences. The SEC has become the measuring stick of college football. And, as you can see from the aforementioned data, the Big Ten hasn?t come close to measuring up.

If the Big Ten stumbles and goes, say, 1-2 or 0-3, you can bet the critics will howl and the jokes will fly. If the Big Ten can go 2-1 or better, America will have to take heed.

What do I think will happen on Wednesday? I think the Big Ten likely will go 1-2, with Wisconsin winning and Iowa and Nebraska losing. But, we shall see.

America will be watching. And judging.

Yes, the Big Ten isn?t guaranteed a spot in the Rose Bowl every season since the advent of the BCS in 1998, but I was surprised the Golden Gophers fell to Syracuse. That was a 6-6 Orange squad that had to score last-minute touchdown to beat Boston College in the finale just to be bowl eligible. This was an 8-4 Minnesota club that notched its most victories since 2003.