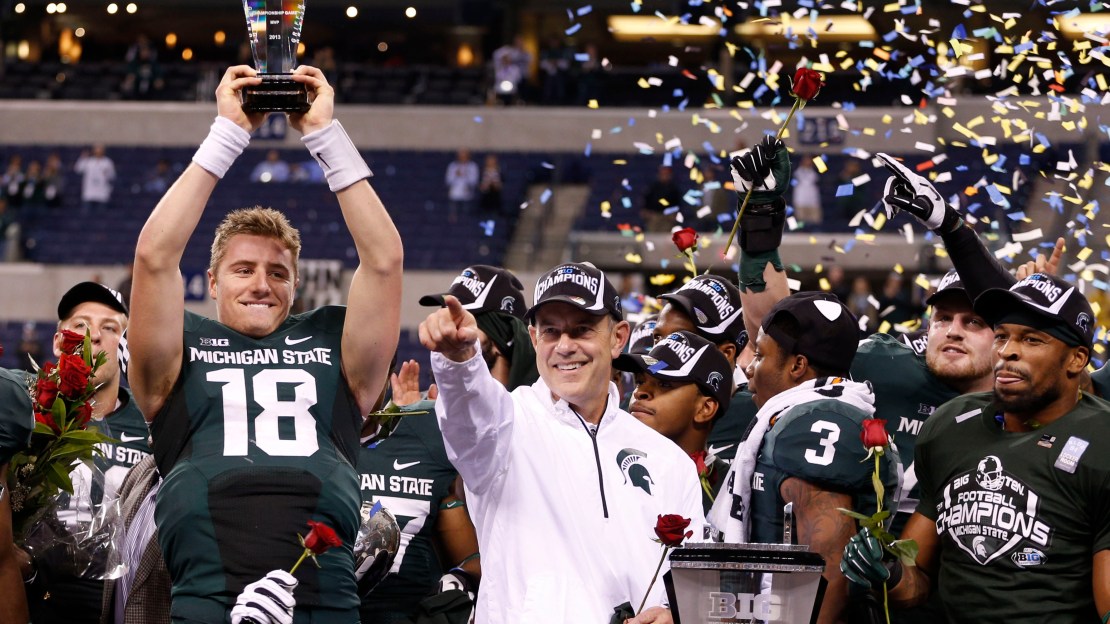 The Rose Bowl is right around the corner. And, Michigan State hopes to not just make a statement about its program-but also for the Big Ten. And, the Big Ten needs it. Badly.

Minnesota lost to Syracuse in the Texas Bowl. Michigan got drummed by Kansas State in the Buffalo Wild Wings Bowl. Big Ten 2014 arrivals Rutgers (Notre Dame in Pinstripe Bowl) and Maryland (Marshall in Military Bowl) also lost their bowls. This isn?t a good start to the postseason for the Big Ten. The Big Ten was 2-5 in bowl games last season and 4-6 two years ago.

?You represent the Big Ten Conference," coach Mark Dantonio said. "We're representing not just ourselves but an entire group of people. As Big Ten champion, that's part of the deal.

"We understand what we're playing for, I think there's a statement that has to be made."

I wonder if Dantonio knows this: The Big Ten has just one win in Pasadena since 2001.

"Anything we can do for the Big Ten, we want to do it," linebacker Denicos Allen said. "I think we're one of the toughest conferences in the nation. To come out here, on this stage to get that opportunity to prove it is great."

Penn State isn?t in the postseason, but its coach Bill O?Brien has been making plenty of headlines. Numerous reports indicate he has interviewed for the Houston Texans job. And he could be a target of the Cleveland Browns.

If O?Brien does bolt, hiring a replacement may be difficult since the new coach wouldn?t know who his ultimate boss would be.

Cory Giger of the Altoona Mirror says O?Brien?s flirtations help his nation rep. But if he left now, it would hurt his legacy with fans.

What? You think he cares about his legacy? Regardless, O?Brien already has done more than enough at Penn State to secure his legacy. He owes no one anything.

Minnesota?s Texas Bowl loss to Syracuse was a tough pill to swallow. Listen and watch Jerry Kill explain in this video.

Young stud tight end Maxx Williams won?t need surgery on the knee he hurt. That?s good. But, what?s the staff gonna do at quarterback? Philip Nelson started, struggled and was benched. Mitch Leidner took over and excelled. Chris Streveler also will enter the mix in the spring. Kill won?t say what he?ll do. Gonna be a fun spring in the Twin Cities!

Who were the 20 best Buckeyes of 2013? The astute gang of Cleveland.com ranks ?em.

Sam McKewon of Omaha.com has 10 moments that defined Nebraska?s 2013 season.

McKewon has the game-winning drive vs. Michigan at No. 1 on his list. Really? How can it not be the Hail Mary that the Cornhuskers used to beat Northwestern?

More Nebraska: Tom Shatel of Omaha.com says success isn?t something you can count on with Nebraska football. It?s hard to type that.

Shatel says nine wins is a magic number for Nebraska coaches. If the Huskers can beat Georgia in the Gator Bowl, coach Bo Pelini will have his sixth straight nine-win season. And the jury can decide what it means, says Shatel.

Some will say that nine wins was a good year, considering the starting senior quarterback missed most of the season, the offensive line hobbled around and the defense was on training wheels.

Others will argue that they'd better win nine, considering they have only three wins against teams with winning records - FCS team South Dakota State and 7-5 Michigan and Penn State. And don't forget the Hail Mary.

Iowa?s defense is a testament to what film study can do for a unit.

It made the unit faster, smarter and, well, more together.

I bet you didn?t know this: Wisconsin has been held under 200 yards rushing in each of the last two games: at Minnesota and vs. Penn State. If that happens again in the Capital One Bowl vs. South Carolina, it won?t be good.

Wisconsin rushed the ball for at least 218 yards in nine of its first 10 games. The exception came in the loss at Ohio State, when UW rushed 27 times for a season-low 104 yards.

Poor Mitch McGary. He?s now dealing with a back injury that could keep him out for who knows how long. I wonder if he wishes he had turned pro?

There is an overriding question hanging over Iowa?s basketball team: Will this be the one that returns to the NCAA Tournament for the first time since 2006?

And while we?re at it, another question: Will this be the first Hawkeye team to win an NCAA game for the first time since 2001?

Right now, the odds are better than good. Iowa, 11-2, has been ranked in the media and coaches polls for six weeks and counting entering Tuesday?s Big Ten opener against Nebraska at Carver-Hawkeye Arena.

All those defenders of the BCS were right. A playoff ruins the regular season. Just look at the NFL today. Booooooooooring.

My take: People who defended the BCS for years often didn?t know how silly they looked.

Final word on Michigan's 7-6 misery: They do have young talent, which is why lack of development was puzzling. This is on Hoke and staff.