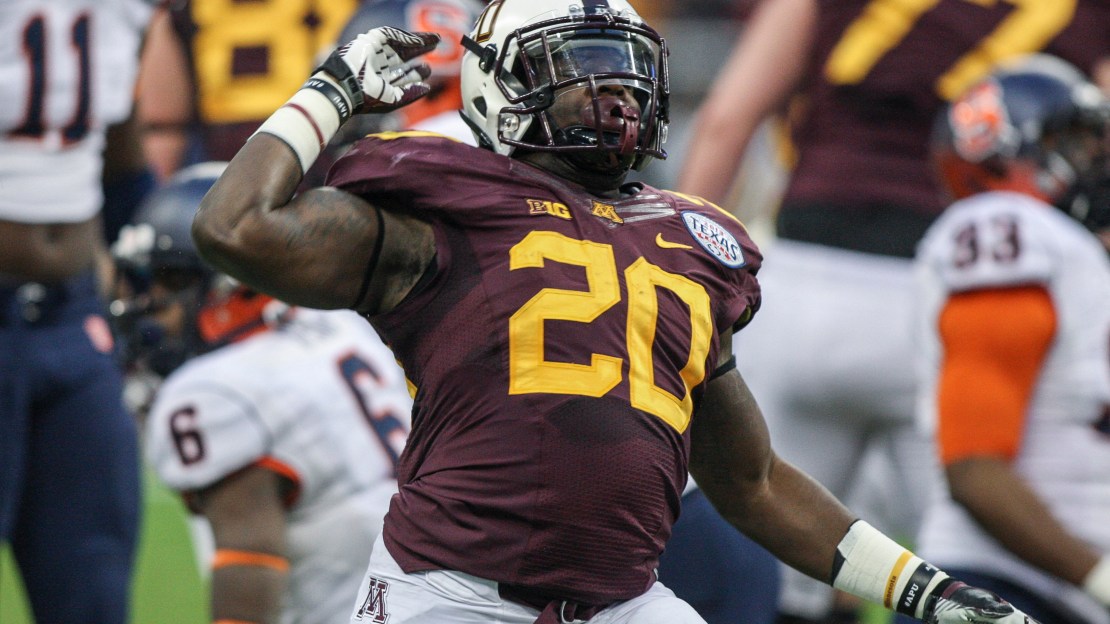 Minnesota's memorable 2013 season came to an unsatisfying close Friday night with a 21-17 loss to Syracuse in the Texas Bowl. Leading 17-14 with just over two minutes remaining in the game, Syracuse got a 70-yard punt return from Brisley Estime, which eventually set up the game-winning score for the Orange with just over a minute remaining.

Minnesota's bowl skid is now at six games, with the program's last postseason win coming back in 2004.

Best play: Leading 17-14 late in the fourth quarter, Minnesota was unable to ice the game with its usually dependable and grinding ground game. The Gophers had to punt with less than two minutes left in the tilt. But Peter Mortell out kicked the coverage, as the Orange?s Brisly Estime ran back the punt 70 yards to the Minnesota 14. Five plays later, SU quarterback Terrel Hunt scrambled 12 yards for what proved to be the game-winning score.

Best player: Syracuse quarterback Terrel Hunt made the plays and was a steady force. He hit 19-of-29 passes for 188 yards and ran 15 times for a team-high 74 yards and two touchdowns, including the winning score from 12 yards out with 1:14 left.

Best moment: Jerry Kill spent most of the first half coaching from the press box, which had been his M.O. since returning from health-related issues. But he coached the entire second half from the sideline. And the Golden Gophers came to life with 14 second-half points. It was good to see Kill back on the turf.

2014 goals, find a consistent QB. Find receivers that can catch.

Best stat: Syracuse kept alive its streak of not allowing a 100-yard rusher all season, as David Cobb carried 18 times for 91 yards. It was the second time in three games he failed to eclipse the 100-yard rushing mark. Cobb had just 34 yards on 10 totes in the first half, when the Gophers trailed, 7-3.

Offense: C. Minnesota?s bread-and-butter is running the ball, entering the Texas Bowl averaging 200.9 yards on the ground. Alas, the Gophers had only 127 yards on 38 totes (3.3 ypc). And the quarterbacks were inconsistent, too. Philip Nelson started, struggled and was benched for most of the second half. Mitch Leidner had his moments, rallying Minnesota from a 14-3 hole in the second half to a 17-14 lead with 12:34 left in the game. The Gopher passers had two TD tosses–by Leidner–and 224 yards but finished a combined 13-of-30.

Defense: C. Syracuse kept Minnesota off balance for most of the game, notching 396 yards and converting 7-of-14 on third downs. The Orange had 188 yards passing and 208 yards rushing.

Special teams: D. Yes, Minnesota stuffed a fake field goal in the first half and saw Syracuse miss a 45-yarder in the second half, but the 70-yard punt return in the fourth quarter that set up the winning touchdown was a killer that brings this grade way down.

It was over when: Syracuse quarterback Terrel Hunt sprinted untouched on a scramble from 12 yards out with 1:14 left to give the Orange a 21-17 lead. The score was setup by a monster 70-yard punt return. Minnesota made one last valiant effort, with Drew Wolitarsky dropping a potential game-winning touchdown pass on a desperation heave from 39 yards out on the second-to-last play of the contest. The Gophers have now lost six bowls in a row. And they finished the season on a three-game losing skid after opening the year 8-2.

What worked: Philip Nelson struggled mightily on the first drive of the second half. Mitch Leidner took over and never left the game. Good call. He finished 11-of-22 for 206 yards and two touchdowns, often carrying a Minnesota offense that broke a 13-quarter touchdown-less drought on a Leidner-to-Maxx Williams 20-yard TD toss early in the fourth quarter.

What didn't work: Rushing defense. Syracuse was able to control the line of scrimmage, running 46 times for 208 yards. QB Terrel Hunt and big back Jerome Smith each ambled for 74 yards. Minnesota was allowing 154 yards rushing.