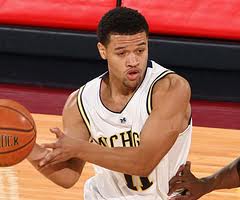 In 2006, he tried out for Michigan?s basketball team and was awarded a walk-on spot. Two years later, he earned a scholarship, was named a co-captain and Academic All-Big Ten while helping Michigan to its first NCAA Tournament appearance in 11 years.

Upon earning his bachelor?s degree in 2008, Merritt decided to dedicate his career to working hard for underserved youth through his company, Merit.

Merit is a cause design company that sells fashionable and quality clothing and donates 20 percent of all sales to underprivileged youth.

?We?re a true fashion brand,? Merritt said. ?We?ve spent years developing a product as it relates to our fabrics, and the comfortability is really big to us, so we?re really focused on the product.?

While clothing line is the foundation, the cause is much more important.

?The overarching goal here is to bring more awareness and impact to youth and education,? Merritt said. ?We have two prongs of how we go about that. One is to really increase funding for that, so we have our for-profit fashion brand, Merit, from which 20 percent of every single purchase goes to fund college scholarships for underserved yhttps://btn.com/wp-admin/post-new.phpouth in Detroit. We also have a non-profit arm to increase actual access to college.?

That non-profit arm is a program called FATE, which was launched last year. Merit went to the Jalen Rose Leadership Academy and presented the program to the entire ninth-grade class.

Meritt invited the ninth graders to identify what they want to do when they grow up, how they plan to get there, and submit an application for the program. Twenty-two students applied and all were accepted, plus a later addition which brought the total to 23.

They travel from Detroit to Ann Arbor one Saturday a month to participate in workshops with companies that have come on board such as Zingerman?s, Google, and Fathead.

?On a monthly basis we are putting on interactive engaging workshops for our students and have partnered with a big group of companies and organizations to help us do that,? Merritt said. ?So by the time our kids graduate high school they will have done about 40 workshops through their high school career, preparing them to embrace their education and becoming what we call world class citizens.?

Merritt credits his upbringing in a two-parent household with a minister father and his Michigan basketball experience for inspiring his career path.

?Coming in and doing whatever was needed for the team, you just really see the importance of laying down personal goals for the goal of the team, laying down personal ambitions for the betterment of a group of guys that are all striving towards one goal,? Merritt said. ?I don?t think I would be the leader that I am now and it?s something I still harp back on when I?m talking to youth or people on our team when it relates to what?s needed to reach a goal.?

Merritt invites others to get involved by spreading the word about Merit, coming into the store on South University Ave. in Ann Arbor, or visiting the website to purchase products and become a Merit ambassador.